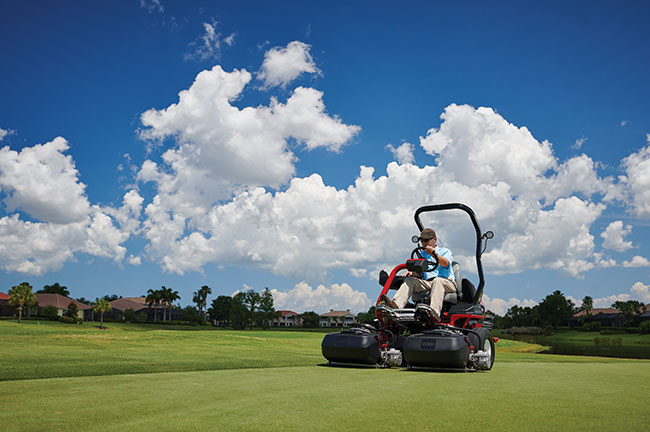 The electric TriFlex mower from Toro is a piece of equipment that has been embraced at the Capilano Golf & Country Club in West Vancouver. Photo courtesy of The Toro Company

Agrowing consciousness toward an emissions-free world is being experienced virtually everywhere – in industry, travel and home living. With each passing year, there are more cars on the road that are powered by batteries. Power generation is turning the corner toward cleaner energy, and more and more homeowners are adapting to battery-powered mowers, trimmers and edgers.

Januszewski was among the education session speakers in March at the Canadian Golf Course Management Conference, which was delivered virtually this year amid the COVID-19 pandemic.

“You would have to have a visual impairment if you’ve not seen the proliferation of battery-powered equipment now available,” he said.

Battery power isn’t a new concept, Januszewski said, noting 1890 saw the introduction of the first electric car that was capable of reaching a speed of 23 kilometres per hour. Electric trains were also used to transport coal from underground mines so that their motors could be spared of using precious oxygen.

These early generation vehicles were powered by lead acid batteries. Today, the lithium-ion battery is the preferred choice, having evolved exponentially over the years from its original form. “Not that spectacular” at the outset, the vast improvements made to the lithium-ion battery have enabled it to power everything from a toothbrush to cars, aircraft and ships.

“Virtually every tool that is powered by an internal combustion engine now has a battery-powered counterpart.”

Januszewski said smaller battery-powered devices are fairly simple, requiring a fully charged battery to be inserted into the item so that it can be operational.

“For a toothbrush, that works OK, but for a commercial-grade, battery-powered rotary mower, there’s a bit more to it.”

Among Capilano’s fleet of equipment are a number of battery-powered tools made by some of the industry’s leading manufacturers. With increased battery use, however, comes the need for increased training, Januszewski said.

“A lot of techs have a tough time with electrical stuff because electricity is one of those things you can’t necessarily see.”

He suggested technicians who aren’t adequately schooled in the troubleshooting and repair of electrical equipment should learn some basics, either at a local technical school or through online training. “Poking around” with a test light, for example, can cause significant damage to the equipment or physical harm to the inadequately trained technician.

“Electrical machines have different handling requirements and pose hazards that are different than what they’re used to.”

“It eliminates almost all leak points.”

The electric TriFlex mower from Toro is a piece of equipment Capilano has recently embraced. Reels are electrically driven and are lifted and lowered electrically, and the machine’s propulsion is electric. These attributes contribute to decreased vibration, reduced maintenance and less noise. With about 175 neighbours encircling the golf course, a visit from an angry homeowner is almost guaranteed if internal combustion engine-powered equipment is fired up before 7 a.m.

Lithium-ion’s downside
The biggest downside to lithium-ion battery-powered equipment right now is cost, Januszewski said, suggesting commercial-grade equipment can be two to three times higher than that of internal combustion-powered equipment. Maintenance shops may also need to upgrade their electrical service to ensure there is sufficient energy available for charging. The shop at Capilano underwent renovations a few years ago, and electrical upgrades were made to address its inadequacy.

“Out of the gate, they were great. After three months, they were useless.”

“We can thank Tesla for that because they’re the ones that really invested heavily in lithium-ion batteries to get it to the next level. But it’s still evolving.”

Januszewski said there are still plenty of unknowns associated with lithium-ion batteries, including the risk of fire. The risk of handling a combustible liquid fuel is replaced with the potential danger of dealing with the thermal runaway of a lithium-ion battery. The disposal of large lithium-ion batteries that have reached the end of their life expectancy presents a different hazardous waste stream and one that isn’t cheap.

He said some manufacturers may claim the operating cost of a lithium-ion battery-powered piece of equipment is close to zero. But when using backpack blowers, for example, a cable is needed to connect the backpack to the implement. The cable has a finite life that is often compromised by continuous plugging and unplugging as well as coming in contact with loose sand and grass. The cable costs about $300, he said, making it an operating cost.

Backpack blower noise
Although most lithium-ion battery-powered types of equipment are quieter than their gas-powered counterparts, operators need to be mindful of backpack blowers, Januszewski said, noting that measuring sound output isn’t as simple as using a decibel meter. Sound involves three separate elements: amplitude (how loud it is), duration (the length of time one is exposed to noise) and frequency (the noise’s pitch).

The ”jet engine-like” sound can be mitigated as long as the operator doesn’t have his back to the homeowner, he said.

Safety is just as crucial in the maintenance of lithium-ion battery-powered equipment as it is with gas-powered tools and machinery. Before beginning any type of maintenance, the unit needs to be locked out. It if has a key, it should be removed and placed in a pocket. If there is no key, the battery needs to be disconnected.

“When the machine is on but not operating, it’s dead quiet and you don’t hear anything until you pull the trigger, and that can be nasty if your finger is in the wrong spot.”

Jewelry worn on the hands or wrists should be removed before any type of maintenance work is done, Januszewski said.

“Rings and watches are great conductors of electricity and can make a real mess if they shorten something out while they’re on your wrist. Your ring could touch a couple of terminals, turn red hot and badly injure your finger. Rings and watches can also catch on equipment – electrical or not.”

As little as 50 volts of electricity will stand a person’s hair on end under the right conditions. Commercial-grade battery-powered equipment exceeds 80 volts. A charger is powered by a line voltage of 117 volts. Januszewski said because it’s alternating current, 117 volts actually works out to be 170 volts. Golf course technicians have been around electrical equipment for a long time, but complacency can still creep in, he warned.

“Handle lithium-ion batteries carefully. Don’t drop them or throw them around.”

Lithium-ion batteries can experience thermal runaway if mishandled. The phenomenon causes a fire that can’t be extinguished and continues until everything in the battery is consumed. Temperatures from the fire can exceed 2,000 degrees Celsius.

Januszewski said the batteries must be charged with a charger designed for lithium-ion and with a power supply that has enough current available for the charger. Extension cords should never be used, he added.

Lithium-ion batteries consist of a number of single cells that are interconnected to deliver the voltage and current required. The cells are wrapped together and sealed to form a battery. A battery management system at its end works in conjunction with the charger.

Turf maintenance staff at Capilano bring extra batteries with them when tending to their duties. They are transported in a carrier that prevents them from banging against each other and getting wet.

Januszewski recommended the commercial versions of battery-powered equipment be purchased for golf course use, and not those designed for home use. Consumer-type equipment may be only one-third of the cost of commercial-grade versions, but he figures the costs of commercial equipment will one day fall.