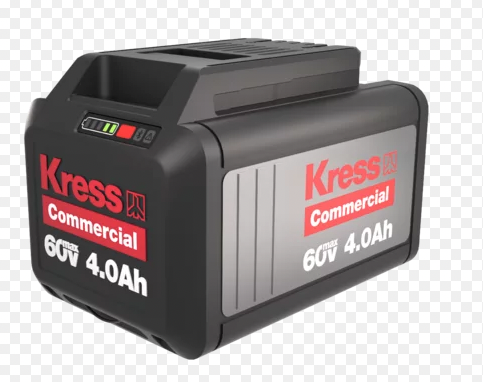 A new battery innovation has been developed by Kress that not only represents a quieter, environmentally friendlier alternative to gasoline-powered commercial landscaping equipment, but which allows batteries to be recharged in minutes.

Until now, in spite of a growing environmental awareness, commercial landscape professionals and facilities managers in the industrial channel have been forced to accept high-emission, gas-powered equipment as the only economical option to provide them with the performance and run time required to complete a full day’s work. Battery-powered equipment has not been a viable alternative due to the expense of multiple battery packs, the hassle of overnight charging and the high cost to replace dead battery packs after only a few months of daily re-charging.

Kress has allowed commercial landscapers and facilities managers to save money and time by switching from gas to battery power. Based on the current price of gas, a typical landscaping
business can recoup the entire purchase price of its Kress battery-powered equipment in less than one season. Kress offers lawn care professionals the opportunity not only to save the planet, but to save money as well.

“Our new Kress battery technology will ignite a dramatic shift in the professional outdoor power equipment industry that has been dominated by loud, dirty gas-powered tools and equipment for the past 50 years,” Don Gao, chairman and CEO of Positec Group, the parent company of Kress, says. “The revolutionary, new Kress battery charges to 80 per cent capacity in only five minutes, provides 10 times more re-charges than current lithium-ion batteries and produces the power and performance that meets or exceeds that of comparable combustion gas-engines. In the time it takes for a short water break, lawn care professionals now can rest assured that their fuel supply – the new powerful, proprietary Kress batteries – will be re-charged and ready to go. No wasted down time, more productivity and more profits for our customers – that’s what Kress is all about.”

As a part of the Positec family of leading brands, Kress has built a reputation for advanced German engineering and has been recognized for designing and manufacturing electric motors for more than 50 years. The Kress brand has unveiled its new line of professional outdoor power equipment which is powered by its exclusive cordless battery technology — specifically designed for commercial lawn care professionals — that will eliminate the need for gas equipment.

The new commercial Kress 8-minute Cybersystem battery platform was engineered and designed specifically to meet the demanding needs of commercial landscapers. The system features both 4Ah and 11Ah battery packs with the ability to recharge each 60v battery pack to 100 per cent charge in only eight minutes or 80 per cent charge in five minutes – the fastest re-charge of any commercial battery system available. Due to its proprietary battery cell technology, each 60v Cyberpack battery is capable to produce up to twice the power output of standard lithium-ion batteries. The added power output allows Kress outdoor power equipment to meet or exceed the same performance as comparable commercial gas-powered machines but with less noise and zero harmful emissions. In addition, the Kress Cyberpack battery can be recharged thousands of times – up to 10 times more than standard lithium-ion batteries.

The extended battery life supports multiple re-charges per day and greatly reduces the cost of replacement battery packs over the life of the equipment. The Kress 8-minute Cybersystem allows commercial landscapers to finally replace their expensive gas-powered equipment without sacrificing performance, power or run time.

The new Kress 8-minute Cybersystem battery platform will power a full line of Kress professional outdoor equipment that includes commercial-grade backpack and handheld blowers, grass trimmers, edgers, chainsaws and hedge trimmers, as well as heavy-duty walk-behind commercial mowers. Each Kress commercial-grade tool is designed and engineered for heavy-duty use with a high-efficiency brushless motor and state-of-the-art features and performance. There are no more excuses to keep operating noisy, high-cost gas equipment or wasting time with cordless battery tools that won’t get the job done.

Kress will introduce the brand’s complete line of commercial-grade equipment and batterytechnology in North America in Q4 2022 in conjunction with the International Equip Exposition (formerly
GIE). Kress is positioned to become a powerhouse in producing professional-grade, cordless outdoor power equipment as it partners with leading equipment dealers in the United States and Canada.