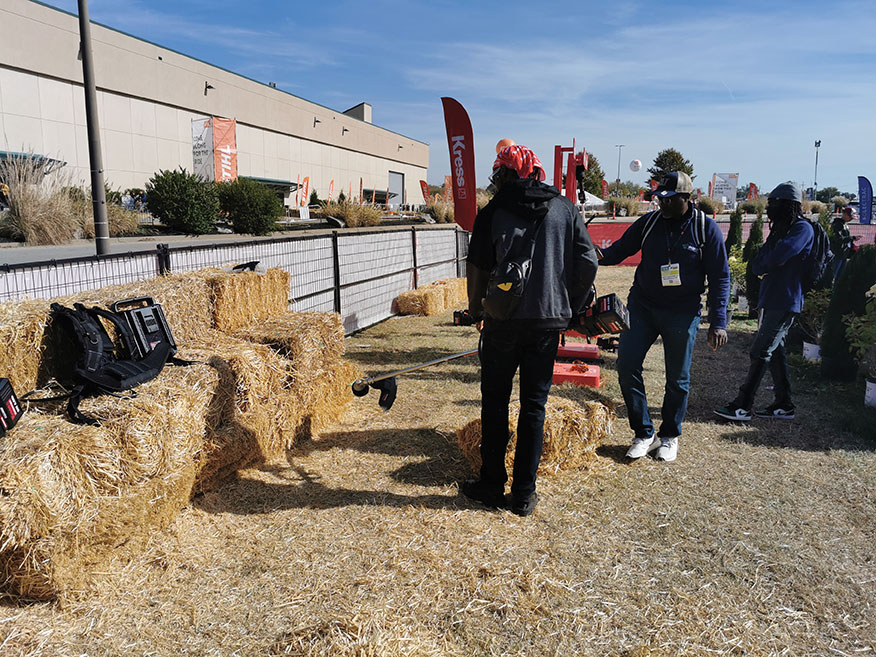 Autonomous. Robotics. Battery. Electrified. These are the new buzz words being heard today in the landscaping, sports turf and even golf industries. Manufacturers of traditional gasoline-powered mowing and landscaping equipment have almost universally tapped into the escalating technology behind robotic and battery-powered equipment, while customers have embraced the ability to operate tools and machinery that deliver similar or higher output and run time yet are significantly more environmentally friendlier and require less labour.

Exhibitors at October’s Equip Exposition (formerly GIE+EXPO) in Louisville, Ky. showcased their latest products for the landscaping industry, placing an emphasis on their electrified and autonomous offerings.

One company – Kress – which has been manufacturing electric tools in Europe since the mid-1960s, recently touched down in North America as part of the Positec Group. Kress’ mantra is “The death of gas.”

David Boyce, Kress’ director of field sales operations in Canada, noted the company’s batteries are at the heart of its ability to deliver everything a landscape professional needs at a job site.

“We’re getting clean, quiet power, longevity and run time, zero downtime, and they continue to remain consistent across their usage,” he said of Kress’ proprietary battery technology. “Our factories were able to create some innovative, revolutionary technology in collaboration with a Canadian university. Over the course of multiple years, we’ve been able to develop something that is far more sustainable in terms of lithium-ion and the chemical composition makeup of that battery.”

Despite a shift in recent years toward battery-powered equipment, gasoline-powered products have continued to retain a strong presence in the industry. Proponents of gas-powered equipment argue that batteries are expensive and take too long to charge. Commercial users not eager to embrace battery technology also suggest that multiple batteries are required to power a single tool and that they don’t hold a charge long enough, which contributes to increased downtime.

“The Kress battery charges to 80 per cent capacity in only five minutes, provides 10 times more recharges than current lithium-ion batteries and produces the power and performance that meets or exceeds that of comparable combustion gas engines,” Positec Group CEO Don Gao stated in a news release.

The charging duration was demonstrated in real time at Equip Exposition. A stopwatch was used to clock the time it took to fully recharge a battery that was down to its last 14 per cent of charge. Kress’ eight-minute commercial Cybersystem battery platform features both 4Ah and 11Ah battery packs with the ability to recharge each 60-volt battery pack to 100 per cent charge in only eight minutes or 80 per cent charge in five minutes.

Gao said each 60-volt Cyberpack battery can produce up to twice the power output of standard lithium-ion batteries, meeting or exceeding the same performance as comparable commercial gas-powered tools but with less noise and zero emissions.

The system is capable of multiple daily recharges and consists of two batteries (4Ah and 11Ah Cyberpacks) and a Cybertank.

Run time is no longer a concern because the battery is always ready to go, Boyce said.

“This has enabled us to open our doors, pull back the curtain and allow the general public and the North American marketplace to come evaluate and assess who we are and what they think of Kress,” Boyce said.

The company is planning its Canadian launch at January’s Landscape Congress trade show and conference in Toronto.

Robotic mowing
Kress and several other companies that exhibited at Equip Exposition are also vested in robotic mowing. Kress introduced its RTKn (real-time kinematic to the power of network) robotic mower which can operate within a given area without the need for perimeter wiring.

Like the Kress robotic mower, Husqvarna’s Ceora doesn’t require perimeter wiring and can mow large areas in parallel lines as if it was human-driven.

Lauren Ulrey, vice-president and general manager of Husqvarna Group’s robotics, said autonomous mowers not only address such concerns as sustainability, emissions and noise, but the labour shortage the professional turfgrass maintenance industry is experiencing. One person can set the robotic mower in motion and simultaneously tend to other duties at a job site.

Systematic robotic mowers are more efficient than autonomous mowers that cut in a random pattern, Ulrey said, adding it’s the direction into which commercial robotic mowers are currently heading. Sports fields and other larger properties are where systematic mowers excel. They can cut in straight lines or chosen patterns.

Randomized autonomous mowers that rely upon perimeter wiring are still ideal for residential lawns, she said, noting perimeter wiring may be recommended on properties where a clear line of sight to satellites isn’t always realized. If a job site is in a heavily wooded area or if it’s surrounded by large buildings, wiring will ensure a consistent connecting signal.

Ulrey said Canada has “blown the doors off” robotic mowing and has been a significant growth area for Husqvarna.

Wisconsin-based RC Mowers introduced its Autonomous Mowing Robot at Equip Exposition, suggesting the machine enables one person to do the work of three. Unlike smaller robotic mowers, the Autonomous Mowing Robot operates like a zero-turn with the operator physically in the driver’s seat to establish a perimeter. Once that’s done, he identifies “keep-out” areas to prevent the mower from entering water and other sensitive landscape features.

From there, the operator can enable autonomy mode and allow the mower to cut unmanned while he engages in other work. Two or three mowers can simultaneously cut a large-acreage site within pre-set perimeters.

Attendees at Equip Exposition were told the Autonomous Mowing Robot doesn’t take breaks, passes all drug tests and is drama-free yet cuts with precision.

California-based Graze’s Beta autonomous mower offers versatility beyond that of simply mowing. Equipped with a 60-inch mowing deck that can cut in pre-set patterns, the unit can also be used to aerate, fertilize, pick up golf balls on driving ranges and put down de-icing agents in the winter.

Company CEO John Vlay described the machine as “the Swiss army knife” of landscaping and lawn care because of the various attachments it can utilize.

A front-end mowing deck, aerator or hopper can be fitted to the autonomous unit which will function without the need for perimeter wiring. Vlay said wiring is both expensive and can easily be broken.

The rotary deck can easily be switched out with a reel blade deck for finer mowing such as golf course fairways. Vlay said the golf course market sets up well for the Graze autonomous mower because fairways and roughs can be cut during the evening hours under limited lighting conditions without inconveniencing golfers.

“Golf is perfect for us, especially the fairways, because they’re mowing them three times a week,” he said.

Virtually the only maintenance the autonomous mower requires is blade sharpening, Vlay added.

Because the mowing deck can be moved upward, three units can be stacked inside a standard trailer, allowing one person to do the job of three people in a single day. 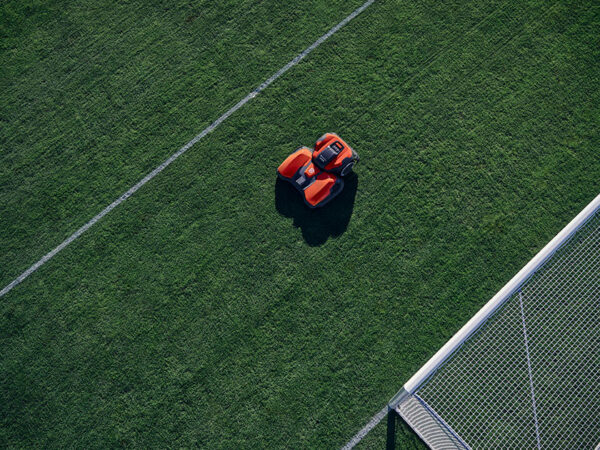 The trend toward electrification
Briggs & Stratton’s Steve Andrews said when he became CEO of the engine maker two years ago, one of the company’s first objectives was “to lean into the electrification trend.” Internal combustion engines will remain an important part of the business for years to come, he noted, “but we know what’s happening with electrification, and new products are really the lifeblood of Briggs & Stratton going forward.”

Ferris, Simplicity and Billy Goat – among the Briggs & Stratton family of companies – have been trending in the direction of electrification.

“There is a wide variety of needs from all these OEMs (original equipment manufacturers),” Nick Moore, director of electrification sales at Briggs & Stratton, said. “Our goal is to make it as easy as possible for any of them to get into the market to reach what the market needs to get greener economies and greener job sites.”

He said one of things the company is striving to achieve is not having to redesign pieces of equipment to mate with their batteries. Moore added the goal is to minimize battery charge time and allow commercial mowers to work all day long.

Stihl CEO Terry Horan said although the company has been North America’s top seller of gasoline-powered equipment the past 13 years, it acknowledges the market is changing and Stihl is adapting accordingly to expand its battery-operated line of landscaping tools.

Carlos Haddad, vice-president and general manager of Husqvarna’s North American professional business unit, said the movement toward battery-powered equipment has increased significantly over the past five years. In 2017, less than five per cent of landscapers were operating at least one battery-type product. The number of users has increased to between 30 and 40 per cent today.

Gasoline-powered equipment will eventually “die” in the landscaping industry, he said, but he predicted it will be “a slow death.”

One gasoline-powered product whose shelf life is expected to continue for years to come is the chain saw. Haddad said the power of gas is still needed to cut through large-diameter trees.

Nevertheless, battery power will account for upwards of 70 per cent of units sold within the next seven years, he predicted, especially among such products as blowers.

The evolution of battery power has most notably been seen in run time, he said. Only five years ago, an operator might get 10 to 15 minutes of run time on a battery charge. Today, with a couple of extra batteries, he’ll be self-sufficient for an entire day.