Power output and run times are rapidly catching up with gas 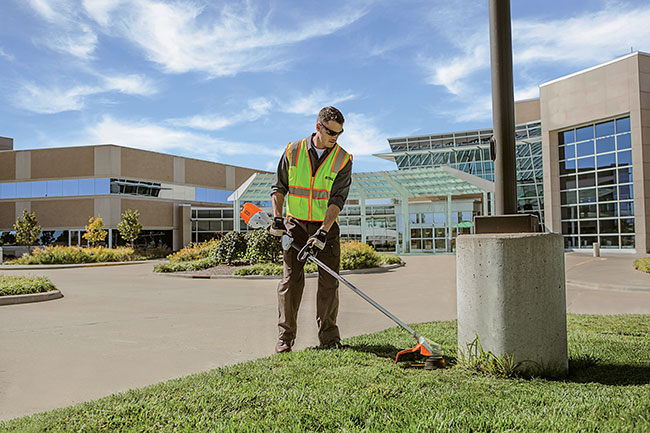 Power output and run times associated with battery-powered equipment are catching up with their gas-powered counterparts. Stihl Limited photo

“The landscape contractor wants a tool that will run longer, and obviously he wants more power,” Hugh Munn, Ontario and Western Canada sales manager for Stihl Limited, says. “The challenge now is to develop batteries that will give us longer run times and more energy.”

That day is already on the horizon, manufacturers of outdoor power equipment believe.

“If you’re a contractor using gasoline today, you will be using battery in the future,” Munn suggests. “I can absolutely guarantee that. If you think of the traditional landscape contractor who does a cut, trim and blow, he or she is going to be transitioning his or her business over the next year to five years to battery.”

“There’s no need to have a fuel and oil mixture like a 50-to-one or a 40-to-one ratio as we and our competitors’ equipment require. It removes any kind of error.”

The ease-of-use attribute of battery-powered equipment is perhaps its best selling point until power output and run time take over.

“Ease of use is literally flipping a switch on and pulling the trigger as opposed to priming, purging, choking, pulling a cord until it starts, and then keeping the machine from not stalling,” Mike McConnell, national sales manager for Echo, says. “Ease of use is definitely high.”

Nevertheless, power and run time remain the key concerns among professional landscapers when shopping for new equipment. McConnell said the first question he is invariably asked by commercial customers at such industry events as Landscape Congress is, “How long is it going to run?” It’s an easy question to answer, he said, when the query is directed toward gasoline-powered equipment. When referring to battery-powered equipment, however, there isn’t a “quick tell” answer.

It’s easier, he said, to explain run time versus working time. If an operator opens the throttle wide open (rabbit mode) on most models of cordless trimmers and then walks away from it, the machine will continue to run for between 45 minutes and an hour. The commercial customer will respond by saying that amount of time isn’t long enough.

“But you explain to them that you don’t do that with that tool and walk around with it with the throttle wide open,” McConnell said. “You walk to the spot and you trim it and you walk to another spot and you trim it. It’s on and off constantly whereas a gas-powered piece of equipment is idling continually, so it is continually burning fuel, although at a lower rate than a wide-open throttle. But the difference with the cordless is that it’s off. It’s not actually consuming any power at that point.”

Munn said the battery-powered business is pulling a point or two away from the gasoline-powered business on an annual basis, “but at some point in time – and I don’t know when that’s going to be – there will be a tipping point and then you’ll see a mass exodus (of gasoline-powered equipment). I can envision a day when a forester will be using a battery-powered chain saw and he’ll be quite happy with it.”

Noise output
The major criticism against gasoline-powered equipment is its noise output, and many municipalities have imposed bans or bylaws regarding their use. Noise bylaws are “different animals” in every single municipality, McConnell said.

“We’ve been involved with a number of different noise bylaws in some pretty key markets throughout Canada.”

Boyce said professional landscapers have come to learn that battery-powered equipment is more of a need than a want when the properties they maintain include schools, hospitals and municipal buildings where high noise levels aren’t tolerated.

In addition to their higher noise levels, gasoline-powered tools have other limitations that prevent their use in certain situations. This has allowed emission-free, battery-powered tools to be used in greenhouses, nurseries and other indoor venues. 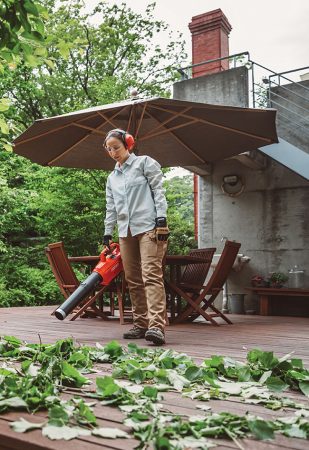 Women and many older workers have come to appreciate the comparatively lighter weight that battery-powered equipment offers, although Munn admitted some older employees remain set in their ways and are reluctant to switch to the newer technology. He added that superior ergonomics associated with battery-powered tools prevent operators from experiencing a lingering tingling sensation afterwards in their hands and fingers once the equipment is put away.

Battery-powered tools are designed to allow the same battery to be used to power a landscaper’s array of equipment. The same battery used in a trimmer can be used in a hedge trimmer or pole pruner, for example.

McConnell said battery-powered technology is poised to take a significant step forward if it is able to draw itself away from packs of batteries situated in a backpack apparatus.

“We can get extended run times just by strapping more batteries on our back, but the landscaper doesn’t want to wear a backpack to trim or run a chain saw. They want to have it in that same package that a 10-ounce fuel tank will do for them.”

He added that when cordless equipment reaches the point of being comparable with gasoline’s efficiency, operating costs are likely to diminish. Batteries, spare battery packs and chargers come with a cost, but that is apt to change once battery technology catches up with the efficiency of gasoline.

Not having to constantly replenish a gasoline-powered tool’s fuel supply throughout the season makes battery-powered equipment a cheaper option.

“Another way of looking at the battery is all you’re doing is pre-purchasing your fuel, and you can re-energize the battery for pennies,” Munn said, acknowledging that although the battery itself is expensive, the cost of charging it over the course of a summer is much less than the cost of fuel. “The math works in favour of batteries because you can re-energize them very inexpensively and you have to factor in maintenance costs (associated with gasoline-powered equipment).”

McConnell said as power, output performance and run times continue to increase, “it’s raising the eyebrow of a lot more commercial landscapers and commercial customers that they can put it in their lineup and see it as a viable piece of equipment.”

Battery-powered tools have few limitations, and even bigger products powered without gasoline are currently available on the market.

“You can do everything today with a battery tool, including mowing the grass,” Munn said. “You can edge, you can trim, you can blow, you can do a hedge, you can use a pole pruner, you can use an extended reach trimmer, you can push a lawn mower, and there is even a manufacturer of battery-powered zero turns.”