Trevor Warner was an aspiring lefthanded pitcher in the late 1990s, attending college in Tennessee on a partial baseball scholarship. But, an ill-timed “comebacker” hit him in the face while on the mound in one game, forcing him to undergo eye surgery. The injury, along with returning to the game too quickly afterward, essentially put an end to his playing aspirations, yet it wasn’t the end to a career in baseball.

As a college player in Tennessee, the Welland, Ont. native and his teammates were also responsible for maintaining their own field. A passion for field upkeep developed, and he returned to his hometown between school years to work in turf maintenance as a summer student.

The love of working outdoors and the sense of pride he felt in providing athletes with the best possible playing conditions was the impetus Warner needed to find his calling. Two decades later, those efforts paid off in his recent selection by Sports Turf Canada as the country’s sports turf manager of the year.

Since 2014, Warner has worn the hat of sports field skilled labourer for the City of Woodstock, Ont., where he manages the turf and field conditions for more than 40 baseball, soccer and football fields.

Reflecting on his baseball-playing past, he said being able to understand first-hand what goes into proper field maintenance can help turn someone into “one heck” of a groundskeeper. Warner recalled a moment from his second year in college when the team’s starting pitchers asked him if he could “fix” the pitcher’s mound to their liking, telling him the mound maintenance that had been left in the coaches’ hands wasn’t up to par.

That love for sports field maintenance, in spite of his playing days coming to an end, “turned into a heck of a career.”

Before coming to Woodstock, Warner enjoyed other stops along the way – each of which were associated with baseball or sports field management and which provided additional experience and skill sets. From Tennessee, he returned to Canada to work in the short-lived Canadian Baseball League in 2003. He became head groundskeeper for the Niagara Stars at their field in Welland, but the plug was pulled on the eight-team league mere weeks into its inaugural season due to poor attendance and an aborted television deal.

The following year, Warner began work with Mar-Co Clay Products – a provider of infield mixes, batter’s box and pitcher’s mound materials, and field conditioners – and watched the company grow during his tenure.

Surprised and speechless
Warner said he was caught off guard at being named Canada’s sports turf manager of the year, adding he learned of the selection during Sports Turf Canada’s virtual annual general meeting in June.

“I was surprised and a little bit speechless,” he said.

Warner’s employment with the City of Woodstock began as a seasonal worker, but it evolved into a full-time position by his second year. He said he has developed a solid relationship with his superiors and praised the municipality for providing him with all the right tools to do the job.

“From a sports field management side of things, having the proper tools is huge. When you can combine good-quality pieces of equipment and the understanding coming from management of why we do what we do on these sports fields, that relationship you can’t beat.”

Warner said if a particular need is warranted, he will fight for it.

“If I can justify and prove it, my bosses have no problem going to bat.”

A stickler for perfection, Warner strives for the “wow factor” when tending to his fields, wanting to deliver the best conditions possible for both the home and visiting teams. At Tip O’Neill Park – the city’s premier baseball field, named for the late 1800s Major League Baseball player Tip (the Woodstock Wonder) O’Neill – the turf is mowed so that its striping “pops” when seen at certain angles.

The park is the city’s only diamond with a grass infield and is sized to big league dimensions.

“This one gets the attention, I believe, that it deserves.”

Woodstock Minor Baseball is the park’s primary user, but out-of-town teams will periodically play there to meet halfway for doubleheaders in a neutral setting. The out-of-town teams come from as far as London and Oakville, and “appreciate and respect” the quality of the field, Warner said.

Tip O’Neill Park was to have been the central site this summer for the Canadian AAA national peewee baseball championships, but the event was cancelled due to the ongoing COVID-19 pandemic. The park had undergone a major irrigation system upgrade in the fall and early spring.

The park is one of more than 20 baseball fields in the city. Among the more than 40 city sports fields, about 15 are lit, irrigated and fenced in, but none is officially considered a Category 1 field, Warner said. 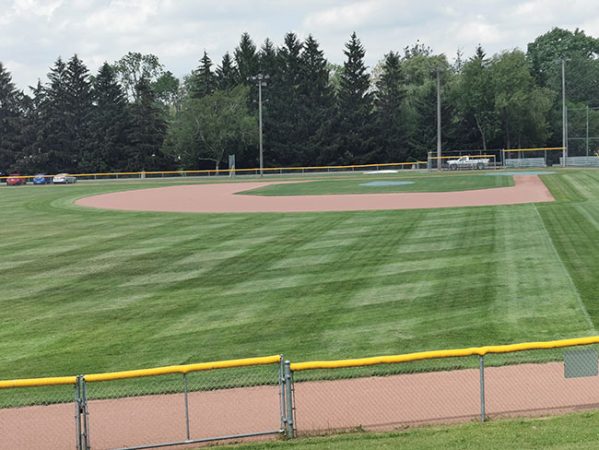 Tip O’Neill Park is the site of Woodstock’s premier baseball field. Its striping “pops” out when seen from certain angles.

A major field overhaul
A soccer field located at the city’s Cowan Park complex was recently given a major overhaul to accommodate football, and could see play on it this fall for the first time since its conversion. It was a project that Warner said he was especially proud of overseeing and one that was largely done in-house, saving the city a significant amount of money.

Two other soccer fields to the west of the new football field are also slated for renovation. Warner said the city was aiming for an Aug. 1 shutdown of the fields, so that they could be ripped up and have the topsoil removed and stockpiled for screening. Efforts will be made to seed the non-irrigated fields in September to ensure they’re ready for play in May or June of 2022.

None of Woodstock’s sports fields bears artificial turf, and that’s the way Warner likes it.

“If you look at the cost of an artificial turf field and took half of that and built a Category 1 football or soccer field and took the other half of the cost and divided that over the lifespan of that field, that money would allow for one heck of a good job for that one field.”

Warner said Woodstock has the proper equipment on hand to maintain such a field, rendering an artificial turf field unnecessary.

“If the money is there and the reasoning behind it is there, they (the city) come through for us and we get what we need to keep these fields proper and safe.”

The arrival of the COVID-19 pandemic in the spring of 2020 raised a number of uncertainties, including what field tasks were allowed and which ones were disallowed, and what should or shouldn’t be done. One of the first decisions made was to raise the cutting heights on the city’s fleet of mowers to lengthen mowing intervals.

“The turfgrass doesn’t know that COVID is happening, so you still need to do certain things.”

Regular dragging
One thing Warner deemed necessary throughout the pandemic was regular dragging of his fields – at least once a week.

“I don’t care if they’re not playing on them all season. You don’t want to go in to a huge renovation project on 20 infields across the city because we didn’t drag.”

He figured that setting aside 15 or 20 minutes twice a week to groom his fields would keep weeds at bay without the expense of costly inputs.

“That’s the way we had to approach it,” he said, adding such a strategy, along with fewer weekly mowing events, freed up time to tackle other projects.

The pandemic has been beneficial in ways, he acknowledged, noting it has allowed sufficient time to train students to properly paint and chalk lines. Warner said he is fortunate to have staff who can effectively operate contour mowers. Even though Mother Nature can dictate mowing schedules, staff finds the time to mow as necessary.

Infield edging is a practice Warner takes seriously, knowing that it can prevent an ongoing series of “band-aid” fixes. By taking the time to do the job right, weeds can be kept at bay for three weeks or a month. Not taking the time needed will result in weeds working “their ugly faces” up time and time again. It’s especially important to set aside time for edging and dragging when fields are being used six or seven days a week and can’t be shut down periodically.

“The scheduling in a normal year is always a tough one because your focus on something is to get it right and get it done, and that to me is the hardest thing.”

Warner said the city has developed good relationships with its field user groups, and he considers none of his fields is overused. The local minor baseball group, for example, has a healthy understanding of the work necessary to keep fields in safe and playable conditions. User groups are “getting it” when covers are placed atop the pitcher’s mound at Tip O’Neill Park and when a synthetic batter’s box covering is laid over the actual diamond box during batting practice. Each measure is designed to retain the right amount of clay moisture needed during game time.

“Anything that helps me out helps them out.”

During the winter months, Warner tends to his equipment to ensure everything is in working order for the spring and removes snow from outside a number of city-owned buildings. Additionally, he attends such education conferences as the Ontario Turfgrass Symposium in Guelph and the Sports Turf Managers Association conference in the U.S.