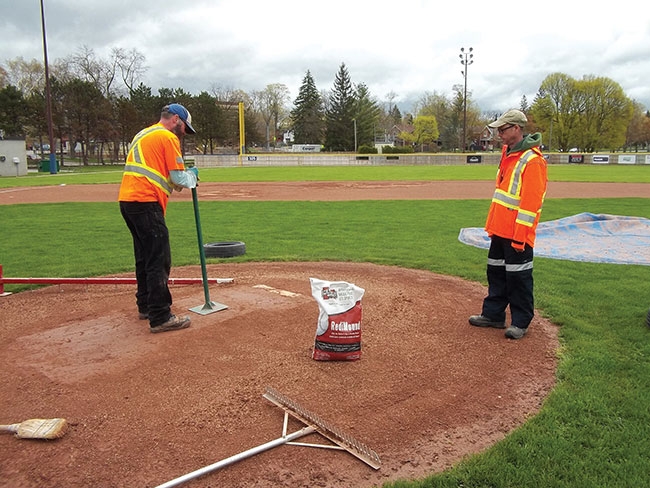 Dave Boehmer, right, confers with a city employee tamping down the pitcher’s mound at Hastings Stadium in Guelph.

Eleven years ago, the thought of being named Canada’s sports turf manager of the year would likely have been the furthest thing from Dave Boehmer’s mind. At that point in his career, he was working in the golf industry as assistant superintendent at Milton, Ont.’s Glencairn Golf Club – a ClubLink property.

But as fate would have it – at a stage in his life when he was starting to look at potential superintendent positions – the City of Guelph was looking to fill the newly created position of sports field operator. Already a resident of the city, he applied for the position and was offered the job.

Over the past 11 years, Boehmer has since climbed the ladder to become lead hand of sports fields and winter maintenance, beginning his third season in that capacity, and oversees three city sports field operators. He said he wasn’t aware he had been named sports turf manager of the year until he attended April’s spring industry forum and annual general meeting of Sports Turf Canada at Toronto’s BMO Field.

Boehmer was nominated for the honour by Ian Ferguson, program manager of turf and sports fields for the City of Guelph, and believes the nod may have come as a result of his relations with his staff.

“I think in his mind, one of my biggest strengths is dealing with the staff,” Boehmer said. “It’s been a combination over the years of him witnessing how I deal with staff and the fact that we can actually take on more and different projects now.”

In his position as lead hand of sports fields and winter maintenance, he supervises Guelph’s three sports field operators in the upkeep of about 40 ball diamonds and upwards of 60 soccer fields of varying dimensions. Also included among the sports turf under his supervision is a lawn bowling green and green space used for Australian rules football and cricket.

The city’s higher end fields are situated within three sports complexes located in different parts of Guelph. Boehmer said the city has an arrangement with the local separate school board to mow and groom its playing fields and look after booking for a number of them. The city also maintains one of the public school board’s fields – a fenced-in facility that is regarded among Guelph’s better quality fields.

“About 90 per cent of the ball diamonds are stone dust,” he said, adding the others are clay, including its premier diamond – Hastings Stadium, which is home to the Guelph Royals of the Intercounty Baseball League.

None of the fields in Boehmer’s care is artificial.

“We’re lacking space for making any new facilities, even to switch one over to artificial turf.”

Land at a premium
He said land is at a premium in Guelph, and there is virtually nowhere in the city to build any new fields to address the challenge of demand outweighing supply.

“We don’t have enough fields to support the user groups, so they’re often overbooked and overused. They’re all overused…pretty much all of them.”

Some fields, he said, are seeing up to about 150 per cent of the recommended usage and sometimes realize double the intended use.

“For what it’s worth, the grass isn’t that much of a problem,” he said, noting when he first began with the city, it didn’t have an elaborate maintenance program. The fields have since undergone regular aeration, are being overseeded more frequently and are being fertilized with a better product. “As far as the grass goes, we have a pretty good program.”

Boehmer described his position as lead hand as “multi-faceted,” saying he is in constant touch with the city’s bookings department to better control the amount of traffic on its fields. The challenge in communicating with the bookings department lies with the degree of staff turnover it has experienced in recent years. Its longest standing employee has been there only one year.

Although he says he maintains a good relationship with the department, it can be a daunting task when suggesting certain fields shouldn’t be played on during wet spring periods or that older athletes shouldn’t be booked to play on smaller fields meant for younger children.

“They’ve (bookings department) gone through a whole bunch of changes, so all the people who used to know things aren’t there anymore. So they can’t circumvent some of the questions and concerns some of the user groups have and funnel them in the right direction.”

Reflecting back on his years in the golf industry, Boehmer said it was comparatively easy for a superintendent to check daily on all 18 of his golf holes to monitor for emerging trends and issues, but it’s a different ball game in the sports turf sector.

“There’s so much to see that I’ll never see it in a day.”

For that he depends on his sports field operators and other staff who see things daily.

“We have it broken up into sections so that we have eyes (for monitoring for things that need attention).”

As far as agronomic practices are concerned, the soccer and multi-purpose fields demand the most attention, Boehmer said.

“For baseball, there are only three guys who run around in the outfield, so that grass doesn’t need as much attention.”

Most of the maintenance of the ball diamonds is concentrated on the skinned infields.

Dave Boehmer, right, confers with a city employee tamping down the pitcher’s mound at Hastings Stadium in Guelph.

Field maintenance days
Although the Royals are the primary user group at Hastings Stadium, the field is also booked for play by the Guelph Minor Baseball Association, which receives the same field treatment the Intercounty team gets. New this year, however, are a few scheduled maintenance days for the ballpark during which no user groups are permitted on the field on the day prior to select Royals’ home dates.

The infield at Hastings Stadium is mainly Kentucky bluegrass while the outfield is a blend with some poa annua in the mix. The diamond has been in its current location for the past century.

Two softball fields are located adjacent to Hastings Stadium – beyond the outfield fence – and are also clay fields. Another field set up for football and rugby is located within the same complex and is used to a large extent by athletes from Guelph Collegiate Vocational Institute who have no field of their own for physical education classes or for football and rugby practices. The field is also popular among dog walkers.

Boehmer said most projects pertaining to the fields in his care are tackled in house, acknowledging he has the necessary staff and equipment with little need to rent anything. Technical support is provided occasionally by the University of Guelph, which is regarded as perhaps Canada’s foremost institution for turfgrass management training.

The university was the training ground for Boehmer’s formal education in turfgrass management. During his nine years with ClubLink, he established relations with personnel from both the university and Guelph Turfgrass Institute and remains in touch with much of the staff.

He began his golf career at RattleSnake Point Golf Club in Milton before leaving for nearby Glencairn to help with its grow-in period. He worked briefly at Greenhills Golf Club in London before moving to Oakville’s Glen Abbey Golf Club for one season to help with the 100th anniversary of the Canadian Open. He returned to Glencairn afterward to become its assistant superintendent.

Boehmer said he began in the turf industry later in life and pursued his formal education three years afterward.

“I put in three seasons at the golf course and realized I better get an education if I want to go any further.”