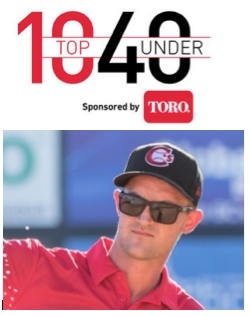 The class of 2019 of Canada’s Top 10 Under 40 has been helping to shape the future of the Canadian turf and grounds maintenance industry since entering the profession, and these young individuals are poised to ensure that the qualities of leadership, innovation and teamwork are in strong supply for years to come.

A turfgrass management graduate of the University of Guelph, Baron was honoured in 2017 as sports turf manager of the year for the Northwest Baseball League, charged with looking after the grounds at Nat Bailey Stadium for the Vancouver Canadians professional baseball team.

He has earned significant praise for his leadership and management of the team’s new field construction project. Baron was an outstanding student whose internship was with Major League Baseball’s Washington Nationals of the National League.

Baron began his position at Nat Bailey Stadium in February of 2017 following three years as field manager with the City of Kelowna. His arrival in Vancouver coincided with a major renovation project at the stadium in which improved drainage and a more even playing surface topped the list of upgrades. He brought in 600 tons of sand, tore out the infield and foul territories, and created channels to more adequately filter water from the outfield.

While most of his fellow university graduates chose a career in golf, Baron was determined to focus on sports turf from the outset.