Barrie, Ont.’s Joe Breedon says the weather is his ‘boss’ and presents the greatest challenges 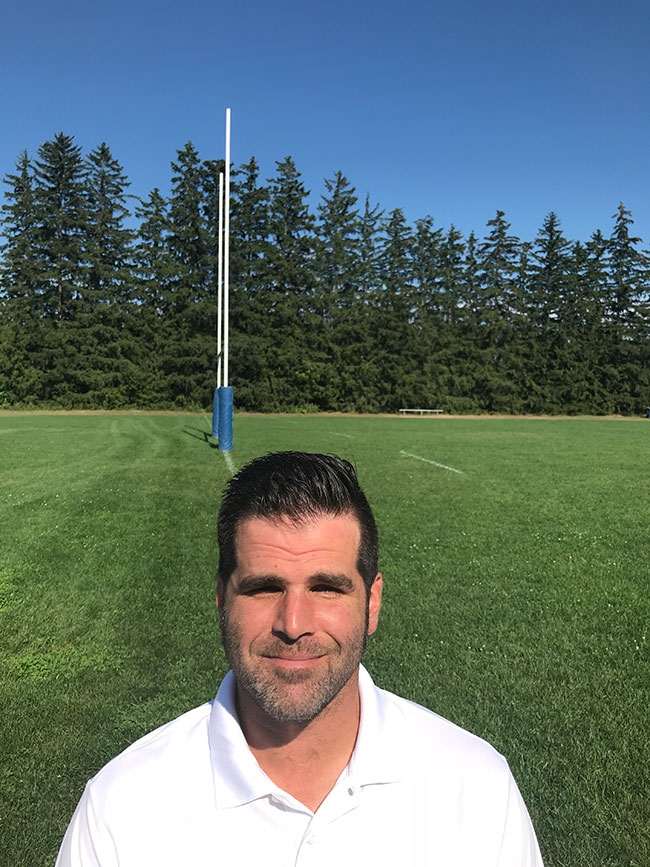 Canada’s sports turf manager of the year was caught off guard upon learning he was chosen for the 2018 honour by Sports Turf Canada (STC).

While attending April’s annual general meeting of the association in Hamilton, Ont., Joe Breedon, outdoor recreation facility coordinator for the City of Barrie, was introduced to a couple of western Canadian members of STC by outgoing president Tab Buckner. Unbeknownst to Buckner, Breedon hadn’t yet been informed of the news and was introduced as the new sports turf manager of the year.

“I must have had a surprised look on my face, and Tab realized it was the first time I had heard about this,” Breedon said. “He said, ‘You didn’t know? They didn’t tell you?’”

Breedon decided to “play along” when he was formally announced as sports turf manager of the year at the appropriate time during the meeting, yet added he was surprised at having been selected for the honour.

“I was pretty shocked with a bit of butterflies. I wondered, ‘Why me?’ There are hundreds of me out there.”

Breedon joined the City of Barrie in 2005 as an assistant with the municipality’s recreation services department and was promoted to lead hand in 2008. One of his primary responsibilities upon his advancement was to take charge of operations for the Barrie Sports Complex in nearby Minesing, Ont. Prior to being hired by the city, he was employed directly by the then privately-owned sports complex, starting his career there in 2000. When the city acquired the complex, Breedon was brought on board as a new city employee.

Although his background was in recreation and leisure services, the 37-year-old took it upon himself to better educate himself once joining the city staff. While working full-time, he took the “back way” into his career through various online courses offered by the University of Guelph, Ohio State University, Sports Turf Canada and the Ontario Recreation Facilities Association.

Leading a staff of 17 employees, Breedon is responsible for the upkeep of the fields within the sports complex as well as another 90 fields elsewhere in the city. The fields within the 118-acre complex include eight baseball diamonds arranged in two sets of “pinwheels,” a larger skinned infield diamond designed for championship level slo-pitch, and a 1,600-seat stadium that is home to the Intercounty Baseball League’s Barrie Baycats. Additionally, the complex includes six multi-purpose fields used for soccer, lacrosse, football and rugby. One of those fields is geared more towards the city’s football team, complete with gooseneck uprights, a scoreboard and bleachers to accommodate 500 people. Another field is dedicated to the Barrie Rugby Club. The unlit pitch measures 70 metres by 100 metres and was built on a 50-50 basis between the city and the rugby club. Rounding out the complex’s facilities are four regulation size beach volleyball courts, three amenity buildings equipped with washrooms and change rooms and a pavilion backing onto one of the pinwheels that is licensed and serves as a headquarters during baseball tournaments.

“Every single week throughout the summer up to the end of September, there is always something going on – some sort of tournament on weekends and regular night play Monday to Thursday. All the fields are basically taken up each evening with the local groups and youth sports.”

When the complex was privately owned, staff looked after all of the field setup for the various sports events, including field lining. The municipality decided to continue the practice once the complex became city owned.

“Being a private business, the groups depend on you to provide the services,” Breedon said. “When the city took over, we adapted that model. The idea is for people to come and play and then leave and not worry about the setup.”

User groups generally don’t know how to properly line fields or look after other setup responsibilities, he said, so they appreciate having that done for them. A small fee for the service is incorporated into the cost of booking a diamond or field.

Painting a football field can take upwards of five or six hours, depending on the number of staff involved. Considerations include timing, the rate of turf growth and the weather.

“It brings a lot of challenges because the weather is our boss. You have to be prepared and organized. There is a lot of trust in the staff, and training is a big thing, too, because one needs to know a bit of everything just to understand the operation.”

Outside of the complex, the individual user groups are responsible for field setup, including field lining and setting up bases. Breedon said he and his staff, however, are prepared to dispense any necessary advice.

About half of Breedon’s time is devoted to the needs of the complex while the other half is earmarked for the city’s other fields that include category C fields and diamonds as well as school diamonds and non-irrigated park fields.

Staffing
None of his 17 staff members is dedicated to any specific set of fields. Each has a hand with everything.

“I try to keep it interesting. I have a great staff. They love coming to work. They hang out outside of work on their own time.”

Because fields are open for play nightly until 11:30 and on weekends, shift work is assigned to the staff. Scheduling of
employees can be challenging when vacations are involved or during family emergencies or other uncontrollable circumstances.

“Ninety per cent of the time you always go to Plan B with everything in this industry.”

The weather, however, is usually the biggest challenge.

“Each year is always different, depending on the winter.”

Winter’s freeze-thaw cycles and extended ice cover will play a hand in field conditions. Breedon said he tries to keep up with soil sampling and water testing.

“We have some pretty high bicarbs coming through and tying up the soil on all the fields (at the complex). It’s a struggle and a slow process to get turf recovery and for the turf to take off, especially in the springtime.”

Each field must be treated as if it’s “your own baby,” and different issues will arise on different fields or different parts of the same field, often depending on where the sun is shining. Some fields have trees that cast shade on one side of a field for much of the day while the other half is largely in full sun.

“Your best friends are the soil and water samples you’re taking.”

Breedon said it’s an expense to continually take samples, but it’s one that pays for itself. He said it’s dangerous to surmise the turf is ideal based on how it looks. It may appear green and healthy, but if it fails a tug test there are problems and it’s important to know what is happening beneath the surface.

Networking with his peers in the industry is important to Breedon as well as giving back to the industry and helping out when he can. He said attending Sports Turf Canada events and the annual conference of the Sports Turf Managers Association in the United States are key opportunities to remain abreast of what is happening within the industry.

When it comes to hiring staff, he said experience and schooling are important, “but I don’t look for anything but character and the character that fits into our model.”

Staff can be trained to do the job, but having people who get along with one another and who bond as a team to produce good morale is perhaps more important, he said.

“Attitude is number one in my book.”