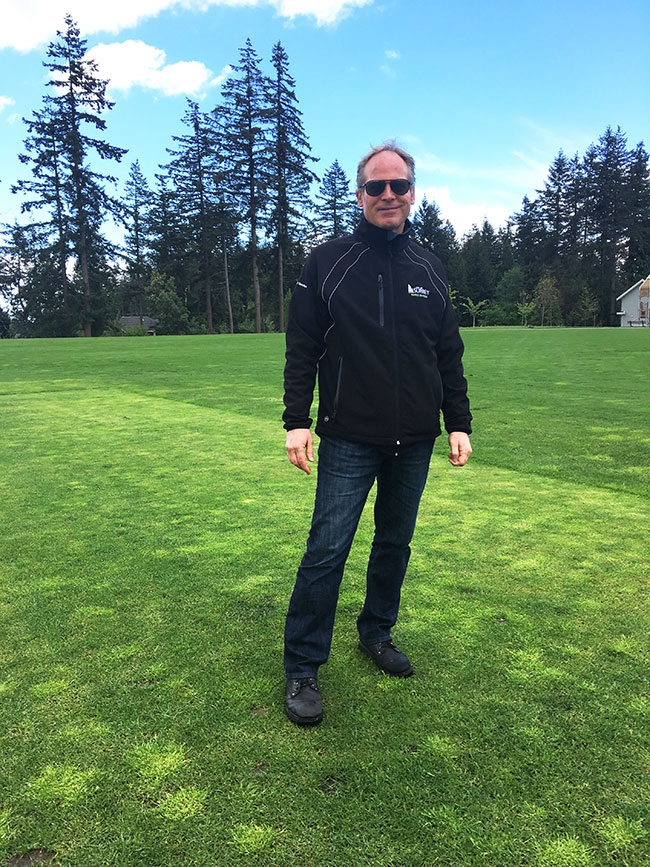 Hugh Norris is marking his 30th anniversary this year with Surrey’s parks, recreation and culture department.

A British Columbia man has become Canada’s first sports turf manager of the year from outside of Ontario. Hugh Norris, park facility operations manager for the City of Surrey, was selected for the honour in April by Sports Turf Canada.

“To say the least, I’m surprised,” he said. “It’s surprising, exciting and interesting, all at the same time.”

Canada’s first sports turf manager of the year was selected in 2014. The previous three recipients of the title are from the Toronto and Oakville areas.

Norris said he wasn’t even aware he was in the running for the honour, nor has he learned why he was considered.

Norris said he was originally hired as a labourer in 1987 before moving up to groundskeeper and park operations co-ordinator. He was promoted to his current position nine years ago.

His selection as sports turf manager of the year came after what might have been his most challenging year on the job. British Columbia’s Lower Mainland experienced an untypically harsh winter in 2016-17 with significantly more snow than normal, more days with temperatures below freezing and one of the wettest winters on record.

The unprecedented weather resulted in field shutdowns in December and January, inconveniencing several user groups who typically play soccer throughout the winter months when temperatures are usually comfortably above freezing.

“We get winter every year out here, but it typically lasts one week, two weeks or three weeks, and the groups use that as a hiatus during the season. When this turned into two months plus, that was very difficult for us.”

He described the season as “a normal Canadian winter” – it was anything but for Lower Mainlanders accustomed to milder conditions – which played havoc with the municipality’s winter schedule.

Norris is responsible for about 100 baseball diamonds, 70 natural turf fields and 14 synthetic turf fields. He said the extended weather-driven shutdown of his fields last winter was felt particularly with the closure of the artificial fields that normally can be used 365 days of the year.

“We had them shut down for a good part of December and January. That was a lot of lost revenue in addition to the user groups not having any soccer facilities to use.”

Unlike most other parts of Canada, where soccer is played outdoors during the summer months, the comparatively milder winters in British Columbia’s Lower Mainland allows for winter play, even though play on natural fields is limited to 12 to 15 hours per week on mainly weekends and during
daylight hours.

Fields are dormant during this time period yet are still a vibrant green colour.

“They are playable, but they’re delicate.”

Norris admitted that allowing winter play on Surrey’s dormant natural fields presents a challenge because they don’t have the ability to rebound from wear and end up in “tough shape.”

This leads to an enforced shutdown of the fields for a minimum of 60 days spanning April to the first part of June. While they are closed for use, the fields are overseeded and irrigated and provided the time necessary to recover from winter play.

This year’s unusually harsh winter, however, led to some winter kill as well as fungal damage, including fusarium and snow mould. It prompted Norris to double his overseeding program in the spring to return the fields to a healthy state.

Baseball season in the Lower Mainland usually begins April 1, but was delayed this year to prolonged wet field conditions. Once it stopped snowing this winter, the area was hit with unusually heavy rain. Some older baseball fields with inferior drainage capabilities struggled in the early spring and, by the second week of May, there were still three or four diamonds still closed due to excessively wet soil conditions.

Norris said weather experts have warned that more variability in weather extremes can be expected in the years to come.

“If that’s the case, we should be prepared for winters like this in the future. That climate variability is definitely going to be a challenge for us in terms of how we manage our assets and how we want to build our new assets to be more weather resistant. This variability is going to become more of a norm.”

In preparation, Norris said improvements are in store for Surrey’s clay-based fields that had struggled so much during the winter.

Surrey has had a municipally imposed cosmetic pesticide ban in place for close to a decade that presents another challenge to Norris and his staff.

“We’ve had to improve on our cultural practices in terms of overseeding and fertilization and careful watering. As long as we can maintain good density on our sports fields, we don’t see a lot of invasive species.”

Snow mould and other diseases, he said, aren’t as easy to overcome through cultural practices. Under the terms of the municipal pesticide bylaw, pesticides can still be used in extraordinary situations. Norris said if an extreme condition might lead to total degradation of a field, the necessary pest control product can legally be used on a limited basis.

Only a few of Surrey’s fields are lit.

He said his department hasn’t been subjected to shrinking budgets in recent years, and requests have been made for one-time funding if it is deemed certain assets require additional assistance. Funding is always an issue when governments are involved, he said, noting as a manager he is to look at his priorities annually and shift them around to where they are
most needed.

“No doubt we rob Peter to pay Paul in our line of work, and we try to keep our residents as satisfied as possible to the best of our ability.”