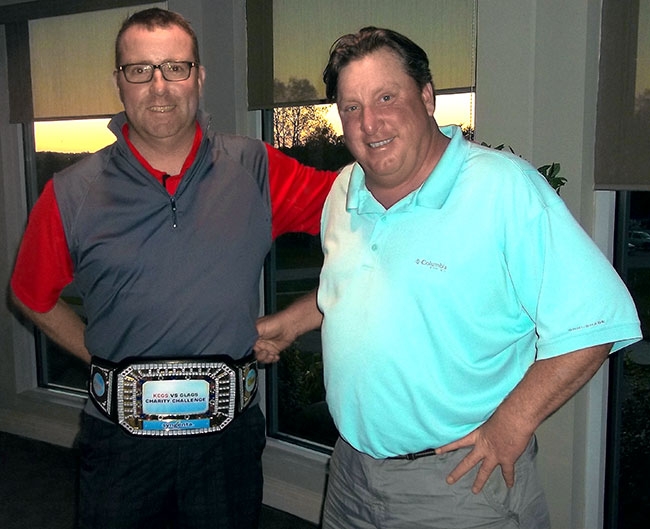 The final 11½ to 9½ victory marked the second consecutive year and the only other time the visiting team has won the friendly match play competition between the neighbouring associations. The event alternates each year between GLAGS and KEGS-based golf courses. The 2016 competition was played at the Essex Golf Club in LaSalle.

Three individual competitions made up each match. One point was at stake for each segment, including best ball (holes 1-6), alternating shots (holes 7-12) and scramble (holes 13-18).

The Syngenta Cup – actually a trophy adorned with an oversized crystal golf ball – was presented to KEGS captain Dan Friesen, superintendent at Orchard View Golf Club, following a post-tournament meal. A professional wrestling-style championship belt is the event’s other prize.

“You guys (GLAGS) have eaten our lunch for a couple of years now,” Friesen said in jest upon being handed the belt by GLAGS captain Jamie Spencer, superintendent at Westminster Trails Golf Club in London.

Friesen added the event “is a fantastic atmosphere” in which not only a fun day of golf was enjoyed by a collective group of 28 golfers, but also a productive post-golf session during which a roomful of golf superintendents discussed a variety of topics.

“The accumulative knowledge in this room is so powerful and, if we use that, there’s not much we can’t overcome. Whether we’re losing chemistries we’re worried about, it’s fantastic to see and hear these men in this room talk about that kind of stuff. That is the biggest thing about all of these events.”

Leading the round table discussion was Syngenta turf specialist Ryan Beauchamp who talked about some new chemical products soon to be introduced to the market. He said the fungicide Daconil is currently “under the gun,” but Syngenta has been conducting trials with a replacement product called Secure that is slated for release in Canada in 2018. Already available in the United States for a few years, it is a broad-spectrum contact fungicide that works “extremely well” in trials and also helps with algae, “doing everything” Daconil did.

“Positive things are coming out of this,” he said.

Concert is another broad-spectrum fungicide proving effective against dollar spot. Because it contains Daconil, it is a guess as to whether it will remain a part of Concert’s composition once Daconil is no longer available, Beauchamp said.

Dan Albright, assistant superintendent at The Oaks, offered a brief history of the golf course, noting it was built in 1993. What makes the course unique, he said, is that its upper reaches resemble a links style layout while its lower elevations make the course more traditional in nature. In 2014, a wholesale bunker redesign was done. A future project, although not yet green-lighted, will involve a redesign of the third and fourth holes. The current range is “kind of wonky” with its drop in elevation, he said. The potential plan is to relocate the range to No. 4’s current location and play it the other way, with that part of the course serving as the new driving range. The fourth hole will go down into the bush and come back up again. The third hole will be a par three where the top of the range is currently located.

“It would suit the golf course nicely.”