News Profiles
GLAGS whips KEGS to get cup, belt back 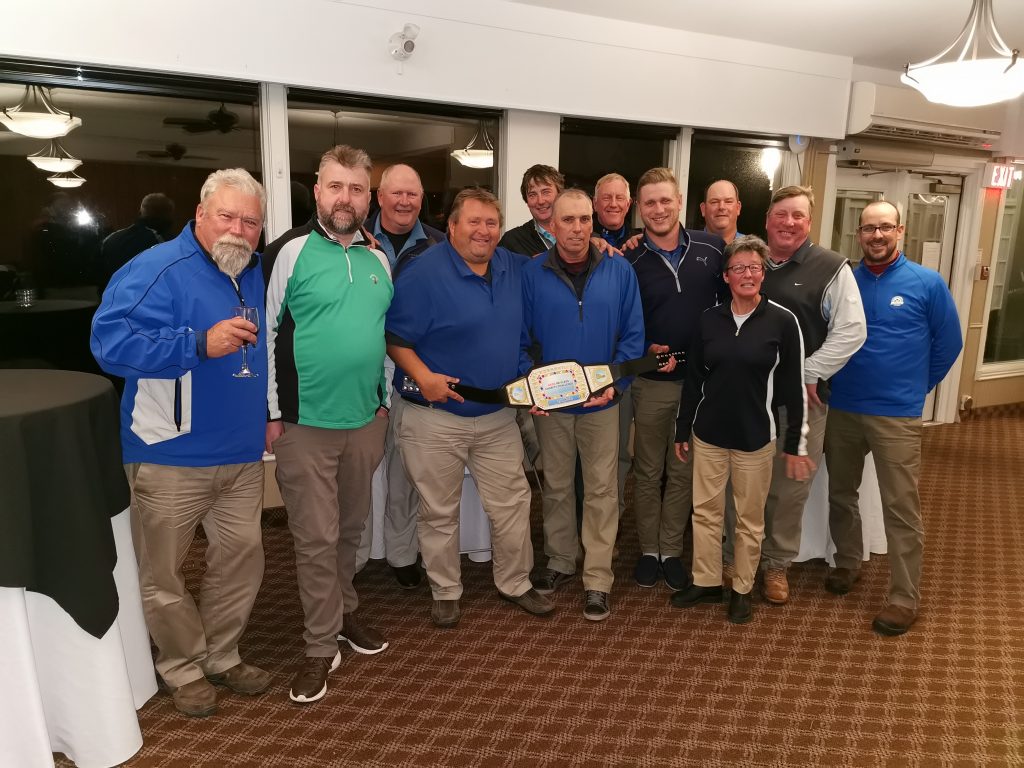 The Greater London Association of Golf Superintendents (GLAGS) has reclaimed the Syngenta Cup after a two-year drought. The annual match play tournament, contested in October at the St. Thomas Golf & Country Club, ended a two-year reign by the Kent-Essex Greenkeepers’ Society (KEGS).

GLAGS’ recaptured the trophy and the accompanying championship belt following the most lopsided victory in the event’s 11-year history, giving the home team association an overall 6-5 edge in wins.

Losing only one of seven matches, GLAGS made the most of the other six to overpower KEGS by a 16-5 score.

“After two years of us holding the belt, it’s time to hand it over to GLAGS,” KEGS captain Gregg Menard, superintendent at Wildwood Golf & RV Resort, lamented.

The seven individual matches pitted twosomes from each association squaring off against the other in a competition for three points (one point apiece for six holes of best ball, six holes of alternating shots and six holes of a scramble). GLAGS swept two of the matches and scored 2½ to one-half wins in three others.

The St. Thomas Golf & Country Club in Union served as the venue for the inaugural Syngenta Cup event in 2009. Participants who hadn’t visited the private club since then or in recent years noticed a dramatic difference in the golf course’s look. In order to improve sunlight penetration and air flow to parts of the course that had been suffering, the club undertook a tree removal project a half-decade ago to address those challenges.

St. Thomas superintendent Wade Beaudoin said that when the club last played host to the Syngenta Cup, the course couldn’t be seen from inside the clubhouse.

“It was completely surrounded by trees. You couldn’t see any of it.”

The improvement in turf quality didn’t go unnoticed by the participating superintendents. Todd Currie, superintendent at London’s West Haven Golf & Country Club, was impressed by the abundance of bentgrass on the course.

“It’s insane how much bentgrass there is,” he said.

Syngenta turf specialist Ryan Beauchamp, who preceded Beaudoin as superintendent at St. Thomas, praised his successor for the work he has done at the golf course.

“He’s done a better job than I ever did and it just gets better and better here,” he said. “It’s a big test of golf. It’s a nice old Stanley Thompson-Robbie Robison work here, and it’s a real treat to play. You don’t see many places like this.”

Other recent improvements to the golf course have included the installation of a new irrigation system three years ago and the lengthening of the course to more than 7,000 yards.

St. Thomas has been the recent host venue for both the Ontario men’s and women’s provincial championships.

Although Beaudoin didn’t play in the event, he volunteered his services in a memorable way, cooking perch and duck for the competing golfers as they passed by designated holes on both the front and back nine. The “appetizers” tided the golfers over until their post-tournament meal and the presentation of the championship belt to Team GLAGS. Additionally, golfers were served coffee with a splash of Bailey’s at both stations to keep themselves warm on a day in which the “feels like” temperature was a mere five degrees Celsius.

While golfers awaited their meal afterwards in the clubhouse, a number of topics were discussed during a roundtable chat. The participating golfers debated the merits of holding the Syngenta Cup event during its traditional mid-October time frame, acknowledging the weather is typically cold and wet during years in which GLAGS is the host association. A proposal was made to stage the tournament earlier in October, but it was noted such a timing shift could interfere with fall aeration scheduling among participating superintendents. It was suggested that if an event date was established well in advance, adjustments could be made accordingly to free up invited competitors.

Beauchamp also talked about the success of two new products Syngenta introduced during the past year and a half: Secure and Posterity. Secure is a multi-site contact fungicide that provides protection against dollar spot and controls 10 additional turf diseases. It also controls dollar spot that is resistant to other chemistries. Posterity fungicide provides up to 28 days of dollar spot control and holds strong under high dollar spot pressure. Additionally, it delivers consistent spring dead spot control and makes an ideal rotation partner for fairy ring control.

The 2020 Syngenta Cup will be played at a yet-to-be-determined golf course in the Windsor-Essex area.