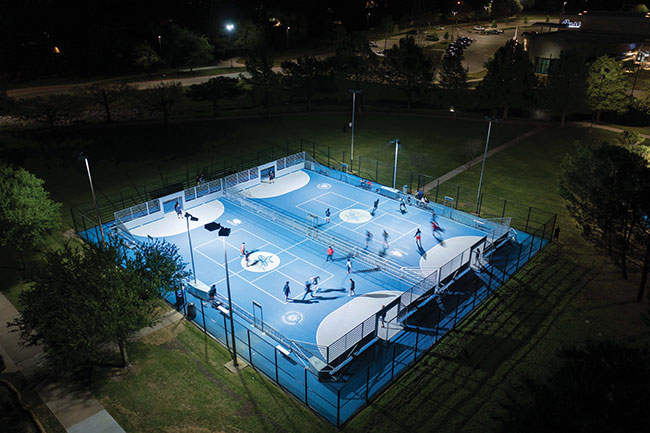 An Iowa-based company has come up with a solution to help municipalities make better use of underutilized urban spaces and provide recreational opportunities for youth of all ages. Musco Lighting, in association with the U.S. Soccer Foundation, conceived in 2018 what it calls a “mini pitch system” – a modular sports field that can be installed atop decaying or little-used tennis and basketball courts or former parking spaces.

One such system has already been installed in British Columbia, and several other Canadian applications are currently in the works.

Jenna Sullivan, inside sales specialist with soccer development for Musco Lighting, said the U.S. Soccer Foundation conceived the idea for the mini pitch soccer fields amid the growing enthusiasm for the 2026 FIFA World Cup, to be played in 16 North American cities, including Edmonton and Toronto.

The soccer foundation wished to have 1,000 mini pitches installed throughout the United States prior to the World Cup and contacted Musco about providing lighting. Other contractors were lined up to provide such additional necessities as fencing, goals and acrylic surfacing, but the soccer association was more of a fundraising organization than a project-based group.

“They came to us, knowing we can do this from start to finish,” Sullivan said.

Three months later, Musco came up with a design, and the first mini pitch was installed in 2018 in Newark, N.J. A few design changes have been made since then, but the basic presentation has remained the same.

The pitches are available in three standard sizes: 40 feet by 84 feet, 50 feet by 102 feet and 60 feet by 120 feet. They are designed to be installed atop underutilized tennis courts that have fallen into disrepair over the years, having succumbed to cracks and weed growth. Because the basic asphalt or concrete surface is already in place, the municipality wishing to have a mini pitch installed needs only to repair the surface and put acrylic down.

“Parks and rec are starting to see the light on this,” Jeremy Maffei, Musco Lighting’s national sales manager for Canada, said.

The big selling point for the mini pitches is that their foundations are already in place and present an opportunity for underused spaces to be reutilized. 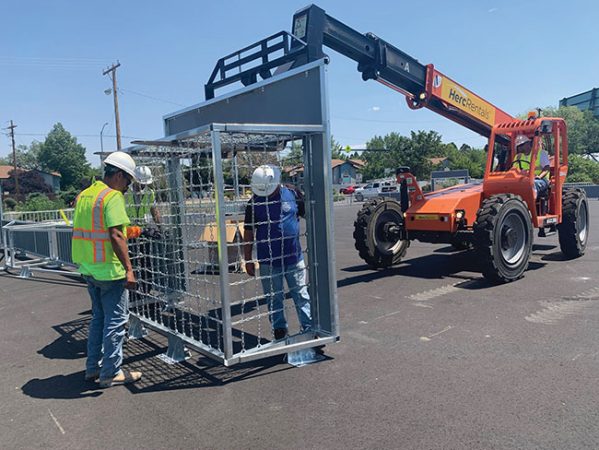 B.C. installation
Canada’s first installation – at a First Nations community on Penelakut Island in British Columbia – was installed in partnership with the Hope and Health initiative, the Vancouver Whitecaps Football Club and Kw’umut Lelum Child and Family Services. The pitch has given Penelakut Tribe youth an opportunity to develop soccer skills and be physically active.

Maffei said five additional projects are already in the making for other locations in the province, and he is working with Edmonton’s parks and recreation department on an installation there. Additionally, he has been working with a post-secondary institution in the Alberta capital for a mini pitch system to be installed in an open area between two buildings that had previously been used for parking.

Early discussions are also underway with potential customers in Ontario.

He said what he’s learned from his discussions in Edmonton is that if other sports can be added to soccer, it enlarges the demographic for a pitch’s use and opens the door for more fundraising opportunities. Basketball, pickleball, tennis and even hockey are among other potential recreational uses.

With one installation already in place in Canada and at least another half-dozen ready to get underway this year, Maffei said he expects the demand to build.

Although acrylic is the preferred – and cheapest – surface, the pitches are designed to accommodate an artificial turf surface if desired. The drawback to a synthetic playing surface, however, is that it may negate accessibility, he said, which can make it more difficult for wheelchairs to move about.

Because of their accessibility, mini pitches are often a cheaper option for municipalities that may also be considering other accessible recreational options that might exceed $1 million in cost. Depending on the size of the mini pitch, costs can range from U.S. $60,000 to $120,000.

Maffei said the only significant upkeep required for the mini pitches, once installed, is to replace the acrylic surface every five years.

The acrylic surfaces are lined to accommodate the sports for which they’re designed. They offer a shiny, painted look, are weather-proof and can be logoed.

The mini pitch system is compact enough to fit on one truck and can be installed in 12 hours with a three-person crew. Materials include square tubing and channel material, sheet metal and anchors for both asphalt and concrete surfaces. Lighting includes two LED luminaires and can be controlled for instant on/off scheduling and remote capabilities when equipped with Control-Link.

For more information about the mini pitch system, including a link to a YouTube video, visit www.musco.com/mini-pitch/