Alternative herbicides: liquid, granular or something in between? 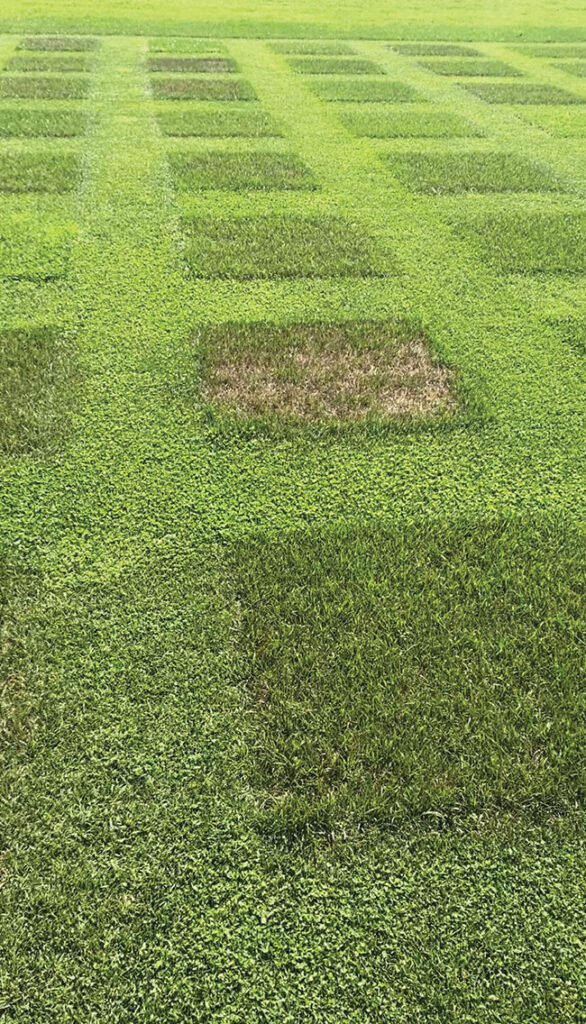 Fiesta trial at the GTI

Low-risk herbicides are commonly used on lawn height turfgrass to manage weeds, especially in regions affected by strict pesticide legislations. When a new product is developed, the manufacturer needs to determine the optimal rate to have the desired effect without over-applying, which can be damaging to the turf and not economical. Additionally, the development team will need to decide on how the product is formulated – is it a solid (also called granular), a liquid, or something else?

Liquid herbicides are fast-acting and generally have a lower salt content. However, they are usually more expensive than solid products. Solid products require a drop-spreader or broadcast-spreader and may have slow-release or delayed-action properties. Water soluble granule (WSG) products are shipped as a solid and are mixed with water by the user to be applied as a liquid. A downside to WSG is the need to keep the mixed product agitated to prevent it from settling out of suspension, but they can be less expensive than liquid products and easier to apply evenly than granular.

Fiesta is an alternative herbicide containing iron chelate that specifically targets broad-leaf weeds, including dandelion, black medic, and plantain. Iron (atomic symbol Fe on the periodic table) is an essential micronutrient for plant development and plays a key role in producing chlorophyll. When bound to a chelating agent, the iron is in a soluble form which can be dissolved in water. Chelated iron has been registered for management of broadleaf weeds.

Plants can be divided into two categories: grasses (monocots) and broadleaf plants (dicots). The leaves of broadleaf plants will have branching veins, whereas grasses have thin leaf blades with parallel veins. On a biochemical level, broadleaf plants are more adept at absorbing chelated iron, and the increased absorption can be used to their detriment. When products containing chelated iron are applied to turf, the iron will be quickly absorbed by broadleaf weeds and internal iron oxidation will cause necrosis and death. The turf will be largely unaffected, and in fact may exhibit a darker colour due to the production of more chlorophyll. 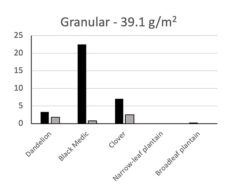 We all know the adage “too much of a good thing,” and that applies in this situation as well. If too much iron is applied, even the turf will suffer, resulting in phytotoxicity (phyto = plant, toxicity = damage). The maximum safe rates of herbicides, especially when they are commercially available, should be determined to understand the potential consequences of misapplication. In a series of experiments at the Guelph Turfgrass Institute (GTI), various rates and formulations of the product Fiesta were tested on turf maintained at lawn and municipal sports field height (5-6 cm). 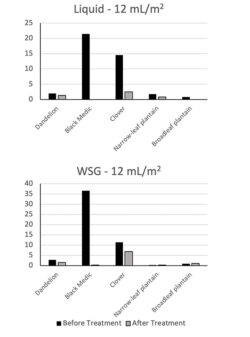 The current label rate for the liquid formulation of Fiesta recommends 4-16 mL product per m2, depending on the target weed. The granular and WSG formulations are not currently on the market.

In the first trial at the GTI, on a field of creeping fescue + perennial ryegrass + Kentucky bluegrass, the study tested the liquid, water soluble granular (WSG), and granular formulations of Fiesta. The liquid treatments were applied at a 12 mL product per m2. Fiesta WSG treatments were mixed at a rate of 12 mL product per m2. The granular plots were pre-wet with water to simulate dew prior to application, and then the pre-measured solid product was sprinkled on by hand (39.1 g per m2). Each formulation was applied twice, 18 days apart. Percent coverage of weed species was counted each week using a point-quadrat, and turf phytotoxicity was visually estimated on a 0-10 scale (0 = no damage, 10 = death of turf stand).

Overall, each formulation of Fiesta worked to suppress dandelion, black medic, and clover (Figure 1). It was difficult to assess the effect on narrow-leaf and broadleaf plantain due to low numbers in the plots.

In general, the liquid and granular products provided the good weed control throughout the experiment and performed comparatively well to another commercially available alternative herbicide (4-chloroindole-3-acetic acid). At the rates tested in this experiment, there was little to no phytotoxicity detected.

All formulations and rates of the iron-based herbicide Fiesta significantly reduced black medic populations present in the plots, virtually eliminating it from all plots by end of study. Clover was also slightly reduced, and there were no other weed populations in the turf stand to evaluate.

The take-home messages from these trials are:

Dr. Sara Stricker is communications and outreach co-ordinator at the Guelph Turfgrass Institute.