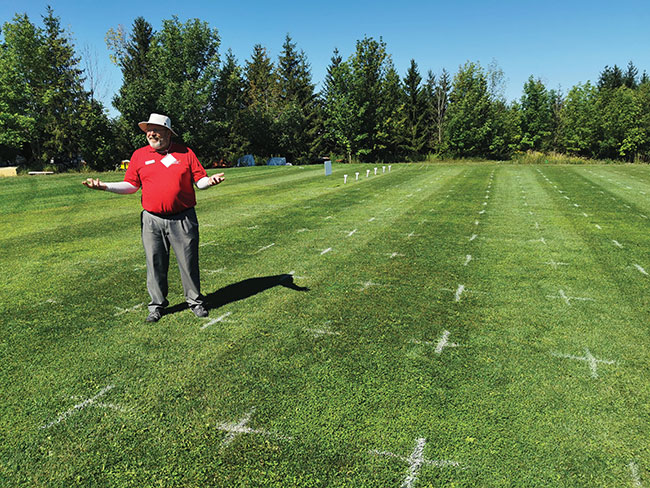 The loosening of COVID restrictions in recent months has allowed officials at the Guelph Turfgrass Institute to welcome visitors to its new facility and research plots. The official opening of the GTI was held in mid-September with a ribbon-cutting ceremony but, about a month prior to that, members of the public gathered for an in-person tour of the facilities during the Green Municipalities Field Day.

Dr. Eric Lyons, director of the GTI, shared information about overseeding research being conducted on a plot designed to emulate a sports field or park. The goal of the study is to look at different varieties other than perennial ryegrass, which tends to be the “go to” choice for overseeding of sports fields because of its quick germination.

If there’s a “sweet spot” of traffic, Kentucky bluegrass will dominate, however, if there’s insufficient traffic, perennial ryegrass will take over.

Using a “wear machine” to mimic the amount of wear a sports field would normally undergo, conclusions are being made on plots with weed control and those without.

“We had to beat up the turf to create some gaps in the turf.”

Lyons said it’s a “statistical nightmare” but, in consultation with authorities, he said he believes the study’s directive will turn out OK.

“You just have to treat each one as its own trial. We will analyze things separately.”

The study received the necessary funding only this year, Lyons said.

The original seed mix for the plots contained both Kentucky bluegrass and perennial ryegrass. Populations of weeds and grass are being measured, and the specific species of weeds and turf are being documented for a bluegrass-ryegrass comparison.

Perennial ryegrass has been popular in overseeding because of its ability to quickly germinate. Lyons said new varieties of Kentucky bluegrass are quicker to germinate than traditional varieties and may work well.

“My hypothesis is that unless they form rhizomes quick, it won’t matter,” he said, adding that although that’s his theory, he’d be happy to disprove it.

If it’s discovered that quick-germinating bluegrasses are sufficiently wear tolerant at the seedling stage to get to the rhizomes stage, Lyons said he’d be pleased to pass the information along to turf managers.

“We don’t see a lot of clover on sports fields because they get adequate nutrition. It’s a legume and will fix nitrogen.”

The research field at the GTI is low in nitrogen because Lyons said he enjoys doing fertility work.

“Everything out here is pretty low in nitrogen, so we tend to get a little more clover.”

Much more clover is found in unfertilized plots versus those that are fertilized.

“I kill the clover in my front yard by never watering. Clover dies during an extended drought. It stays greener longer, but then it dies. Clover always fails.” 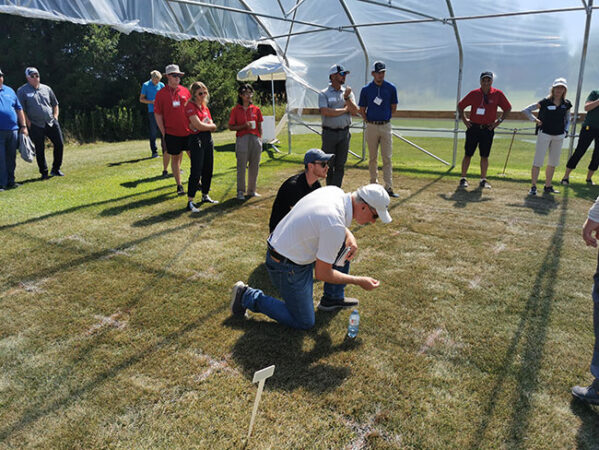 Visitors to the GTI’s Green Municipalities Field Day take a closer look at the turf being studied at one of the trial plots.
Photo credit: Mike Jiggens

TWCA tall fescue drought evaluation
A single-species trial, it includes three replications of 44 entries and six standards. Trials are named for the year in which they were established with data collection not beginning until the following year. Data is being collected through digital image analysis technology over three years.

TWCA conducts trials in rainout shelters and in field conditions:

The three-year trial is replicated in 10 locations.

TWCA Kentucky bluegrass drought evaluation
The single-species trial includes three replications of 24 entries and six standards. Trials are named for the year in which they were established with data collection not beginning until the following year. Data is being collected through digital image analysis technology.

TWCA conducts trials in rainout shelters and in field conditions:

The two-year trial is replicated 10 times in nine locations.

Fiesta trial
The trial is a comparison of two formulations of Fiesta – a low-risk herbicide – for the control of broadleaf weed populations on lawn-height turfgrass. Dandelions will be seeded into an established turf stand to evaluate the early emergent suppression of the weed.

Turf canopy scanner
3D laser scanning, or light detection and ranging (LiDAR) is a new technology in which laser beams create a three-dimensional topographic map of a surface. The University of Guelph-developed scanner uses LiDAR sensors mounted on a rover to scan the turf while driven. The research is being conducted by engineering graduate student Arthur Rosenfield by using machine learning to predict rates of growth, fill-in and harvestability of sod.

Related
Options abound for overseeding of sports fields
Poa supina worth looking at as overseeding option on sports fields
Overseeding is critical in sports turf field coverage
It may be expensive, but supina bluegrass can help maintain turf coverage in high traffic