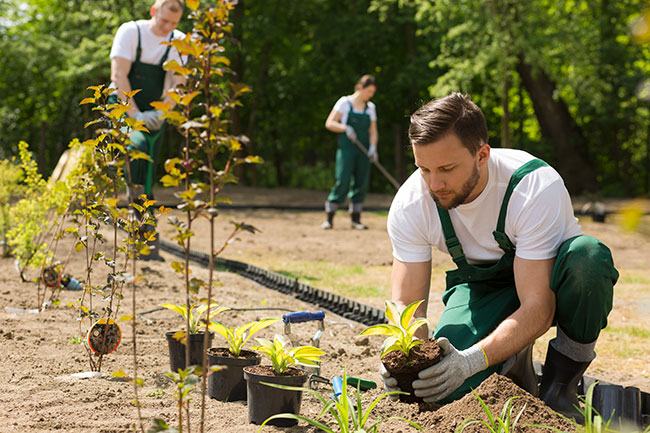 Recruiting reliable, enthusiastic and hard-working employees in the landscaping industry is often a formidable challenge among contractors. When the right workers come along, a contractor’s next challenge is to keep them on board in hopes of maintaining consistency from one year to the next.

That’s often easier said than done, and many contractors find their businesses become a revolving door with each passing year. It doesn’t have to be that way, however, as a panel of landscape and horticulture business owners noted in January at the virtually delivered Landscape Congress conference.

There are several effective hiring strategies available to enable contractors to find the best possible new recruits, they said, and there are an equal number of arrangements that can be implemented to keep those skilled, engaged and hard-working individuals from moving on after only a season or two.

Lindsay Drake Nightingale
Yorkshire Garden Services is marking its 20th year in business this year, coinciding with the International Year of the Garden.

Drake Nightingale said there was once a time when a business could place a small help-wanted advertisement in the local newspaper and then be inundated with resumes. As times have changed over the years, the rise of social media has changed the way companies conduct business.

“Sometimes, recruitment is super easy,” she said. “Sometimes – and more often – it’s very challenging. It still all comes down to networking. That’s the crucial element. It’s that face-to-face contact.”

Drake Nightingale is a proponent of networking through programs aimed at recruitment. One she advocates is the GROW (Get Ready for Opportunities at Work) program. It features three different components: new entrant worker, supervisory development and enhancement, and employer’s choice. It’s the former she relies on most.

GROW’s new entrant component is an intense, four-week “boot camp” for new workers, who are taught basic technical skills and the means to recognize basic plant material. When interviewing new workers in the program, she finds they have a certain “spark” and an enthusiasm to become involved in horticulture.

Humber College’s horticulture technician program is another good recruitment resource, she said, but the job of recruiting is tasked to key staff who have developed a rapport with those completing its programs.

“It’s important to utilize your staff so that they can build that rapport with younger workers so that they can go into the environment they’re most familiar with and can talk about what our company is all about.”

Yorkshire Garden Services’ company purpose is that it’s “passionate about gardens,” which is an important component of the recruitment process.

“If we detect this passion about gardens in these employees, we can nurture it and develop it, and continue with their training and love, and build up upon what they initially know and how we can encourage that love to continue and make it a strong career.”

To help with retention, Yorkshire Garden Services offers its workers several incentives, including continuous training through Landscape Ontario and other outlets. Additionally, employees earn a living wage so that they can adequately meet their rent or mortgage payments.

Because of the company’s location north of Toronto, the need for licensed drivers is critical to the business. Possession of a valid driver’s licence is a huge, but the company offers advanced driver training as an incentive for younger people to become licensed. The programs are seen as a step up from traditional young driver training programs.

Workers are trained so they have transferrable skills.

Christine Moffit
Christine’s Touch Gardening Ltd. has been in operation for 22 years. Moffit got her start in horticulture at the age of 13, mowing at a local golf course, but had worked a variety of jobs during her formative years in both paying and non-paying capacities. The experience helped shape her work ethic and the core values she has today, she said.

“Working in so many different jobs gave me the experience of what it felt like under different management styles and work environments, both of which have significant impacts on recruitment and retention.”

Moffit confessed she used to struggle with recruitment and retention, adding she felt she needed to customize some ideas to fit her retention goal.

“It’s important to figure out what yours is and what is a realistic length of stay in your organization from your employees while staying true to your values.”

A living wage in Toronto is barely enough for someone to support a family, she said, which makes it challenging to retain staff when work can’t be offered year-round. The physical demands of the job also present a challenge to keep employees.

Christine’s Touch typically employs 16 to 20 people who work from mid-March to mid-December. The company is often a “steppingstone” for many of her employees who move on to pursue other opportunities.

“We focus on training them up as quickly as possible for the duration they choose to be on our team,” Moffit said, adding she supports those who decide to move on when they feel the time is right. “Knowing this helps us successfully recruit those who are good fits for our organization and who have a mutual understanding.”

Employees average two to three years with Christine’s Touch with some leaving sooner and others remaining longer. Some seasons will see a high percentage of team members in their third, fourth or fifth years while only one or two workers will be in their first or second seasons. In such years, a high-performing dynamic will be realized with employees at the peak of their training. However, there are some seasons where the cycle is in reverse.

Moffit said it’s all about setting expectations with each season’s team leaders who will know what to expect from their teams, their capabilities, and where training and support are needed.

New recruits go through an orientation checklist on their first day of work. Guiding principles, roles and responsibilities, and equipment reviews are among the areas covered.

An effective retention strategy she has adopted the past several years is to have employment insurance premiums topped up for those who are laid off during the winter. This is aimed at encouraging employees to pursue continuing education opportunities without them having to worry about paying their bills while not actively working. 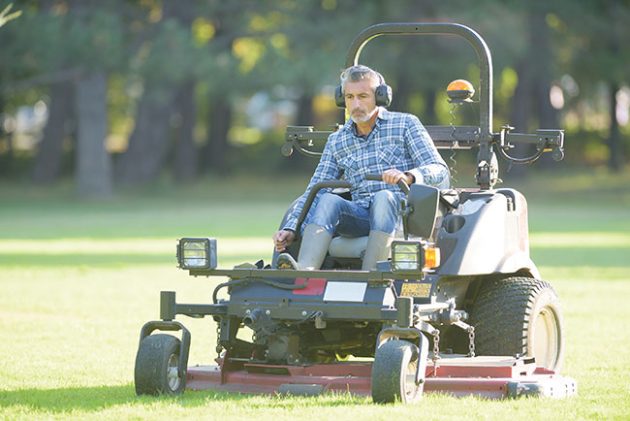 The key to retaining good employees is to create a culture for which they will want to take ownåçership and be a part of the company’s growth and success. Photo credit: auremar/Adobe Stock

Kathy Thomas
Green Thumb Landscaping was founded in 1971 in Burlington by Thomas’ late husband, John. Following his untimely passing in 1993, she assumed the day-to-day responsibilities of running the business, but has since placed the company in new hands. She began her first steps toward retirement in late 2020 but hasn’t completely let go.

The key to retaining good employees, she said, is to create a culture for which they’ll want to take ownership and become part of the company’s growth and success.

“As the leader, your job is to keep your employees engaged, learning and contributing to your company,” Thomas said, adding there are effective ways to help employees achieve success and experience growth. Employees also need to be supported and “picked up” when customers “dump” on them.

Regular half-hour training sessions provided each week to employees allowed them to interact with the company’s management team. The sessions also saw the employees cleaning their own trucks, sharpening their own blades and tending to their equipment.

“This helped bond the employee to his equipment and to the partner(s) on their team.”

Thomas said the sessions proved to be effective and helped the company develop a good reputation for itself.

“You get a good reputation because your employees know what your culture is, they know what you stand for, they know how to be ambassadors, and they have that ownership. They are actually part of the solution.”

Landscaping companies that say they have no time for such practices really can’t afford not to, she said.

“For me, it was a real payoff because it took me to the part where I needed to sell my company at some point, and the people who bought my company are like-minded, and they wanted to buy a company that has that reputation.”

Bringing joy and recognition to deserving employees goes a long way toward retaining them, Thomas said. Erecting a “wall of fame” in the office and sharing employee accomplishments with others during staff meetings are ways to recognize their accomplishments.

“People will want to be with a company where they’re recognized.”

One of the things that helped Thomas with her leadership skills and assisted her in developing a positive company culture was a 10-week human resources course she took 40 years ago at Sheridan College. She said it taught her how to assess different personalities, develop a leadership style, and understand if someone was ready to move into a leadership role and move forward.

Scott Wentworth
Finding the right people to work in the landscaping industry is a universal problem, Wentworth said, adding contractors should always be looking for opportunities and the chance to tell their company story, their culture and the meaningful work they do.

Wentworth Landscapes has found good people from outside the landscaping industry. He said when recruiting new employees, he likes to consider those who enjoy such pastimes as hiking, fishing and rock climbing.

“These are people who obviously enjoy time being outside which is such a big part of our teams.”

Developing and building a team culture that entices employees to become part of it is a vital component of employee retention, Wentworth said, adding employees strive for balanced results in client experience, seek a legendary team experience, desire excellence in financial results, and want processes and systems that support these areas.

“We want to provide a team experience for those in our company that they want to talk to others about.”

The landscaping industry was once looked upon as a “secondary trade,” Wentworth said, noting its employees were perceived as “grunt” workers. This perception, however, failed to recognize the meaningful impact the profession has on its customers’ lives and the communities in which they live. In today’s era of climate change and heightened environmental stewardship, the industry’s projection to the public is even more important.

“We’re not just laying bricks, we’re not just putting plants in the ground, we’re not just mowing lawns and weeding beds – we’re creating venues for families to build memories and connect with nature and to live healthier lives outside.”

It’s important for contractors to tell those stories to their employees and to allow the message to sink in, he said.

Contractors want people to be part of a team that appreciates knowing it can accomplish more as a whole than any one individual can achieve on his own.

The cost of training is “priceless,” Wentworth said, adding to be able to grow and develop employees’ confidence and skills “has priceless returns to your bottom line, to your culture and to grow your people.

One of the keys to retaining key staff is through compensation, Wentworth said, noting employees should know today what their compensation is going to be for the next season.

“We don’t want them speaking to other people and considering other trades. We need to provide a living wage and beyond, but we need to have that communication now.”

Employees at Wentworth Landscapes were told in February what they could expect for the coming season.