Features Golf
Grounds upkeep at ‘the home of golf’

The Old Course at St. Andrews is believed to be the world’s oldest golf course and will be home to the Open Championship in 2022 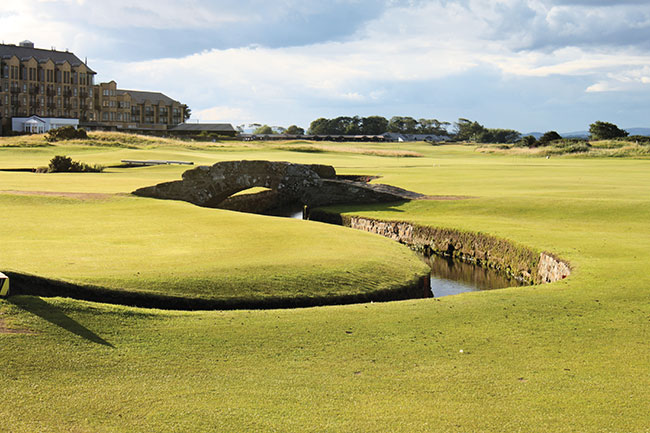 The Old Course at St. Andrews in Scotland is the world’s most storied golf course. Golf has been played at the links-style course since the 15th century, making it what is believed to be the oldest course in the world.

In 2022, “The Home of Golf” will be the site of the 150th playing of the Open Championship – often referred to as the British Open. Because it is a public golf course, avid golfers place the chance to play the Old Course on their bucket list. A similar bucket list exists for North American superintendents, assistants and graduating turfgrass students who have envisioned volunteering or interning there.

Gordon McKie, course manager since 2007 at the Old Course, spoke virtually in January to members of the University of Guelph’s Turf Club about his approach to course conditioning, saying it’s the club’s philosophy to adhere to the methods originally laid out by Old Tom Morris.

“We’ve tried to maintain a lot of the things that he had done, and one is the management of the finer grasses,” he said. “We try to maintain as many fine grasses as we possibly can.”

Morris, a four-time winner of the Open Championship as a golfer, is regarded as the father of modern greenkeeping, having introduced the practice of sand topdressing on greens among other attributes while serving as superintendent at St. Andrews.

This year marks the 200th birthday of Morris, who played a key role in the Old Course’s reduction to 18 holes from 22. Morris found that applying sand naturally encouraged finer grasses.

“That’s something we tend to do quite a bit.”

In addition to greens, tees and surrounds being topdressed frequently, the program has included fairways the past 40 to 50 years.

Topdressing is done lightly yet frequently with a “dusting” every week or two of four to five tons of sand per hectare per application. The goal is to use about 300 tons of sand each year on greens, surrounds and tees and 200 tons on fairways in two applications.

“It certainly does make a difference,” McKie said.

Topdressing is one of the five keys toward achieving healthy turf, he said, noting mowing, aeration, irrigation and nutrition are the others.

“We expected it to be a lot less than that,” McKie said, adding the pandemic led to more golfers from the U.K. playing the course, including many who had never before played the game. “They saw golf as a way to get physical exercise.”

Among the ways the club helps to reduce the amount of traffic on the course is to prohibit the use of “push trolleys” before noon.

A feature that sets the Old Course apart from most other golf courses is the size of its putting greens, including seven double greens. The hole numbers that make up the double greens add up to 18, such as holes five and 13 and holes eight and 10. The holes five/13 green is 37,846 square feet while the holes eight/10 green measures 36,063 square feet. The smallest green at the Old Course belongs to the fabled 17th Road Hole, measuring 7,078 square feet or 657 square metres. By contrast, the average green size in the U.K. is 500 square metres. No. 18 is the Old Course’s largest single green at 15,570 square feet.

“They’re quite large areas to manage and maintain on a daily basis.”

The first and 18th holes form a double fairway that is 129 yards wide at Grannie Clark’s Wynd and is 7.2 acres in size. 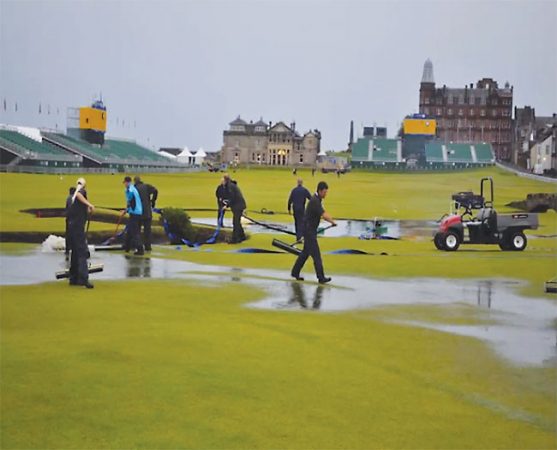 Bumping up fertility
When McKie took over at the Old Course 14 years ago, inputs were low and surfaces were bumpy when dry while high-traffic areas were losing grass cover. Fertility was consequently ramped up to achieve a stronger, healthier sward, overseeding was increased, and wetting agents were added to the regimen.

“We got there by going with quite an aggressive granular feed and strength, but also going with an autumn feed to try and get it strong and healthy and get into the winter.”

McKie said a slow-release product was used in the spring which released over a period of six to eight weeks. It presented challenges in reaching a desired green speed, but produced a healthier sward.

Since 2017, he’s dialed back his fertility rate to reach a good compromise. In 2016, he began applying phosphate in the fall to help suppress winter diseases.

“The main thing is we have good surfaces now.”

Eighteen months ago, the course switched over to a total links irrigation system, but McKie said he prefers hand-watering and regards the irrigation system as an “insurance policy” when needed.

Greens are overseeded twice yearly with pure fescue – half slender creeping red fescue and half chewings fescue – in the spring and fall, and receive a browntop bent seeding in between.

Disk and dimple seeding are the preferred methods.

“We’re certainly doing a lot more overseeding than we have done in the past, but it’s crucial for us to keep grass on the surface given the volume of play we have.”

Greens are aerated twice a year, and fairways, tees and surrounds will also get attention.

Selective herbicides are used on tees, fairways and semi-rough areas to control weeds. If only small patches are found on greens, they will be hand-weeded.

When fescue swards in semi-rough areas begin to thin, ryegrass naturally sets in, making its control difficult. McKie said such matters are dealt with culturally, with chemical treatments used when necessary.

The Old Course’s location along Scotland’s eastern seaboard subjects it to wind speeds of 25 to 30 miles per hour for several days on end. The wind-blown open areas add to the challenge of bunker maintenance.

“It’s a massive job to try to keep things under control.”

Bunkers periodically need to be watered down in such conditions to control the volume of sand being blown about.

McKie said the club is already looking ahead toward preparations for the 2022 Open Championship. For regular play at the Old Course, green speeds are generally between nine and 9.5 feet. For the tournament, however, speeds will be quickened to 10 to 10.5 feet. He said it doesn’t require much work to adjust from one speed to another. Double cutting with a morning and evening cut gets green speeds to tournament standards, achieving smoothness, trueness and consistency across all surfaces.

By paying special attention to the moisture levels in greens and their amount of organic matter, the aim is to achieve a firmness that allows the ball to impact, release, check and roll.

“We want that firmness that rewards a good shot.”

McKie said attendance for the 2022 Open Championship is expected to be around 250,000 for the four days of competition.

The St. Andrews Links Trust is the organization responsible for the administration and maintenance of the golf course.