Preventive maintenance is best, but ponds can still be cleaned up and back on track mid-season 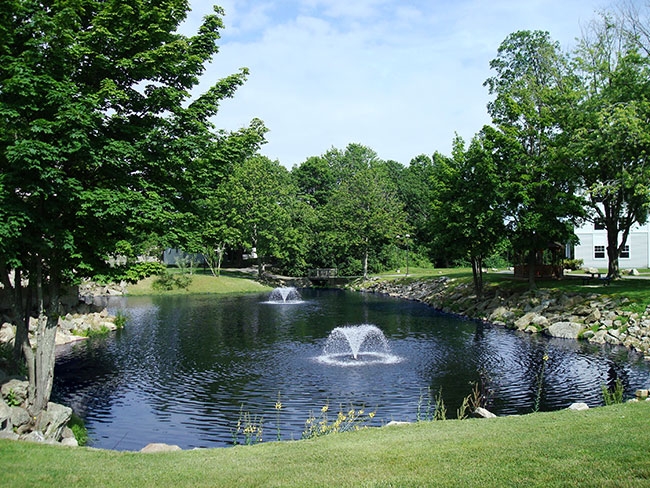 Water fountains are not only aesthetically pleasing, they help aerate the water in ponds.

After a spring of beautiful weather we have all been busy taking care of customers and keeping the business up and running. Sometimes that means we get so busy that we get behind on some jobs that we know would make life easier down the road but don’t ever seem urgent enough to make it to the top of the to do list.

One of those things for many golf courses is preventative maintenance for your lakes and ponds. So, if you’re like so many others and have not had time to add pond dye or beneficial bacteria before the weeds and algae get out of hand, what can you do to manage the problem now and get the pond back to looking its best?

The first step would be to assess the problem. Problems can range from excessive plant growth, to cloudy water, to algae outbreaks. I would like to note here that some plant and algae growth in a pond is normal and very healthy, but like all things there is a tipping point. If, however, you do have lower amounts of plants and algae these will help to prevent drastic algae blooms in a pond that can lead to very low oxygen levels by using up nutrients.

Some emergent (above water) plants, such as cattails, are particularly useful in this aspect as they absorb huge amounts of nutrients and are very easy to control. String algae on waterfalls and rocks is also a useful means to use up nutrients, and it grows at a relatively controlled rate. String algae also works as a natural filter to help clarify water and stabilize the bottom.

When you cross the tipping point into excessive plant growth, the main source of the problem is excessive sludge and compost on the bottom of the pond. This essentially works as fertilizer to create growth. The fastest way to take care of excessive growth in the heat of the season is to manually remove the weeds with either a cutter or rake. Cutters have an advantage of removing large amounts of weeds quickly with lower physical exertion than raking them. A cutter essentially cuts the plant off at the bottom of the pond and resets the growth. Once detached, the growth will float and can be easily gathered at the shoreline and removed.

If you are going to cut weeds it is essential to remove the growth from the pond so that it does not sink to the bottom and fuel more growth or an algae bloom. Once you have removed the growth, you have the chance to start preventative maintenance with pond dye and beneficial bacteria to help prevent it from re-occurring.

Cloudy and muddy water
If the problem is cloudy or muddy looking water, this can be caused by a variety of reasons. Cloudy water is usually suspended clay/soil particles or suspended algae. In our minds these seem simple to tell apart, but in reality algae is not only green but can also appear brown, yellow, light green or even red, so just because it is not green doesn’t mean that it’s not algae. The simplest place to start is by doing a settling test. Take a small sample of water in a jar or bucket and let it sit undisturbed for 24 hours. If the water clears over this time, the problem is being caused by suspended particles. If they settle out readily in the bucket test, the question you need to ask is why are they staying suspended in the pond.

Suspended particles can be caused by a large rain event that stirs the pond, a flooding event where dirt is washed into the pond from its surroundings, bottom-feeding fish digging and stirring up mud and many other sources. For large rain events and other occasional sources of problems, the pond will likely clear after a few days and no action is required. If the problem is more sustained, then it might be worthwhile to find the source of the problem to solve it.

If the water from the bucket test does not clear up, the problem is generally being caused by suspended (planktonic) algae. This type of algae exists either as single cells or small colonies that are suspended in the water near the surface to allow them access to large amounts of light. Suspended algae can be addressed through the use of beneficial bacteria to reduce nutrient loads in the water, which these algae require to thrive.

Water fountains are not only aesthetically pleasing, they help aerate the water in ponds.

Alternatively, pond specific algaecides (not chlorine based) can be applied for faster results but should be followed up with a beneficial bacteria to prevent the problem from re-occurring and break the cycle of algae die-off and nutrients being released from the dead algae, causing a new crop of algae growth.

We have touched on suspended algae blooms, but what if you have clumps of string algae floating on the surface or covering rocks and the bottom of a pond? These algae operate very similarly to planktonic algae in that they require lots of light and nutrients to do well. The easiest way to control excessive growth would be to add an algaecide to kill off the algae, and then use beneficial bacteria and pond dye to help reduce the regrowth.

Most string algae initially grows on the bottom and sides of the pond, only when these mats grow large enough do parts of it break off and float to the surface. So if you are having problems with floating mats, the best way to manage them is by addressing the algae growing at the bottom.

Although preventative maintenance can save you time later in the season if the spring workload gets ahead of you, know that there are ways to clean up ponds mid-season and get back on track to healthy and maintained ponds.