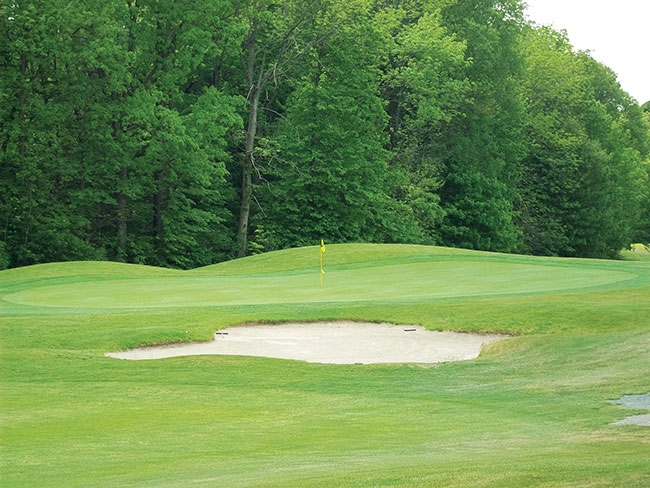 As director of the Guelph Turfgrass Institute and a professor with the University of Guelph’s department of plant agriculture, Dr. Eric Lyons says his goal is to move the turf industry towards sustainability.

Speaking before the Ontario Golf Superintendents Association at its January conference in Collingwood, he said each person’s interpretation of sustainability tends to differ, yet there are three recognized pillars of sustainability: economic, environmental and social. It’s not just about economics, he said, nor is it just about the environment. It’s mostly about social sustainability, he offered.

“A lot of what we do to maintain sustainability has absolutely nothing to do with economics or the environment,” Lyons said. “It has to do with people’s opinion of our industry. You’re in control of how your brand is seen. You can take hold of that and push forward.”

By his definition of sustainable action, one must act in a way so as to not prevent future generations from acting in the same way.

Lyons said people cannot rely on unknown innovations to save society, adding humanity has pretty much worked its way out of every problem it has created.

“Eventually, innovation won’t save us. We have to act in a way that doesn’t prevent future generations from acting this way.”

Plants are essential to sustainability and serve such important purposes as producing oxygen, preventing erosion, sequestering carbon and reducing urban heating. Although all plants do this, turfgrass is inherently different, he said. Turfgrasses have dense, fibrous root systems and a lot of tillers. They prevent runoff and help storm water management by slowing water’s movement across its surface. But the biggest difference between turfgrass and other plants is that turf is the only one that can be walked upon and played on. In fact it’s designed to be walked on, Lyons said.

It has evolved after intensive grazing by large animals, he said. Golfers can take divots out of turfgrass, and the plant heals up within a couple of weeks.

“Turf is different because it’s an urban plant that increases sustainability and has a wonderful social aspect that you can play on it.”

Lyons said that shortly after the Ontario government enacted its cosmetic pesticide ban on home lawns and sports turf, the University of Guelph pared back its number of natural turf sports fields from eight to two and now has five artificial fields.

“How is plastic more sustainable and better for our urban environment than a plant?”

But golf courses also have an identity crisis, Lyons added.

“They are viewed as inaccessible, private and for the elite.”

That may not necessarily be true, but it is the perception and “it hurts our sustainability.”

Golf courses are also perceived as monocultures that require high inputs and are a poor use of land, he said, noting if a golf course was replaced by a park, it would present a different problem. Parks are accessible to the public but tend to be poorly maintained and are seen as a cost to the taxpayer.

What sets a golf course apart is that it is viable, he said.

“Golf courses are the largest economically viable green spaces in our urban environment. In fact when you lay two or three golf courses next to each other along a river, it is the largest, biggest corridor of green space in most of our cities.”

Lyons said if a city or municipality cares about urban green spaces and cares about cooling, storm water management, wildlife and exposure to wildlife among young people, they should care about golf courses because they are the largest economically viable green spaces in the urban environment.

When talking about sustainability, there is a tendency to lose track of every management habit it costs, he said. There is a cost to social outreach and a cost to keeping members happy, he said. Ball roll distance, for example, was once correlated to putting green surface quality, but that’s no longer the case.

Lyons argued that a golf course looks better if that section of turf isn’t irrigated because it produces a striking contrast of colour and contrast of texture. But golfers will say they don’t want to visit a course to see burnt grass.

One must think of every action as having a value and a cost, he said, citing dollar spot as an example and wondering whether golfers really care if it’s there.

If a green is afflicted with a patch yet it doesn’t affect play, the question must be asked if the superintendent is willing to accept it, and perhaps it’s OK as far as the client is concerned.

Intelligent design is a means to improve the positive impact of golf courses by maintaining aesthetics, playability and maintenance, Lyons said.

“I hate playing four really bad holes to get to one beautiful view.”

He said he has played a number of courses where it seems the top of the ecosystem has been destroyed, such as trees being cut down to accommodate a hole that lends a picturesque view across a bay.

The generally perceived negative impact on golf is about 90 per cent perception, Lyons said, with watering, fertilizer and pesticide use, and carbon being the biggest targets, but golf is moving towards sustainability. Most of the research being conducted at the Guelph Turfgrass Institute is geared toward sustainability, he added.

Syringing when it’s hot is a leading cause of moss as well as “ridiculously low” mowing heights. Lyons said golf courses are setting up a system where a non-rooted plant is being chosen over a rooted plant. Watering a little bit every day or every other day will bring about significantly more moss than if watering is done every four days. If by July 20 mowing is being done at one tenth of an inch, a little bit of watering may have to be done every day. But by Aug. 20, when the weather starts to cool off, that same watering practice needs to stop.

“Give the vascular plant a chance to outcompete it (moss). If you do that you’ll also increase your rooting depth.”

Soil moisture meters tend to provide precise readings, but they are calibrated for sand, not soil, he said.

Turf gets a bad rap because of how much it is watered. Cities will issue bans on lawn watering, but residents can still freely water other plants. Lyons said one of his neighbours tore out his lawn in favour of bedding plants because he knew that once a municipal watering ban was enacted, he could continue to water his alternative plants.

“That’s why the estimations of turfgrass water use are completely wrong. They assume every one of you is watering the plant to saturation almost every day.”

Turfgrasses have a fairly high evapo-transpiration rate overnight and are adept at surviving drought as compared to their competitors. Their goal is to dry out the soil as quickly as possible, Lyons said, adding that – evolutionarily – wasting water when it’s clinical helps them compete against weeds that can’t survive drought. Turfgrasses want to be on the edge because weeds have less ability to compete.