There are many benefits to pond aeration, including a reduction in mosquito populations, reducing oxygen stress for fish, and removing toxic gases from water. 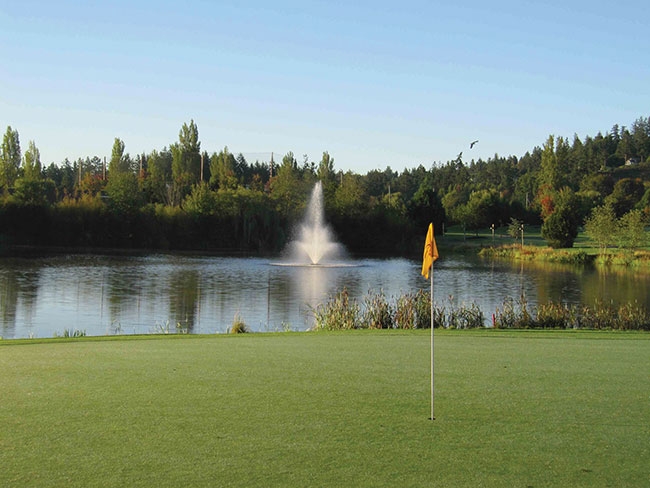 The pond at the 17th hole at Cordova Bay Golf Club on Vancouver Island is aerated for a variety of beneficial reasons.

There are many types of water aeration available on the market, ranging widely in application and price. As a result we are often asked, “How do you choose what is best for me?”

Let’s start with the different types of aeration that are currently available on the market. There are three main aeration methods for ponds and lakes: bubbler systems or air compressors, windmills, and fountains or display aeration. Each of these has its advantages.

Why aerate at all? By adding aeration you will improve the health of your pond or lake and prevent many potential problems. The benefits of aeration are many and they include:

Reducing oxygen stress of fish, such as summer oxygen swings and winter kill

Removing toxic gases from your water year-round, which will reduce bad odours coming from the water

Circulating the water with bubble columns or currents to prevent stagnation

Improving beneficial aerobic bacteria activity and the decomposition of muck on the bottom. Over the long term this will reduce algae and weed problems as well as sludge buildup that can fill in ponds.

Reducing the number of mosquitoes laying eggs in the water, resulting in having fewer mosquitoes around.

Bubbler systems consist of an electric air compressor, airline and one or more diffusers or air stones. The air compressor should be oil free and continuous duty so that it does not burn out or put oil into the water. The compressor is located at the electrical supply and the diffuser is located in the pond or lake with an airline connecting the two. An experienced pond equipment store should be able to help you find the right number of air stones that each pond requires based on the dimensions and depth of the pond or lake.

Bubbler systems are used as a form of low capital, low hydro use aeration. These systems usually put the diffuser on or close to the bottom to allow aeration of the full water column. The deeper an air stone is, the more contact time the bubbles have as they rise to transfer oxygen, and the more water they will draw with them. These aeration systems allow a pond to be aerated without adding a visual obstruction to the course. Additionally, airline can be upsized to run for great distances, as line loss is low with air. Running airline rather than electrical to the side of a pond is often far less expensive and easier to do.

Windmills aerate in the same way as a bubbler system by using a compressor to move air through airlines to the diffusers. The advantage to a windmill system is that they don’t require hydro and can be easily located anywhere on the course. Windmills also add to the visual landscape of the property, but must be located out of the range of fire from golfers to ensure they do not become targets. They are generally higher in capital than bubbler systems but repay themselves quickly with the lack of electrical expenses.

Fountains can be set up in a variety of configurations and the majority of commercially produced fountain kits have a pump mounted directly below a float and use nozzles to produce a display pattern. Display patterns will vary with manufacturer and a wide variety of styles and sizes are available. The electrical cords for these units go from the unit to the electrical supply near the edge of the pond and are protected by a GFCI for safety. Since they move the water they do use more electricity than a bubbler system. They are generally more expensive than bubbler systems due to larger motors, longer electrical cord and additional parts.

The biggest advantage to having a fountain is that they add a visual and audible feature to the pond that other aeration methods do not and offer a wide variety in display nozzles to suit the taste of the owner. Fountains can be used as a backdrop for photos taken on the course at weddings or tournaments. They also add a visual appeal to dining, day and night, if lights are added to the fountain.

The type of aeration that is best for each course will depend on several factors such as the availability of power, whether a visual display is desired and the available budget. Regardless of which type of aeration is used, it will always provide a significant improvement to any problems associated with a lake or pond.