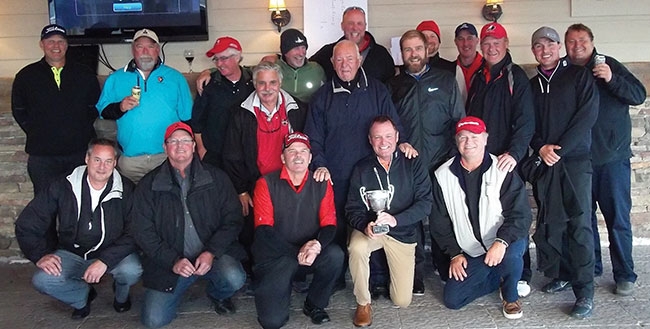 A jubilant WOGSA team is all smiles following a fifth consecutive win at the Fall Classic.

Today, the series is all squared up at nine wins apiece.

The Canadian squad scored a 22-18 victory over their American rivals in October at the Grand Niagara Golf Club, winning an unprecedented fifth consecutive time to even the 18-year-old series.

Each team fielded 10 twosomes who were either superintendents or association affiliates. Four points were at stake in each of the 10 matches during which twosomes from each side played six holes of scramble play (one point), six holes of best ball (one point) and six holes of singles play (two points).

The Canadians won six of the 10 matches and tied another to secure the win. Only two of the matches resulted in 4-0 sweeps – one for each side.

John Taylor, host superintendent and captain of the Canadian team, said there are no plans to change the format of the competition, even though it has gone through a metamorphosis of sorts since the early years of the event.

“We (he and Western New York captain Scott Dodson) have been pretty happy with how things have been going right now, especially since Canada has been on this great winning streak,” he said.

The series will switch to American soil in 2019 for the penultimate match before the event’s 20th anniversary the following year. Choosing a golf course close to the border is a prerequisite, Taylor said, noting it keeps travel simpler for both teams. There have been two exceptions to the rule over the years, however.

“We have strayed a bit over the years, going to the Mississaugua Golf Club once (in 2004) by special request,” he said. “It is the only event that guys usually volunteer their course without being asked.”

In 2011, the Fall Classic was played at the Irondequoit Country Club in Rochester – a venue of significant distance from the traditional U.S. location of the immediate Buffalo vicinity.

Taylor and Dodson haven’t looked too far ahead toward the 20th anniversary of the competition, although Dodson said he wishes to host the 2019 matches at Buffalo’s Park Country Club.

“At our ages, Scott and I don’t like to plan too far ahead,” Taylor said. “A lot can change in a few years.”

For the 2018 matches, golfers from both teams braved the extreme wind and cooler-than-normal temperatures.

“It was a little breezy today, but sunshine and happiness made it all good,” Taylor said.

The scores of each match were tabulated as groups returned to the clubhouse following the shotgun start. The participants from the fifth match were the last to arrive and submit their score, with the outcome of the Fall Classic hinging on the result. The U.S. side needed a perfect 4-0 sweep to re-claim the Fall Classic Cup from Canadian hands, but fell short when Don Liska of Deerfield Golf Club and Angelo Capannelli of Hutcheson Sand & Mixes upended Western New York’s Rich Gladhill and Drew Thompson, 2½ to 1½.

Taylor offered his take on the Canadian team’s run of five consecutive victories:

“I think the success is directly related to the core group of players from each side who enjoy each other’s company and seem to get along very well.”