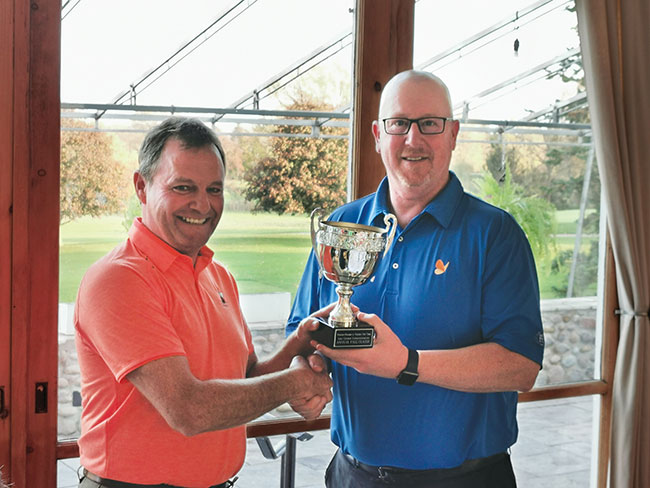 After keeping the Fall Classic Cup in his office the past five years, WOGSA captain John Taylor, left, returned the trophy to the Western New York superintendents association. Accepting for the winners is Thad Thompson.

New York’s 19½ to 13½ win gave the American side an overall 10-9 edge since the Fall Classic began in 2001. This year’s event was played at Fort Erie’s Cherry Hill Club.

Canada managed only two victories among the eight matches played, but the points earned from one of them could easily have been transferred to the U.S. team due to a significant difference in the teams’ roster sizes. The Western Ontario Golf Superintendents Association fielded a team of 22 superintendents and industry affiliates while the Western New Yorkers managed to recruit only a dozen team members.

Consequently, five Canadians were “loaned” to the U.S. team to even out the rosters at 17 golfers aside. Two of the matches had Canadian twosomes competing against each other while another saw a Canadian paired with an American to compete for the Western New Yorkers. Prior to the start of the matches, it was decided that if the final score were going to closely favour either side, then a card would be flipped to see where the points from the all-Canadian matches would go.

The lopsided scores from the matches involving bona fide members of the U.S. team rendered the card draw unnecessary.

The determined American team avoided a sixth straight loss, jumping into an immediate 9-0 lead after the first two matches. For the first time in the event’s history, one of the matches featured three golfers against three others, competing for five possible points. Four points were at stake in each of the remaining matches.

The matches consisted of six holes of a scramble competition for one point, six holes of best ball for another point, and six holes of one-on-one singles play for a point per winning golfer. The outcome of the Fall Classic was determined after the first four of the eight matches.

Cherry Hill was chosen as the venue for the 2019 matches to coincide with superintendent John Gall’s retirement at the end of the season. In odd-numbered years, the event is traditionally played on U.S. soil. Buffalo’s Park Country Club has already been selected as the Fall Classic’s 2020 site.

“You’ve been a fantastic supporter of our organization over the years,” he said.

Fittingly, Gall and partner Jerry Richard, superintendent at Woodstock’s Craigowan Golf Club, managed Canada’s only 4-0 sweep of a match, even if it proved to be too little, too late.

Heavy rains in the days prior to the competition prompted Gall to outlaw the use of carts on the course, forcing all golfers to walk – a first in the history of the Fall Classic.

* Canadian golfers on “loan” to the U.S.