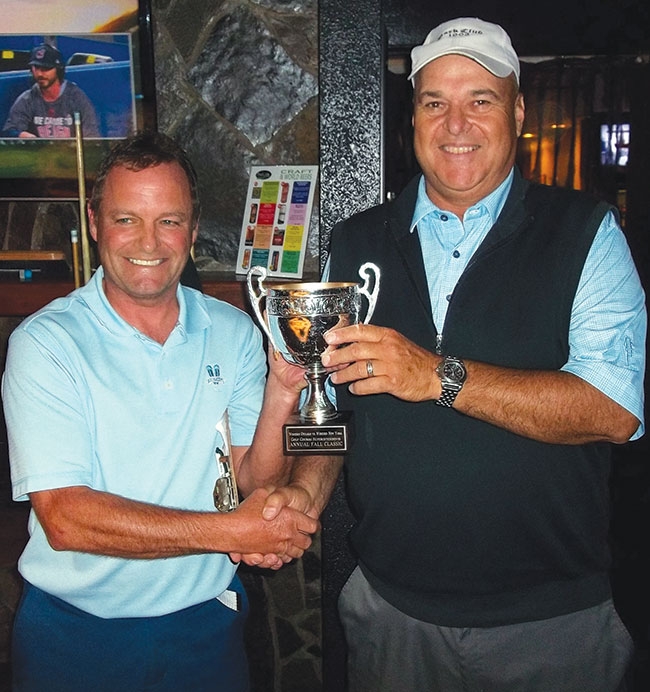 John Taylor, left, captain of WOGSA, is congratulated by Scott Dodson, captain of the Western New York team, at the presentation of the Fall Classic Cup.

A narrow 20½ to 19½ victory for the Western Ontario Golf Superintendents Association (WOGSA) on Oct. 18 has put the Canadian side only two wins shy of its American counterparts in the annual Fall Classic match play golf series.

The competition, played at Fort Erie, Ont.’s Cherry Hill Club, featured 10 separate matches between select WOGSA members and members of the Western New York Golf Superintendents Association. The U.S. side still enjoys a 9-7 series lead since the event was first played in 2001 at the then brand new Legends on the Niagara courses.

“Match play should be the only way golf is played,” said WOGSA team captain John Taylor, property manager at the Grand Niagara Golf Club in Niagara Falls. “It is a true test of man against man and battling your inner demons on the golf course.”

The victory at the private Cherry Hill Club marked the Canadian team’s third straight triumph. Taylor said the idea is not to stack the team with the best available golfers, but rather to reward those who have been active supporters of the association with spots on the roster. Superintendents who host WOGSA’s regular meetings/golf outings and those with regular attendance at the association events are given priority.

“We seem to have a good mix of low and higher handicappers right now which blends well with the American mix as demonstrated by the closeness of the results,” Taylor said.

The 20-man teams engaged in 10 matches with four points at stake in each match. The first six holes were played in a two-man scramble format with one point awarded to the winning twosome. The second leg of each match was a best-ball competition, with another point at stake. The final six holes were played as a singles competition, with one point awarded to the individual winner of his particular match.

Through the midway point of the matches, the Western New Yorkers grabbed an 11-9 lead and built it up to a commanding 18½ to 13½ advantage through the next three matches. But a 3-1 win by James Raynor of Vanden Bussche Irrigation and Paul Lenartowich of Skyway Lawn Equipment over Bob Kelly and Dave Meeter of the Western New York team, and a 4-0 shutout by Jeremy Julie of Sawmill Golf Club and Ryan Surette of Mystic Golf Course over Gary Keppell and R.P. Stringfellow in the final match turned the tide in the Canadian side’s favour.

John Taylor, left, captain of WOGSA, is congratulated by Scott Dodson, captain of the Western New York team, at the presentation of the Fall Classic Cup.

The event alternates between a Canadian and American venue. Attempts are made to select a site that is as close to the border as possible. A site for 2017 has not officially been selected, but there is speculation the Fall Classic may be held at Buffalo’s Park Country Club where the event has been played three times previously. Taylor said the club was going through an extensive renovation this fall and that the changes may be showcased during next year’s Classic.

The event is only four years shy of its 20th anniversary.

“I honestly wasn’t aware we were approaching 20 years,” Taylor reflected. “Time flies when you’re having fun. The event can sometimes be a challenge to put together with weather concerns in late October, guys crossing the border, etc. But always on the day of the event, everyone shows up, has a great time, and we can’t wait until next year to do it all over again.”

Following the matches, golfers from both teams enjoyed dinner and drinks together at the Trailside Bar and Grill in Ridgeway.