Brampton, Ont. has become the unofficial cricket capital of Canada 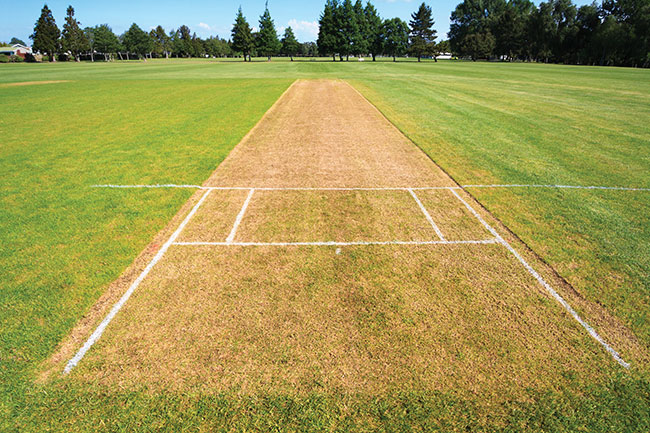 An artificial turf pitch (unlike the natural one pictured) has been installed for play by the North Peace Cricket Foundation in Fort St. John, B.C.

Cricket is considered to be the de facto national sport in at least eight countries of the world. In Canada, the game has traditionally taken a back seat to hockey, baseball, football, soccer and a number of other sports, but it’s popularity is on the rise in this country, and in one city in particular.

Brampton, Ont. is unofficially recognized as the cricket capital of Canada. Currently, the city has 18 cricket fields – seven of which are irrigated and whose pitches are either natural, artificial or jute mat.

Prior to 2018, there were 16 cricket fields in Brampton. Five of the fields were dedicated to the sport with four of them undersized.

Brian Macklin, supervisor of parks maintenance and operations in Brampton and a board member of Sports Turf Canada, spoke in the winter at the virtually-presented Ontario Turfgrass Symposium, about the challenges the city has faced in growing its cricket program. A large cricket presence had already existed in Brampton, but enthusiasm for the 2019 Cricket World Cup, played in England and Wales, propelled local interest in the sport to greater heights.

Prior to the World Cup competition, Patrick Brown, who was elected as mayor of Brampton in 2018, wished to see a new state-of-the-art cricket and multi-purpose stadium constructed that would allow the city to play host to the 2020 Global T20 Cricket Tournament – Canada’s largest cricket competition. Although the COVID-19 pandemic forced the event’s cancellation, the game’s popularity continued to grow.

As word of the proposed new cricket stadium began to circulate, Brampton’s cricket user groups began to press the city with a number of demands for its fields.

“As we tried educating the people, there was quite a bit of pushback from the user groups and at times they were questioning if we knew what we were actually doing out there,” Macklin said.

Mowing at a half-inch
The groups’ demands posed a number of maintenance challenges for the city’s parks department, the most notable of which was a request to mow the playing surfaces at a half-inch height.

Previously, the city’s cricket fields were mowed at one inch for irrigated playing surfaces and two inches on fields without irrigation.

“Generally, this was a good height to produce healthy turf,” Macklin said, noting that fields not dedicated to cricket meant having to place an “overlay pitch” between two soccer fields to allow games to be played with sufficient dimensions. The combined soccer fields allowed for acceptable outfield space, but were mowed to soccer standards.

Before adopting the overlay solution, in which a 22-yard-by-10-foot central pitch strip was placed between side-by-side soccer fields, cricket fields were built on whatever land was available. The outer reaches of one of the city’s first fields infringed upon adjacent buildings, producing a tighter field than what cricket players were accustomed to playing on.

“Because cricket takes up so much space, we started developing overlay cricket fields which solved the issue of having this large amount of space required, but we’d have multiple sports on it. In the beginning, it was great for both sides, but it did create quite a bit of maintenance headaches in terms of bringing nets on and off. When soccer was playing, we needed to remove those nets for cricket to play the next day.”

The overlays, which were either artificial turf or jute mats, represent the central part of the field between sets of wickets, where the bowler faces the batsman.

By 2018, Brampton’s user groups were growing, and the city’s cricket leagues were forced to turn people away because of insufficient facilities. Not only did the groups want the existing undersized fields upgraded, they wanted natural turf pitches installed as well.

Between the demand for natural turf pitches and a field mowing height of a half-inch, the sport was beginning to outweigh the needs to produce healthy turf, “and we were going to have some drastic changes made to our maintenance program,” Macklin said. “We knew that cutting them lower would have an impact on our turf maintenance program.”

Cutting cricket fields at a half-inch would not only have a bearing on plant health, it would increase costs for operations and capital equipment, he said, adding it would require more homework to learn about the various implications.

Brampton’s cricket fields had primarily been grown to Kentucky bluegrass with some perennial ryegrass and fescue mixed in. But, Kentucky bluegrass doesn’t fare well when mowed below an inch, and, in order to move forward, Macklin said new bluegrass dwarf varieties that could withstand shorter cuts were adopted.

The newer varieties cost more, he said, but, “I think the price is worth it. I don’t think we’d be able to do it with what we had before.”

Macklin relied on advice from the University of Guelph and data from National Turfgrass Evaluation Program (NTEP) trials to make the best possible selections. 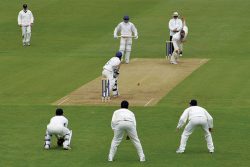 A bowler faces down a batsman in a cricket contest. photo: Lance Bellers/Adobe Stock Images

New equipment needed
The dramatic changes in mowing height would have an impact on the city’s equipment needs. Brampton’s existing reel mowers could cut only as low as three-quarters of an inch to an inch. Newer mowers that could cut at a half-inch would be needed, and mowing would have to be done more frequently in order to achieve the recommended shearing of only the top one-third of the leaf blade.

“If you have a shorter grass blade that’s only half an inch and you have a quarter of an inch that you’re damaging, there’s not going to be a whole lot of healthy plant left.”

Up until 2018, when mowing was done at one and two inches, irrigated fields needed to be cut again when the turf reached 1.5 inches while non-irrigated fields were subsequently mowed when blades grew to three inches.

“In terms of keeping up with that, we were going to need three new mowers above what we currently had, as well as three operators to run these mowers and keep on top of things so that we’re not allowing that turf plant to get beyond that quarter-inch of growth.”

Each turf species has an optimal range of height, and when mowing heights decrease outside of that range, it results in decreased turf density, a reduction in photosynthesis and a decrease in root growth. Macklin acknowledged that once Kentucky bluegrass roots decline, there is less water uptake and an increase in disease and weed pressures, requiring more inputs and more budget.

Kentucky bluegrass is prone to thatch buildup and opens the door for annual bluegrass invasion when it’s cut so low.

Not being able to use traditional chemical pest control products means having to manage disease, weed and insect pressures through increased cultural practices, thatch management, improved drainage, water management, proper fertility and the delivery of a quality cut. When playing host to national or international events, however, the city can apply for a pesticide spraying permit.

The city is looking to adjust its fertility program to adapt to the lower height of cut. Previously, 4.5 pounds of nitrogen were applied to irrigated fields and 2.5 pounds on non-irrigated fields. Because the plant is undergoing greater stress at its lower cut, more applications may be considered, Macklin said.

Implementing natural turf pitches is an altogether different challenge, he said. It involves packing down a baseball mound-type clay, seeding it to perennial ryegrass and mowing it right to the ground once it starts growing. It produces a hard, brown-coloured surface that is conducive to the bowler and batsman.

Multiple pitches can be produced for dedicated fields, allowing a new one to be game-ready while the others have time to regenerate. Natural turf pitches were earmarked for five fields.

In order the meet the stringent demands of the cricket-playing community, Macklin said the city needed more employees and additional equipment. Council approved a request for more than $800,000 in capital expenditures and another $350,000 in operating expenses.

The $350,000 operating budget covered eight staff as well as the cost of water, fertilizer, seed, topdressing materials and reel sharpening.

As the city looks toward the future, plans are to increase the number of irrigated cricket fields, replace jute mats and better educate user groups.