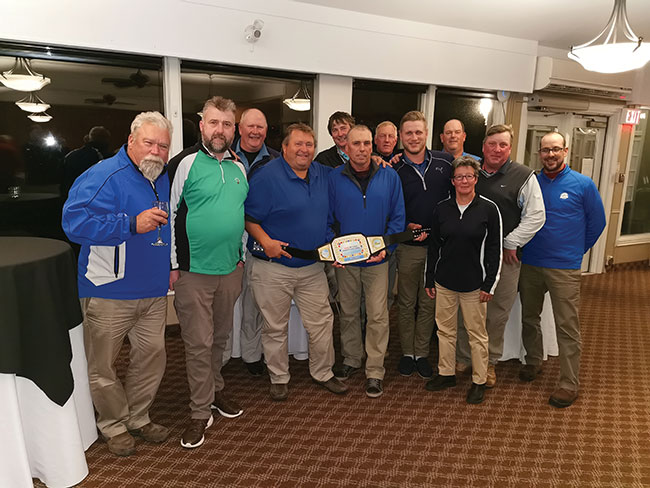 Member superintendents of the Greater London & Area Golf Superintendents (GLAGS) represent a cross section of various generations. Whether they’re working with a younger set of employees or older workers or a blend of both, they need to understand the strengths and weaknesses of each generation.

Today’s workforce can span as many as five generations of employees, from traditionalists born prior to 1946 to Generation Z workers born from 1995 onward. Each generation has its merits and its own unique set of characteristics.

Bradley Jenkins, franchise owner of Express Employment Professionals in Cambridge, Ont., said it can be a challenge for these individuals to work as a team, especially when they may be separated by decades in age and have strengths and weaknesses associated with their particular generation.

Speaking in Waterloo in December at the 31st annual Ontario Seed Company/Nutrite professional turfgrass seminar, Jenkins said golf superintendents must better understand the characteristics of each generation and learn how they might interact with one another to form the best team possible. With more and more Generation Z employees entering the workforce, it’s important for golf superintendents or managers in any other field to adapt to them for the betterment of the company, he said.

The Z generation represents about nine per cent of today’s workforce, but is expected to balloon to one-third of the labour force within the next five years. Jenkins said what sets these individual apart from others is that they are tech savvy, are focused on health and the environment, and value their privacy. On the job, they are used to getting their information quickly and efficiently.

“So maybe don’t give them that long-term project,” Jenkins recommended. “Short-term projects work very good for someone from that generation.”

Generation Z workers tend to be visually orientated and can multi-task, usually figuring things out for themselves.

Traditionalists, or those born before 1946, have all but made their way out of the workforce, accounting for less than two per cent of those actively employed. Life moments they’ve experienced include the Great Depression, the Second World War and Jackie Robinson breaking Major League Baseball’s colour barrier.

The older generation of workers tend to be loyal, are good team players, conform to and follow the rules, and are less likely to initiate conflict, but can be change-resistant.

“I like traditionalists,” Jenkins said, adding he has a few people from that older generation currently working for him. “I can relate to them. I get on well with them.”

He said if a superintendent or manager wishes to attract or retain a traditionalist, he should set clear job expectations. They need to know exactly what they are expected to do. Because they are followers and conform, they will follow to the letter, he added.

“Be fair and be consistent. They’ll appreciate that. Demonstrate those personal touches if you want to attract and retain a traditionalist.”

“If you put them with someone who is disengaged or actively disengaged, they’re going to be rubbed up the wrong way, and they’re not going to like it.”

Baby boomers, or those born between 1946 and 1964, still represent a healthy percentage of the current workforce, but will account for only eight per cent by 2025 as more are retiring each year. At 55 years of age or older, they have experienced such memorable moments in history as the first moon landing, the Vietnam War and the Woodstock rock concert.

They are known for their strong work ethic, self-assuredness, confidence and their competitiveness.

“If you have a lot of baby boomers on your team, make sure they have a goal. You will get the best out of them. They will then become engaged. They are resourceful, they are team orientated and are disciplined.”

Because a baby boomer’s parents were traditionalists, they have inherited many of the older generation’s values, including a belief in service.

“Work has to come first for a boomer. They want to please you. They are good team players.”

Baby boomers can have their downside, though, Jenkins said, noting they aren’t naturally budget minded and are uncomfortable with conflict.

“If you like the boomers and see value in them and you want to attract them, these are the things you need to look for. Ask for their advice. Show you’re listening. It’s important to a boomer. Respect and honour their experience. Explore strategies to retain their knowledge.”

The X generation of workers are 41 years of age or older and have experienced such life moments as the Challenger shuttle explosion and the dot-com bubble burst. They are defined as being independent, problem solvers, quick to adapt and proponents of the bigger picture. Unlike baby boomers – who put work first –Generation X employees want a balance between their work and home lives. They tend not to conform and are a bit more relaxed.

Jenkins said their strengths include their ability to adapt, their independence and their creativity. They are not intimidated by authority, they can be impatient, they’re not natural relationship builders, and they can be cynical.

“They work to live. They don’t live to work.”

By 2025, Generation X employees will represent 28 per cent of the workforce.

The Y generation – better known as millennials – are currently between the ages of 24 and 40 and will represent one-third of the workforce within the next five years. They experienced such life moments as 9/11, the mass recession of 2008-09 and the rise of the smart phone. They are social, tolerant, often efficient, and tend to be flexible. They need to know what they are doing and why they are doing it. They will become engaged and take up less of a superintendent or manager’s time because of their engagement.

“They’re going to get the project done because you believe in them and they understand what they have to do. But they need to know why they’re doing it because they want to work for a cause.”

Jenkins said their potential strengths include believing in group-work, their optimism, an understanding of what they have to do, a quality of tenaciousness, and their want to be a “hero.” They are also technologically savvy and are capable of multi-tasking.

Challenges associated with millennials include their need for supervision and structure and their inexperience handling difficult people and issues. They tend to be more comfortable communicating with others via text messaging than speaking on the telephone.

“Conform to their way, then they’re engaged and will work with you. Then they’ll understand why. Don’t fight it. Learn from it.”

Attracting and retaining a millennial requires feedback from the manager, Jenkins said, because workers from Generation Y need to know how they’re doing.

“Help them connect to the mission of your organization. Your organization should have a mission because the next thing is you will have guiding values to connect to your mission. Then you hire people who have the same values that you do.”

Millennials currently account for 34 per cent of the workforce.

“There are now more millennials at work than any other generation.”