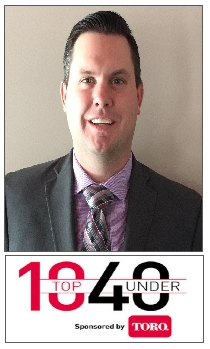 May 21, 2019: The class of 2019 of Canada’s Top 10 Under 40 has been helping to shape the future of the Canadian turf and grounds maintenance industry since entering the profession, and these young individuals are poised to ensure that the qualities of leadership, innovation and teamwork are in strong supply for years to come.

Anderson’s interest in turfgrass management flourished during his early teenage years while working for Doug Meyer at Beaconsfield Golf Club, outside of Montreal. He began as a labourer, progressed to student intern and then ascended to second assistant superintendent following his graduation from the University of Guelph.

The year 2005 was a significant year for Anderson who, aside from his graduation, received scholarships from the Canadian Golf Superintendents Association and L’Association des surintendants de golf du Québec, and was a finalist for Toro’s Future Superintendent of the Year honour.

From Montreal, Anderson joined ClubLink and took a position at the Kanata Golf & Country Club near Ottawa. After five years there, he moved back to Quebec to become superintendent at the Club de Golf Le Fontainebleau where Champions Tour events were held in 2010 and 2011.

His career has progressed rapidly and has led to his current and challenging post at the exclusive Mount Bruno Country Club. The club insists on holistic approaches toward turfgrass management and course conditioning, and Anderson and his team have met the challenge by reducing pesticide use and integrating alternative management protocols.

He also contributes as a member of the ASGQ’s board of directors and is pursuing a degree in environmental management at Columbia Southern University.