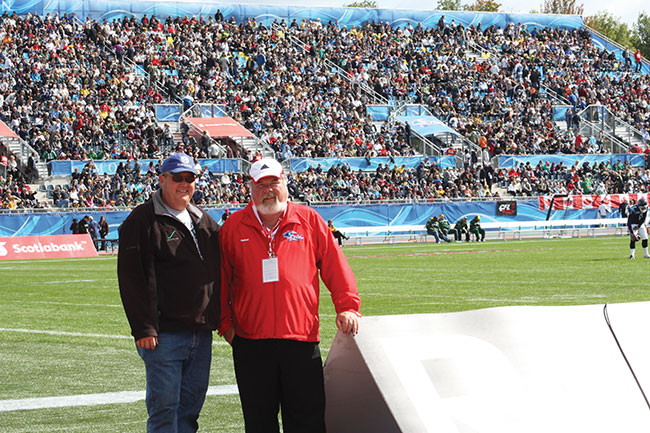 Gord Horsman, right, with Gord Dol in 2010 at the University of Moncton where the Canadian Football League played a neutral site regular season game.

The man responsible for creating a liaison between New Brunswick and Sports Turf Canada has been named the association’s sports turf manager of the year. Gorden Horsman, superintendent at Moncton’s CN Sportplex, is the first recipient of the award from east of Ontario.

“I feel very lucky to have this opportunity to be voted as sports turf manager of the year for Canada,” he said. “It’s not bad for a Salisbury boy.”

Sports Turf Canada began as an Ontario-based organization – originally called the Sports Turf Association – but Horsman’s interest in what it offered its members led to the association spreading its wings into Atlantic Canada and precipitated a change in name to Sports Turf Canada.

Horsman became the association’s first non-Ontarian to be elected to its board of directors, a position from which he has since stepped down. Shortly after making a connection with Atlantic Canada, Sports Turf Canada expanded into British Columbia and Alberta by adopting a relationship with the Western Canada Turfgrass Association.

Horsman singled out former Sports Turf Canada executive director Lee Huether and board member Gord Dol, former owner of Dol Turf Restoration, as his key contacts who helped expand the association into New Brunswick. Currently, another of New Brunswick’s members – Bernie Hurley of the Town of Oromocto – is a member of Sports Turf Canada’s board of directors.

Sports Turf Canada has held a couple of successful fall field day events in Halifax and Moncton in recent years.

“People from all over were here, and we had great turnouts.”

Perhaps Horsman’s crowning achievement in the industry was the role he played in the development of Moncton’s CN Sportplex. Originally called the Moncton Common, the home of 10 ball diamonds and six soccer fields has become renowned across Canada as one of the country’s foremost sportsplexes.

Before working for the City of Moncton, Horsman had access to a number of sand and gravel pits, turning out USGA-spec sands, blends and mixes. It presented an opportunity for him to enter the golf course construction market.

“That was a turning point for me because I had sand pits and gravel pits all over New Brunswick.”

It was a small operation, he said, but it did well at the time.

“We used to do a lot of composting before composting was the thing to do.”

His company was a supplier of potting soil material to a large peat moss company. Although his foray into the golf market didn’t work out as well as he hoped, opportunity knocked just prior to the turn of the millennium when plans were underway for the construction of the Moncton Common. He was sought after by the construction contractor to look after the project’s blending and sand mixes.

Supplying field material
Horsman was hired by Turf Masters to blend and supply the necessary materials for the sand-based fields.

Following the construction of the 10 ball diamonds and six soccer fields at the since renamed CN Sportplex, Horsman’s involvement in the project impressed then Moncton parks director Rod Higgins enough that he was offered a full-time job with the city to look after its sports fields.

“I wasn’t going to say no to an opportunity like that,” Horsman said, noting the timing of the offer couldn’t have come at a better time when things weren’t going so well with his business.

Since then, Horsman became involved in two other major construction projects in Moncton – Kiwanis Park and Hal Betts Commemorative Sportsplex. Along with the CN Sportplex, the facilities helped establish Moncton’s reputation for its first-class sports venues. Kiwanis Park is the home of junior baseball and operates at capacity. Hal Betts Sportsplex is a softball and slo-pitch facility that is also at capacity.

“We’re keeping up with what we’ve built.”

People from across Canada have visited the CN Sportplex over the years, either as competitors or spectators at a number of high-end tournaments and events.

“People cannot believe what we have here compared to Toronto or Edmonton or Vancouver.”

More recently, Horsman oversaw the tearing up of one of the natural turf diamond infields at the CN Sportplex in order to accommodate the city’s “Field of Dreams” project. With funding from the Toronto Blue Jays’ charitable Jays Care Foundation, President’s Choice and other donations, an artificial turf infield was installed, allowing the diamond to become fully accessible.

“That was a wonderful project to be involved with. It went really well and people were just nothing but impressed by the artificial infield. It’s wheelchair accessible and it sees a lot of use. It’s a nice addition to the site.”

About eight years ago, Horsman joined a Plant Health Atlantic steering committee that was struck to persuade the New Brunswick government not to ban pesticide use in lawn care and on sports turf, and to allow only licensed professionals to do the work. The province agreed to adopt integrated pest management “as long as we didn’t spray more than 50 per cent of the aggregate properties.”

His work on the steering committee led to him becoming Plant Health Atlantic’s chairman of the board – a position he held for two years before stepping down three years ago.

“I enjoy coming to work every morning. There are a lot of challenges with employees and people and the public, but we’ve had so many nice comments and accolades for this site (Field of Dreams) that I feel lucky to be part of that. We have some really incredible people working for the city who buy into what we have and what we’re trying to do and keep the end users happy.”

Horsman bolstered his knowledge of the industry by taking the University of Guelph’s turfgrass managers’ short course a number of years ago. 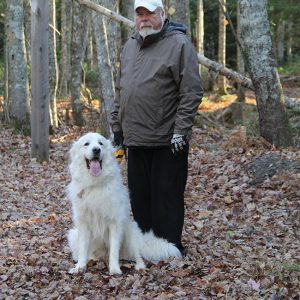 Horsman and his faithful companion Barkley. 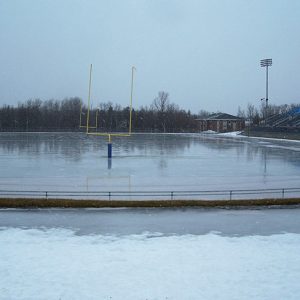 Prior to being converted to an artificial turf surface in 2015, the University of Moncton’s natural surface often succumbed to ice cover due to poor drainage.

A big challenge
One of the biggest challenges he has faced during his tenure with the city was the preparations for the 2010 World Junior Track and Field Championships at the University of Moncton’s sports stadium, called Croix-Bleu Medavie Stadium. He was tasked with looking after the infield for the field events.

“That was a huge challenge. I had no idea what would be involved with it, but when it was done I was done. It was the busiest week I’ve ever had in my career – trying to get everything ready.”

Horsman said he and his “crackerjack” crew worked 14-to-16-hour days preparing for the championships and then worked from midnight until 6 a.m. on the field “to have everything camera-ready” during the week of the event.

Another notable career challenge he faced was getting the same field ready for Moncton’s first-ever regular season Canadian Football League game, which was played in September 2010 between the Edmonton Eskimos and Toronto Argonauts. The project involved the installation of artificial turf in the end zones.

“This presented new challenges that we did not expect. One jumped out at us when the teams had concerns that the line of scrimmage was the going to be on the goal line, which meant players would be digging in on the natural grass and the artificial. This was a ‘holy crap’ moment, and Gord Dol and I looked at each other and said let’s get 30-foot game ready and see what happens. Two or three hours later the teams came out and dug in like Clydesdales. They did not even leave a mark or a ripple on the artificial turf. Ian Fowler, who was instrumental in bringing these big events to Moncton and has since passed, came to us and said, ‘I knew you guys could pull this off.’ I looked him and said, ‘I am glad you knew we could do this.’”

Two other neutral-site CFL games have since been played there.

The stadium was converted to a full artificial turf surface in time for the 2015 FIFA World Women’s Cup, which Moncton co-hosted with Edmonton, Montreal, Ottawa, Vancouver and Winnipeg.

“When they took the natural grass out, I handed my keys to Jacques Bujold and Sara Yeomans – who look after the city’s other sports facilities – and said, ”Here you go.’ They are the experts in this area.”

While continuing to promote Sports Turf Canada in New Brunswick – with Moncton, Oromocto and Saint John all on board – Horsman is contemplating his future upon retirement from the city, which he speculates will be in about five years. Sports turf consulting is something already on his mind when that day arrives.

Like all other Canadian municipalities, Moncton is dealing with the impact of COVID-19 on its sports fields. Minor sports leagues in the city are “champing at the bit” to be playing, Horsman said, but they must wait until the green light is given by health authorities.

“We’re living through a game changer. How we deal with it will be remarkable.”

Horsman said being acknowledged as sports turf manager of the year in Canada may not have been possible without the support of his wife, Barb; children Alex and Amanda; his grandchildren; Dr. Bob Daniels, adjunct professor of turfgrass science at Nova Scotia Agricultural College; Dr. Eric Lyons and Dr. Katerina Jordan of the University of Guelph; Nicole Cassie, technical liaison with the Field of Dreams project; the Stretch family, owners of Turf Masters; George Bannerman of Bannerman Ltd.; and Ken Brown of Plant Health Atlantic and his wife, Judy.

The change in command was made official May 28 during a virtual annual general meeting of the association. Henderson has been with Sports Turf Canada for 19 years.

“I’m very excited about going forward with the board,” he said. “There are lots of fresh faces and good ideas, lots of good initiatives and we’re utilizing technology for our advantage.”

Pavely has stepped down following a two-year term as president.

“It’s rather strange to think that my term is coming to an end,” he said. “It’s been terrific and I’ve certainly enjoyed dealing with absolutely everybody. Thanks to the members for giving me your trust and support in electing me to the board.”

The strategies enacted by the board in 2019, especially in the development of education and training initiatives, were a highlight of his presidency, Pavely said.

“The feedback we’ve received has been very, very good, and we’ll continue to improve it as time goes on,” he said. “Secondly, we wanted to increase our number of members and improve our retention rates. We’re continuing our efforts to attract new members and encouraging existing members to retain their memberships.”

Pavely also noted the success of a Sports Turf Canada field day and instructional course in Saskatchewan in 2019.

“Both were very well received, and we have support going forward for more opportunities with other industry organizations, and it’s a fantastic chance for us all.”

“Our strategies for 2020 are currently under review, and this (COVID-19) pandemic has allowed us to step back and look at all of our programs and services in ways to ensure increased value to our members. You’ll see change, and we’re excited to work on new initiatives. So stay tuned as our board will meet shortly to set up plans, and we’ll share those with you.”

Pavely acknowledged the support of industry suppliers “who continue to support us through all our operations.”

Ending his term as a board member is past president Tab Buckner of the Township of Langley, B.C. Pavely said his predecessor will continue to be actively involved with the delivery of Sports Turf Canada’s instructional courses in the area of natural and synthetic turf fields.

Visit www.turfandrec.com to see the full roster of other Sports Turf Canada board members.