IN the world of sports turf management, few have mastered the art of mowing patterns. Sculpting a field with unique designs is truly a craft that requires patience, dedication and a detailed game plan.

As the Sports Turf Manager’s Association second annual “Mowing Patterns Contest” winner in 2014, here are a few tips to utilize when using your natural grass field as a canvas.

Before diving into intricate mowing patterns, it’s important to devise a plan. I recommend drawing the pattern on paper so you know what you’re doing before you start cutting. 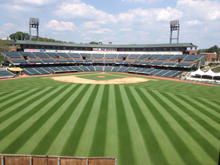 Once deciding which pattern you would like to mow, make sure your team is on the same page and get to it!

A critical aspect of mowing is knowing how high or low to cut the grass.

A higher mowing height is what I would recommend. Typically, I mow at one inch for cool season grass, such as bluegrass, and three-quarters of an inch for warm season grass, such as Bermuda. The higher the grass is, the greater contrast is projected between light and dark blades, vastly improving pattern colouration.

Straight as an arrow

Another key element to bear in mind is how straight each line is. Three tools I always carry with me are: a can of spray paint, string lines and a tape measure.

Once laying down a string line or tape measure, I spray a dot to mark the field for precision. After spraying, you can remove the tape measure and lines to avoid mowing over them.

Utilizing a tape measure can be helpful to keep the integrity of your lines in check.

Baseball is typically the sport with the most flexibility with patterns due to the outfield. Football and soccer require more painted field lines that align with the rules of the game, such as first downs and offsides. This makes it more difficult for a sports turf manager to deviate and express his or her creativity.

Once you are ready to begin cutting, the primary piece of equipment you’ll need is a reel mower.

Personally, with Memphis we utilize the Toro Triplex 3100.

Each reel has a roller, knocking the grass down and laying it over, creating a pattern.

In order for the pattern to pop and look clean, I recommend mowing it in a few times. We also mow daily during homestands, which certainly helps the pattern show, but is mainly to keep the playing surface consistent on a day-to-day basis.

Additionally, when mowing any pattern I always start in the same place so the pattern won’t shift.

Cooler season grasses such as bluegrass are typically better for mowing patterns because they are cut higher, although you can still produce patterns with warm season grasses as well.

In the end, one of the most fundamental aspects of mowing patterns is how the light hits the grass. To achieve this, it’s encouraged to bend the grass towards or away from you, depending on which shade of grass you’d like to project.

Something else to consider is ensuring all patterns are even and consistent to prevent balls from hopping and bouncing strangely in the outfield. This instills trust in your home team’s manager and players so they will be more confident in your ability to produce a consistent playing surface.

Mowing patterns require a lot of practice, but are well worth it once the final result comes to fruition.

The business of mowing patterns is getting more creative by the inning. The proverbial torch continues to be passed down by sports turf managers, with each new generation stepping up to the plate.

Last, but not least, don’t forget to have fun!

Ben Young is the 2014 Sports Turf Managers Association’s second annual “Mowing Patterns Contest” winner. He is the head groundskeeper for the Memphis Redbirds, Triple-A affiliate of the St. Louis Cardinals. Formerly the head groundskeeper of the Double-A Altoona Curve, he has won numerous awards for his work, including 2013 Eastern League Groundskeeper of the Year and 2010 “Craig Kuhl” award for best field in the Frontier League. A Southeast Missouri State graduate, Young hails from Germantown, Ill.