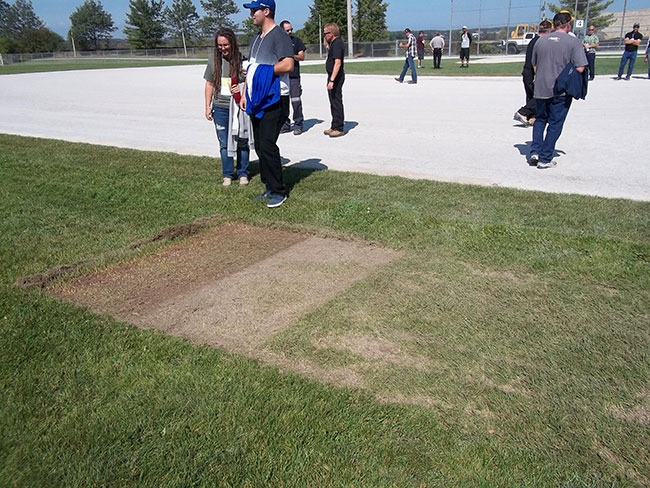 When a sports field needs a season-ending overhaul, a number of things can be done to have it ready for play the following spring. It can be aerated to relieve compaction, overseeded to re-establish turf in worn areas or even sodded in such high-traffic areas as goalmouths and the field’s centre.

If thatch is excessive or if the field has become uneven, sports turf managers may want to consider another option: fraze mowing.

Fraze (sometimes spelled fraise or fraize) mowing is an aggressive renovation process geared toward the removal of excessive thatch.

“What we’re trying to do is get rid of that organic layer that’s in some of our fields,” Greenhorizons Sod Farms’ Steve Schiedel said in a presentation to sports turf managers attending Sports Turf Canada’s annual field day in September.

Thatch is a blend of grass clippings, roots, rhizomes and other organic matter that has built up over time, creating a thick layer above the surface. A sufficient amount of thatch is beneficial to turfgrass. It protects the crowns of the plant and provides a cushiony surface that promotes player safety.

“A healthy thatch layer is important in our sports fields, but too much is a problem,” Schiedel told the gathering at the Richmond Green Sports Centre and Park in Richmond Hill, Ont. “There are a lot of negatives to excessive thatch.”

He said when the thatch layer is allowed to build up, roots and rhizomes want to grow into it. It can also dry out quickly, he added, but it also gets wet and harbours disease and insects, and turf becomes more shallow rooted and has more difficulty handling drought.

“The physical movement of that sand within the thatch layer can actually grind the thatch into smaller pieces, and it keeps air in there and helps thatch decompose a little bit better.”

“Be aware that this is an aggressive process,” Schiedel said. “It’s not just a simple ‘I’m going to do this and solve all my problems.’ It needs to be part of a complete strategy whether you’re going to overseed, topdress, core aerify, slit seed or sod. It’s a tool or piece in a larger process. It’s not just a solution on its own.”

Schiedel was involved in a recent fraze mowing project on a couple of fields at Hamilton’s Mohawk Sports Park. A video of the mowing process was presented, showing the machinery going down into the thatch about an inch and a half or an inch and a quarter. Shallower depths were realized on the outer edges of the fields where only the organic matter was taken out.

Fraze mowing originated in Europe, Schiedel said, adding it is believed a group of high-end soccer field groundskeepers got together with an equipment manufacturer and some local university academicians to come up with a concept to remove organic matter from playing fields and establish how the process could improve the renovation of a number of high-end soccer pitches.

The process not only removes organic matter, but annual bluegrass and its seeds that tend to harbour in the thatch layer. Both seeds and weeds can be removed through the process.

“In a perfect world, fraze mowing would want to leave the rhizomes and stolons of your field intact so that they can regrow along with some possible topdressing, overseeding and an aggressive nutrition campaign.”

Among the manufacturers of fraze mowing machinery are Toro, Blec and Stec. The machines use either a straight bar tool, a carbide-tipped tool or a 90-degree tiller-type blade. The decision to fraze mow light, medium or heavy depends on individual field conditions and how level the playing surface is.

“If it’s uneven, you’re not going to be able to do a really nice fraze mowing job.”

A shallow setting will reach only about 20 per cent of a field’s turf, leaving the remainder untouched. Going deeper to get at more of the turf will result in all of it being removed from high spots on the field.

“A lot of planning needs to go into it. Consultation needs to be done (with someone experienced in fraze mowing).”

Schiedel said if a field in uneven, a sports turf manager will either have to go deep or elect to go with sod or an aggressive seeding campaign. A fraze mowing program will have to be planned carefully to deal with such scenarios, he said.

Even a light fraze mowing will remove a lot of organic material that must be contained accordingly. While the turf is being mowed, a collection trailer hauled by a truck must move alongside the mower to catch the cuttings. From there the collected materials will have to be carted to a nearby dumpsite where it can be composted. Fraze mowing multiplies the amount of material that is generated through verticutting by about 10.

“There’s a lot of material to deal with, so you need to plan on that.

“If your field is perfectly level and smooth as a billiards table, you can use this process and just take off a skim. Most of our fields are not that table top level and smooth.”

Uneven fields will need to be mowed more aggressively, setting them back with time needed for their recovery.

“This needs to be talked about before you decide to use this process.”

Fraze mowing will remove small divots and undulations, but if it’s uneven it must be terra-planed, Schiedel said. Terra-planing removes all organic matter and gets right down to the soil, creating a smooth surface by leveling out divots and undulations. If a terra-planed field is sodded, it can be ready for play in three to four weeks. If it is seeded, it may take half or three-quarters of a year.

Whether a field is fraze mowed or terra-planed, its irrigation system must be working well, he said. If a water system isn’t ready or if it has already been winterized, the process will likely fail because water is needed immediately after mowing, Schiedel said.

“Cover those stolons and crowns with a well draining sand and that will help improve drainage.”

He suggested an eighth or a quarter-inch of sand be used to help create a healthy growing environment, and it should be done as soon as fraze mowing is complete.

If seeding is chosen, seed must get into the soil. Putting seed into organic matter or thatch will only work if 14 days of three-quarters of an inch of rain falls, allowing good germination. Seed-to-soil contact is imperative.

If terra-planing to remove all the organic matter is the desired strategy, a more traditional seeder will work if there is open or bare soil. The field can also be core aerified four or five times in different configurations to relieve compaction and dragged.

The field can then be Brillion seeded, fertilized and irrigated.

“You’re going to be rockin’ Within three to five months, you should be good to go.”

“Hopefully you can leave your water on until the third week or end of October.”

A roller in the front and another in the back perfectly shave off between the two rollers at a detailed depth that can be adjusted.

If a sports turf manager’s plan is to sod a field, Schiedel said he recommends terra-planing to enable the sod to come into direct contact with the soil instead of being laid atop organic matter.

“If you’re overseeding, be aware that you’re not going to have any recovery from your rhizomes and stolons. If you did terra-plane and remove them all, you’re going to need to give yourself more time for that seed to establish.”

If a sports turf manager is able to fraze mow a field that is sufficiently level, he will realize some grow-back which Schiedel said is the initial concept of the dethatching process.

For fields requiring terra-planing, he suggested mowing the centre of the playing surface where there is most wear, sodding that area and then fraze mowing the outer areas before topdressing and overseeding the perimeter. Within a month to six weeks, “you’ll have a really, really, really high quality field ready to go.”

Taking away the terra-planed and fraze mowed material to be turned into compost is important, Schiedel said.

“It’s an excellent compost that can be mixed with some sand to next year do some topdressing and overseeding.”

Schiedel said the material composts quickly due to its nutrition content. When it’s periodically turned over the course of a couple months, an “excellent product” will be available the following spring.

He suggested municipalities with budgetary issues that might ordinarily quick-fix goalmouth and worn centre areas of a sports field, wait a year and renovate the entire field through fraze mowing.

Schiedel cautioned, however, that fraze mowing must be part of a master rejuvenation plan, and that doing it on its own with nothing else will not solve most field challenges.