It’s the No. 1 disease golf superintendents face each year. 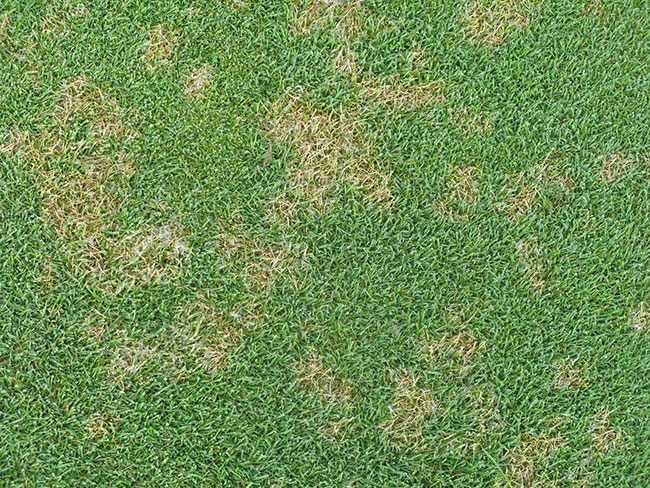 Dollar spot is not reproduced by spores, but by the mycelium that “wakes up” in the spring.

Dollar spot is the No. 1 disease golf superintendents fight each year, and it’s important to be able to correctly identify it so that the proper control methods can be undertaken, superintendents attending BrettYoung Seeds Limited’s winter turf academy were told in March.

Rick Fletcher, technical sales manager at Nufarm America Inc., spoke about new technologies for managing dollar spot for turfgrass during an academy stop at Willow Ridge Golf & Country Club in Blenheim, Ont. It was one of a number of Ontario golf courses to host the event.

Nufarm, based in Australia, serves five different markets, including turf and ornamental. The company recently introduced to the Canadian market a newly registered fungicide called Pinpoint that has both preventative and curatives properties and is marketed in Canada by Winnipeg-based BrettYoung. See page 45 for more information about the product.

Fletcher said there are subtle changes in dollar spot from zone to zone, from green to fairway and from season to season. Early in the morning, it resembles pink snow mould and pythium as all three are characterized by their fuzzy, white appearance. With dollar spot, it is the mycelium that is visible.

What is important to understand, he said, is that dollar spot is not reproduced by spores, but by the mycelium that “wakes up” in the spring and goes to another plant to eat. In the fall it become active, moves to another plant to eat, producing more mycelium. The dollar spot comes from growing as mycelium. It overwinters as mycelium, builds a number of infection sites, and then events begin to occur in the spring.

“Why should the disease go crazy when it can’t get food?”

The mycelium likes moisture in the morning, including dew and relative humidity. Fletcher said it likes to “grab and spread” to the source of water. Knocking the dew back can help reduce the spread. Some golf courses choose to drag PVC pipe or hoses over the turf to knock dew back.

During times of low soil moisture and low nitrogen fertility, the plant stresses out.

Dollar spot is not reproduced by spores, but by the mycelium that “wakes up” in the spring.

Watch for spraying patterns
When spraying for dollar spot, caring for the sprayer nozzle is important. Whether the nozzle is fabricated from brass, plastic, stainless or ceramic, spray patterns tend to change when solid material passes through it. Fletcher said it is imperative that chemical is left on the leaves since dollar spot is a foliar disease. Because the mycelium goes from one plant to another, it is critical it touches as much chemical as possible.

Canadian superintendents have fewer tools available to fight dollar spot than their American counterparts. The disease’s resistance to fungicides is always an issue in the case of dollar spot. Fletcher said there will soon be proof to demonstrate there is resistance to SDHIs (succinate dehydrogenase inhibitors) in managing dollar spot.

He said if a chemical program isn’t working as well as expected, it could be because the same treatment is being used too many times. He suggested superintendents look at the products in their spray programs and note the FRAC (Fungicide Resistance Action Committee) numbers of each before asking:

Do I have the same number in the same tank at the same time?

Do I have the same number in sequence one after another in my application program?

If the dollar spot organism is exposed to the same treatment over and over again, three things are bound to happen, Fletcher said. The target is hit and it dies; the target is missed, the organism is still there and hasn’t changed; and the target got wet, but nothing has happened because it has changed.

The targets that were missed and those that are changing continue to survive and begin to share information that leads to breeding new tolerance within the population. The way to fix that is to rotate chemicals, Fletcher said.

He said what is known about rotation versus tank mixing science is that rotation will slow down resistance, even if it’s not the best approach. Tank mixing with multiple modes of action at the same time is better at slowing down resistance versus rotation, he added.

Fletcher suggested superintendents who are not getting the same control they realized two years ago should look at their program. Although they may be rotating or tank mixing their products, they may not really be rotating or mixing their modes of action. The only way to tell is by looking at their FRAC codes and identifying them.

“Tank mixing is far better at stopping resistance versus rotation, but rotation is better than doing nothing.”

The newly registered Pinpoint fungicide will likely be a good rotational product because it has a different mode of action, he said. It’s a product he’s been working on since 2006, and about 10 years of data have been accumulated.

Also speaking at the academy were Todd Scott of Redox Chemicals and Rob Field, whose Plant Science Inc. business was acquired last year by BrettYoung.

Scott, a former golf superintendent in St. Louis, Mo., spoke about the attributes of Redox, which is a carbon-based fertilizer. Three of the most important nutrients necessary to a living and growing environment are oxygen, hydrogen and carbon. Mother Nature readily supplies oxygen and hydrogen in quantities of her choosing, but superintendents have control over carbon amounts.

He said nutritional imbalances probably cause more headaches than anything from a disease standpoint.

Field spoke about products available from Bayer Environmental Science that are effective in managing turf diseases.