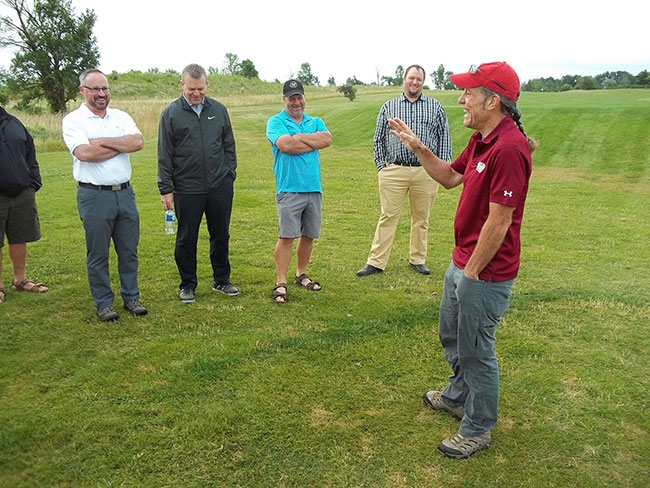 Dollar spot is typically the No. 1 disease facing golf course superintendents each year, and it’s one that was misunderstood for decades. “For about 30 years, folks were trying to figure out what this fungus was,” Richard Buckley, director of the plant diagnostics lab at Rutgers University in New Jersey, said in July.

“And now in the modern era, with all the genetic mapping, they can make family trees, and what they found is it’s not sclerotinia like we used to think and there’s more than one variant of the fungus in the group,” he said. “The point is everyone’s dollar spot is going to be slightly different genetically so it’s going to respond slightly different to the treatments.”

Buckley shared his remarks with a group of about 20 golf superintendents attending the final leg of a four-stop turf academy series at London, Ont.’s Westminster Trails Golf Club. Sponsored by BrettYoung, the turf academy also made visits during the same week to the Camelot Golf Club in Ottawa, the Carrying Place Golf Club in King Township and the Toronto Golf Club in Mississauga.

Buckley said it was Michigan State University pathologist Dr. Joe Vargas who first observed that dollar spot wasn’t a sclerotinia, adding dollar spot is said to be a low nitrogen disease and that increasing nitrogen inputs “is always a good thing to do. That’s a good place to start.”

Dollar spot is a moisture-driven disease. Its mycelium likes morning moisture, making dew removal imperative. Dew can be removed through such measures as dragging a hose atop turf or by mowing.

“No matter what you do, if you knock the dew down you get less dollar spot. It’s a clear advantage.”

Buckley said Ohio State University’s Dr. Karl Danneberger suggests knocking dew back twice daily, by perhaps mowing and then rolling when it reforms. Tackling it twice is more labour intensive, but it helps, he said.

“The more you roll in the morning, the better it is.”

The practice will be dictated by budget parameters, but knocking dew down any way possible is effective, Buckley said.

“There’s a documented science behind it.”

Questioning whether IPM (integrated pest management) can be practised with dollar spot, Buckley said if dollar spot is permitted to start in New Jersey, “the whole thing will be pock marked in a couple of days, no matter what you do.” The question then is, “Where is the threshold for the amount of damage you can take before you have to spray?”

With older grasses, spray applications must be made quickly once the spots are apparent, he said. With newer varieties, on the other hand, they can be allowed to come in “and be nipped in the bud” because the genetic resistance is there. In trials, the threshold base observation is used as well as a growing degree-day model to decide when spraying should be done for the first time. It has been suggested that a dollar spot program get underway following the season’s second true cut.

“We think that’s not a good piece of advice and that you’re starting too early.”

Following the degree-day models, research shows it can be the middle of May before any indication of the disease can be seen.

In New Jersey, if the first spray application is made at the start of the second true cut, about 10 applications will have to be made in a single season. Buckley said that by waiting for the growing degree-day, one or two applications could be avoided. If the Smith-Kerns dollar spot probability model from the University of Wisconsin is adopted, a couple more spray applications can be eliminated. If a more resistant turfgrass variety from a new seed type is also used, the number of spray applications required in a season can perhaps be pared down to one or two.

“The key is resistance management.”

He said consistent spraying of Banner, for example, would ultimately result in it not working.

“It’s probably not a good idea to use the same product repeatedly.”

Dollar spot has built up a resistance to virtually every product aimed at dollar spot control, Buckley said.

“You keep putting pressure on it with any specific chemical, then you’re going to have some sort of issue. You can mitigate that by rotating and tank mixing (with other products such as Daconil).”

Chlorothalonil, the active ingredient in Daconil, has never reported resistance issues, but the fungicide will soon be lost to the market even though it is sprayed on almost anything a human being eats, Buckley said.

“It’s the most widely used fungicide in the world.”

Another type of contact material will have to be found to replace it, he added.

“The more rotation you get, the better off you’re going to be. Dollar spot is the one we’re most worried about.”

If a spring outbreak can be nipped, the peak in the fall is smaller but is worse when there is more dew in the canopy, Buckley said.

“More than anything else, that’s what’s driving it.”

Buckley said he doesn’t recommend superintendents use up older, discontinued chemistries because they’re never coming back. Superintendents can choose to go off Banner for a couple of years and then bring it back.

“It’s easier to use it sparingly and mix it up than to burn something and never be able to use it again.”

A superintendent in attendance asked Buckley whose advice should be heeded when one researcher suggests one thing while someone else might post a message on Twitter suggesting something else entirely. Buckley said advice posted on Twitter should be taken with “a grain of salt,” noting that solid data is derived over a period of years.

Anthracnose control
Figuring out how to control anthracnose took about 10 years of research, he said, adding any graduate student requires at least three years of data before his findings get into a peer-reviewed journal. Reputable results are required. If researchers at Michigan State, the University of Kentucky and Rutgers are all “singing the same song,” that is when one can begin to feel comfortable about what is being said.

Anthracnose, Buckley said, was originally thought to be a stress-induced disease. Fungicides control it “pretty well,” and almost every chemical class has some efficacy for anthracnose control. He added that three pounds of nitrogen is required on poa annua greens to keep the disease from coming in.

“Three is a critical number.”

He said research has changed over the years to suggest that one pound of granular fertilizer be put down in the spring and then the three-pound application be completed by spoon feeding throughout the remainder of the season. He said it was found the spring application improved the turf quality better than a fall catch-up.

The pH floor for annual bluegrass is five.

“You’ve got to be above five or it’s going to start to thin and yellow and get anthracnose.”

Light, frequent topdressing and raising the height of cut helps with anthracnose control, Buckley said, adding that if a golf course has problems with chronic anthracnose, fungicide applications should begin about mid-May in 14-day intervals throughout the season.

“If you’re coming out of the winter and you’ve got yellow spots, you’re going to have a big problem in the middle of the summer.”

Moving onto another area of the golf course at Westminster Trails during the walkabout tour, Buckley addressed the merits of aeration, liking both coring and the use of solid tines. Any technique used on sand is good, he added. Employing different techniques and different depths are beneficial.

Core a couple of times a year and then use solid tines, he recommended.

Buckley said he has been accused of being a “corporate shill” by garden club members because of his support for pesticides, but he responded by taking photographs of the ingredient labels of such commonly-used products as athlete’s foot medication and yeast infection remedies to demonstrate to his critics that the same chemicals used in those treatments are also used on plants. He suggested to them that they’ll use a particular chemical on their bodies to treat an ailment, but won’t eat an apple sprayed with the same chemical.

He said using such an approach to respond to the public who might give “blowback” about chemical use is an effective way to let them think more carefully about pesticide use. He added the public might also wish to know that the same chemistry used to treat heartworm in dogs is injected into ash trees to help stave off the destruction caused by the emerald ash borer.