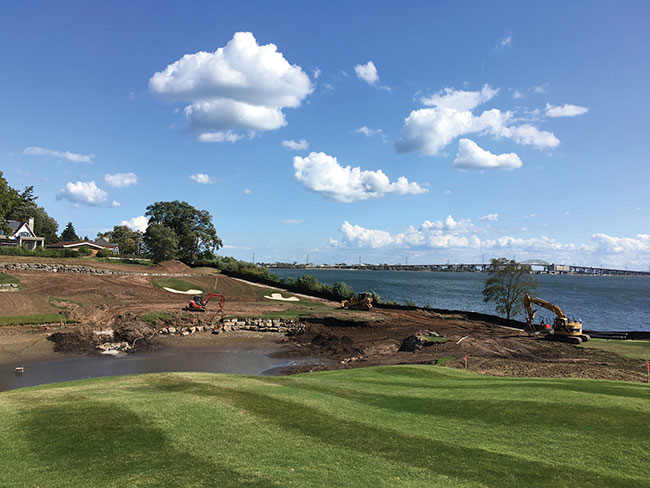 The 17th hole at the Burlington Golf & Country Club was reconstructed while the adjacent irrigation pond was relocated. Photo courtesy of Dean Baker

Between poor weather in the late stages of 2019 and the beginning of the COVID-19 pandemic in early 2020, a major renovation project at the Burlington Golf & Country Club was hit with a formidable one-two punch. But the resilience of all parties involved – in spite of the setbacks – led to both the project’s eventual completion and its success.

Dean Baker, superintendent for the past seven years at the Stanley Thompson-designed private course along Ontario’s Golden Horseshoe, shared the story of the project’s trials and tribulations via an online presentation in January to members of the University of Guelph’s Turf Club. The work marked the completion of a long-range plan that was devised in 2006 between the club and architect Doug Carrick. Specifically, the project entailed the installation of a new irrigation system along with the reconstruction of three holes, the building of a few new tees and some bunker work.

“As a small, good walking Stanley Thompson golf course that was built a long time ago (in 1922), it was never built for the amount of rounds that we do now, which is on average about 35,000 a year,” Baker said.

Greens are the first thing on a golf course to suffer from wear, he said, adding that by expanding those deemed most prone to continued diminishment, they could better withstand the increased amount of traffic. Consequently, the fifth, sixth and 17th holes were redone.

Work began in earnest in 2019, but poor weather in November and December stalled the project until the spring of 2020. The unexpected arrival of the COVID-19 pandemic in March, however, threw a second wrench into the works, and resumption of the project was delayed yet again due to provincially-mandated work stoppages. The unanticipated delays set completion of the project back by about six weeks. Prior to the declaration of the pandemic, it was suspected the project was only about four weeks behind schedule.

The reconstruction of the 17th hole located next to the Bay of Hamilton involved the relocation of an adjacent irrigation pond. Not only was the entire fifth hole renovated with the repositioning of its green, its tees underwent significant work, and the entire par three sixth hole was redone. Tee work was also done at the seventh hole, and the club’s driving range complex underwent some modifications.

The club hired FlightLine Golf as its contractor for the renovation work. Baker said he had previously worked alongside the company when he was superintendent at Oakville’s Glen Abbey Golf Club and praised FlightLine president Spencer Adams for his keen attention to detail.

All three of the new greens were built to USGA specifications.

Sodding after polar vortex
Burlington’s greens had previously been sodded to bentgrass following the winter of 2014-15. A polar vortex system that year left the greens encased in ice for a prolonged period of time, killing the former poa annua surfaces. The new bentgrass greens were ready for play 10 weeks after sodding during the 2015 season. With that experience still fresh in his mind, Baker said he felt confident that another sodding project would see the new greens ready to play within the same time frame.

Before choosing to sod, however, the club’s membership was presented with the cheaper option of seeding the new greens.

“They didn’t even blink an eye,” Baker said when the club chose the more expensive option of sodding.

But with COVID-19 pushing back the construction time line, it meant most of the sodding work had to wait until June and July – a time of year most superintendents wish to avoid for laying sod. Adding to the challenge of sodding at that time was the extreme heat experienced last summer, with 41 days topping the 30-degree Celsius mark and with scarcely any precipitation. In spite of the heat, drought and high amount of traffic during the summer, the situation presented a silver lining.

Baker said the lack of soft and muddy conditions allowed the sod to go down quicker, and the newly installed irrigation system provided the right amount of coverage. As the project progressed, the new greens started to present themselves as “eye candy” to Burlington’s members, who were anxious for the green light to begin playing on them.

“It was so nice to see green grass as opposed to dirt,” Baker said.

More than 700 skids of sod were laid to complete the renovated holes. He said the new irrigation system proved to be a “savior” during the extreme summer heat, yet a few areas managed to be missed.

Knowing that the club wishes to eventually redo all of its bunkers, he said the project gave him the opportunity to test some liner possibilities for the bunkers that were part of the renovated holes. He opted for a matting-type material, and some of the cavities were filled with Pro/Angle sand.

The club replaced its 30-year-old Toro irrigation system with a more modern Toro product under the supervision of consultant Gary Taylor of GT Irrigation Services. With no interruption of golf, the installation of the new irrigation system gave members a chance to see the work being done.

“Members aren’t used to seeing construction, and when they see this they wonder how long it’s going to take to clean up, but the next day you come back and this eight-inch mainline has disappeared and everything’s clean. The system so far has been running beautifully.”

Baker said it was a good learning experience for the club’s members, who witnessed how quickly things can get done with both the irrigation installation and construction. After only five or six weeks, it was hard to tell that work crews had been at the golf course, he said.

Moving the irrigation pond at the 17th hole meant having to drain it prior to renovating its intake, and Baker wanted to participate in the task in a hands-on manner. With the pond empty, the club temporarily pumped water from the adjacent bay, but the effort proved futile as a result of continuous clogging. Assistant superintendent Ryan Maragoni spent much of his time standing in the water while keeping the screen clean.

“He might as well have put a bunk down there,” Baker quipped.

The “bad,” he said, was more of a challenge than anything else. When work was paused due to poor weather in late 2019, the thought of a spring health crisis was the furthest from anyone’s mind. COVID-19 not only pushed construction further back, it delayed the golf course’s spring opening by a full month. But golfers returned in droves by the middle of May.

“We set records, even opening a month late, on the amount of rounds we did.”

Baker cited the “ugly” part of the project as its impact on his staff.

“Trying to go through this every day was a challenge in itself,” he said, noting he was haunted by his own “witching hour” between 4 a.m. and 6 a.m. when he found it difficult to fall back asleep. There were times he didn’t want to get out of bed to face the day, but having a solid support team behind him – starting with his wife, who offered continuous encouragement – convinced him he could successfully complete the project.

“When you’re going through it, it’s extremely hard, but the good thing is once you get through it you can put a smile back on your face and say, ‘We made it.’”

The “good” aspect of the project was that Baker, his staff and contractors completed the project “with flying colours,” much to the satisfaction of Burlington’s members.

“We got through this successfully because we had a plan from the get-go which we stuck to.”

Baker praised Carrick for his vision of the finished product. With the aid of computer-generated flyover photography, members could see what the golf course was going to look like before the first shovel went into the ground.

“That was a huge asset.”

Baker and Taylor are both well experienced in the field of irrigation and knew where every sprinkler was going to go. The contractor was also picked a year in advance of the project. Having lost his three senior managers to other opportunities a year before the project’s start, Baker had little time to build a new team. But he applauded his staff’s efforts and noted the success of the project was largely due to everyone’s resilience.

“One of the biggest things that help us in this and why resilience comes to us every day is called Mother Nature, or the weather.”

Dealing with Mother Nature can be unpredictable at the best of times, but she is the main reason why golf course maintenance workers are naturally resilient, he said.

“That gives us more strength to deal with all kinds of challenges. We keep on kicking along, even when times get rough.”