Each irrigation system is different and may require adjustments 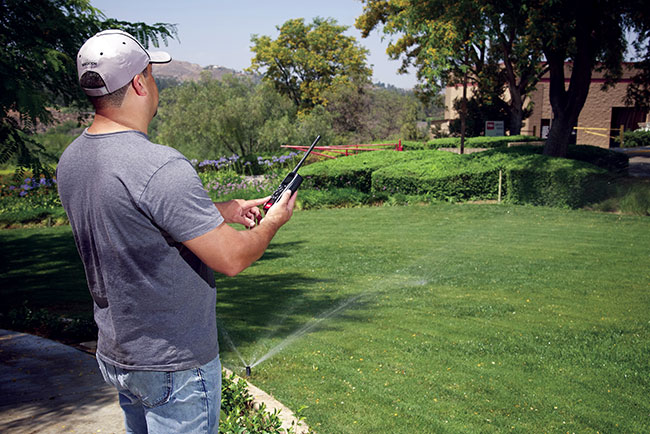 During the cold, winter months, many customers turn their irrigation systems off, resulting in dry, dull turf. With spring underway, customers are eager to see their landscapes return to those luscious, healthy playing surfaces. It’s time to turn on those irrigation systems and sprinklers so that we can once again see that healthy springtime turf.

In general, after three or more days with the temperature below freezing (32˚F / 0˚C), it’s time to winterize. Then, after the dormant winter and once it starts getting warmer around springtime, it’s time to start up the irrigation systems again.

Winterizing is key
The first step in successfully starting up irrigation systems happens long before connecting the water source to the system in the spring. Depending on the irrigation system’s location, winterizing the system in the fall is essential to a successful start-up in the spring. If the fall winterization procedures were completed correctly, then springtime start-up will also go smoothly.

A successful winterization process includes ensuring that there’s no damage to the electrical components, draining all of the water from the system, and actuating or manually bleeding the water from anything connected to the source, including valves, solenoids, breakers, or actuators.

Fall winterization helps the irrigation system’s integrity once it’s started up again, and it allows grounds crews to manage their workloads effectively. With all the springtime tasks that crews have on their plates — such as controlling weeds, seeding, dethatching, removing winter debris and fertilizing — grounds crews will have a little less to worry about knowing that the irrigation system is in good condition after a successful fall winterization procedure.

Springtime irrigation
After the winterization process is complete and grounds managers are confident that their system is ready to be activated again in the spring, it’s essential to communicate the start-up process with the rest of the grounds crew.

Vent the piping system
This step is easy, especially if grounds managers completed a successful winterization process in the fall. Venting the piping system ensures that the system is clear of debris and then successfully opens the system’s drain valves. Technicians should, however, manually turn on the sprinklers and insert quick coupler keys in QCVs. This allows the system to be open when you start to fill. Grounds crews should also bleed air from the lines while filling the system and avoid compressing air.

Fill the piping system
Starting closest to the source, have the crew monitor open drains, sprinklers, and quick couplers. Once a steady flow is detected, the crew can then close low-elevation drains and quick couplers, turn sprinklers off, and move to the next highest location.

Technicians can then repeat this process until the air is completely evacuated and all venting locations have been closed. However, it’s important to remember that the slower the system is filled, the safer it will be.

Activate each sprinkler electronically
Confirm that there is a maximum pressure of less than 50 psi, then turn on sprinklers electrically one by one or zone by zone to allow any remaining air to escape. During this phase, technicians will want to identify any system component issues and make repairs, as necessary.

Confirm all air has been removedOnce
Once this is complete, adjust the system pressure to the normal operating pressure.

Key steps to consider when pressurizing
There are several key aspects that technicians should look out for before starting up an irrigation system for the spring. The system has been put under a lot of pressure after lying dormant for several months in the winter. Therefore, technicians need to take proper care of the system and inspect the sprinkler heads for any cracks or abnormalities before starting up the system in the spring.

If a damaged head is overlooked, pressuring it can cause the head to disconnect from the irrigation system with immense force, which can potentially cause harm to the system itself, and more importantly, to the grounds crew and technicians. To avoid this dangerous situation, the technicians can ensure that the team members are at a safe distance from the heads to avoid any potential injury. Using personal protective equipment (PPE), such as gloves or safety glasses, is also highly recommended during this process. Keep in mind that any time an object is pressurized over 35 psi, it can potentially cause injury, so team members should keep a safe distance while working on the system.

Technicians should also remain vigilant of their surroundings and pay close attention to the irrigation system during every step of the process. Whether the operation’s irrigation system is supplied by a municipal water source or from surface or groundwater through a pumping system, listening carefully proves to be extremely important.

During the entire pressurization process, a team member should continuously monitor the pump’s functionality and be ready to communicate any abnormalities or odd sounds to the rest of the team.

Developing a comprehensive springtime start-up plan, communicating the plan with the grounds crew, and ensuring the process is safe for everyone from start to finish, will ensure that springtime irrigation system start-up will be successful and seamless every time.

Chris Davey is a product marketing manager at Toro.