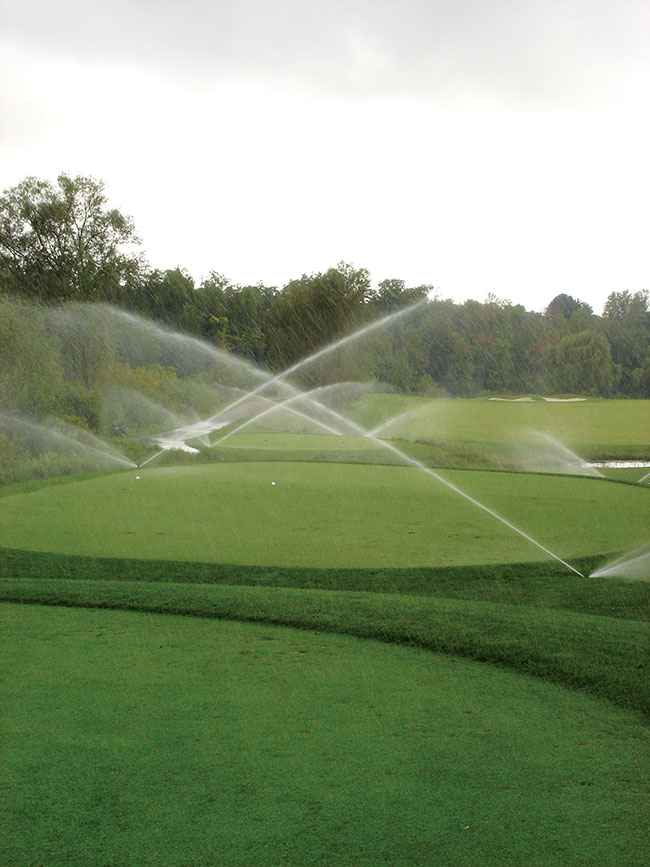 An irrigation system that hasn’t been prepared for falling temperatures is at risk of damage from ice expanding in the components. Winterizing, sometimes called decommissioning, involves a few quick steps before winter’s arrival that will help you avoid a lot of lost time (and money) later.

When to winterize depends on your location and how you use your system. If you’re in an area warm enough that you continue to irrigate during the fall or winter months, winterizing may not be needed. In general, once you have three or more days with the temperature below freezing (32 degrees Fahrenheit or zero degrees Celsius), it’s time.

The ABCs of winterizing
Regardless of your location or the type of property you maintain, all it takes is some quick upfront work to protect the system and increase its service life.

A. Begin by turning off the water and electricity. Before you take any winterizing action, it’s essential to make sure there’s no source pressure in the system and that the electrical supply to the pump or other components is turned off. This protects you and also protects the system by ensuring that it can’t accidentally get turned on during the winter months.

Suppose you have a water feature that runs year-round or an automatic system with valve controls to actuate. In that case, you can maintain the flow of electricity by connecting the wires from the controller. You can also actuate solenoids individually by using a commercial handheld actuator.

B. Drain the system. With the power and water supplies now off, it’s time to remove the water from the system so that it can’t freeze and cause damage. Your system likely already has drain valves installed at the lowest point of every lateral, but, if not, plastic or brass drain valves are affordable and simple to install. Glue in a T and thread it so that it’s upside down for draining into six to eight inches of gravel. Gravity is your friend and will drain the system, though it’s a good idea to use a pressure source such as an air compressor to ensure the water is purged.

C. Make sure valves and solenoids are drained.Don’t stop at only draining the pipes. While the system doesn’t need to be bone dry, most manufacturers recommend actuating or manually bleeding anything connected to the source. It’s common for water to get trapped in solenoid ports and in the valve above the diaphragm. If that water freezes, it’s likely that the rubber tip on the plunger will be damaged. Drain all valves, solenoids, atmospheric or pressure vacuum breakers, and reduced pressure actuators.

Go easy when using pressure
There are certain actions to take if you’re using a pneumatic pressure source to empty out your system. First, to prevent moving the water too quickly and damaging components, keep the air pressure below 50 psi. Your goal isn’t only to remove the water, but also to protect the system. By slowly displacing water, you reduce the risk of a trapped water pocket breaking loose and distressing or breaking pipes, fittings, sprinklers and valves.

How long to allow
Obviously, the larger your property, the longer winterizing will take. The rule of thumb is that larger sports fields six or four-inch mains and three-inch laterals (or golf courses with a six, eight or 10-head fairway system) can take several hours per zone to complete all the steps and check the heads. As you scale up, keep a four-to-one ratio in mind. In other words, if the pipes are twice as big and the heads are twice as big, it’s going to take four times longer.

Open all drains at the low points and vent the high points to maximize airflow. If you’re working with compressed air, attach the compressor to the highest point possible so that you work from the top down. Ideally, drain the system over several days using the compressed air at short intervals and then pause to let gravity do the work. Continue working from high points to low points until the expelled air looks clear.

Fall is ideal for maintenance, too
It might seem logical to think about springtime for maintenance, but, actually, maintenance is often overlooked or shortchanged because it’s such a busy time for sports venues. At many facilities, activities slow during the fall, making it an ideal time for maintenance. Plus, throughout a typical season change, the ground is likely to freeze, thaw and refreeze several times, which can put rubber components such as O-rings under considerable stress if they aren’t lubricated

With your system decommissioned and drained, it’s a great time to disassemble and clean large commercial sprinklers and nozzles. Check for debris at the end of the line, especially if pressurized air was used to drain the system. Toro also recommends that you lubricate O-rings and other components before reassembly.

Winterizing is good business
A little winterization time spent in the fall will save you a lot of time in the spring – and it could also save you a lot of hassle. If you don’t drain the system and it freezes, you risk damage to delicate parts like valves, diaphragms and pressure vacuum breakers. In the worst-case scenario, you could end up having to dig and replace the lines and sprinklers.

Save money and save headaches. Winterize your system each year.

Chris Davey is product marketing manager at Toro. He also co-hosts a radio show called The Water Zone, sponsored by Toro, which is broadcast on Thursdays at 6 p.m. on iHeart radio and throughout Southern California on NBC News Radio stations. The podcast is available on iTunes.