Features Agronomy
Xeriscaping: creating an attractive yard with little or no reliance on water 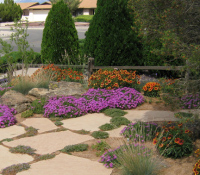 WITH water becoming increasingly more expensive to buy and turfgrass lawns suffering drought-induced setbacks, more and more people are turning to landscape contractors to create xeriscaped yards for them.

Xeriscaping, an environmental design of land to minimize water use, has been showing up quite a bit of late "on people's radar," said Sean James, owner of Fern Ridge Landscaping in Milton, Ont.

Speaking in January at Landscape Congress in Toronto, he said aesthetic-looking residential and park properties can be created, requiring little maintenance and next to no water.

"We can create beauty with it," he said. "It isn't impossible. You just have to think about the plants you're going to use."

James said nature does a good job on its own, and contractors and their customers can draw on that for inspiration. He said he prefers using native plants, but isn't opposed to using non-native species to create something different.

Anything that can grow in pure sand is likely to be drought-tolerant. Periwinkle, for example, is an ideal, drought-tolerant plant, given the proper establishment process. It's slow to establish, he admitted, but will last a long time.

Surface irrigation is usually required at the outset to get plants established, but "once that's done, you're off to the races."

"Certainly water is an important part of any landscape for establishment and for aesthetics, but there are systems you can use that put water right at the root of the plant. I only look at irrigation as a method of establishment."

Scree gardening is a method of xeriscaping which requires no soil. Scree is the gravel-like material which falls down the side of a mountain and comes in various sizes. The type of gravel used under roads is ideal for ordinary scree gardens. James, who has created a scree garden atop a driveway, said the growing medium for his scree garden at home ranges in depth from about one inch to a foot and a half, but it doesn't need to be particularly thick for plants to grow.

Scree gardens "allow you to tap a whole different palette of plant material." James said it's "uncanny" what Mother Nature can grow that he can't.

Keeping plants shorter and stronger will proof them against such things as a lack of water and nutrients.

"If you're putting something in scree and you're cutting back on that nutrient and water availability, then you're going to make the plant an awful lot stronger and a lot more disease and insect tolerant."

Because plants tend to grow shorter and stronger in scree plantings, powdery mildew will be absent.

"In this age where pesticides are being taken out of the tool box, perhaps this is a good way to go to reduce the use."

Xeriscapes can be home to several different plant varieties, including types of cacti that are Canadian winter hardy.

"Anything that can set your landscape apart is a good thing."

Dwarf conifers and miniature roses are among plant types which can prosper in a xeriscaped setting. James said he doesn't do anything with his roses which don't die back during the winter and bloom all summer. He added some landscapers tend to "baby" certain plants during the season, leading to winter dieback and winter kill.

Little bluestem is a favourite grass of his for sunny environments because of its appearance, its ease of growing, and the fact it needs no water at all once it's established.

"Think long term when you're landscaping. We should be thinking five, 10, 20 years down the line when we're doing things."

A juniper big enough to fill the area, for example, "will fill the yard in no time at all."

James told his audience to think twice before pulling something Mother Nature has planted, recalling how he gave a second thought to pulling a New England astor from his property. He opted to leave it alone and found it offered good winter interest, it complemented the grass, and looked as if it belonged there.

"If you have super, well-draining soil, then thyme is good. If it drains well, it's a beautiful ground cover."

James said thyme also thrives in full sun, but added sun and shade are relative. "If something blooms in deep shade, especially late in the year, I'm happy. Try things out and see how they do."

Drought-tolerant landscapes should not be overirrigated, he warned, because they will suffer if subjected to too much water.

Plants such as yuccas offer spectacular texture, James said. "Xeriscaping can have fabulous texture. It is about the leaves and the foliage colour as well and can make a landscape stand out from the competition."

Trees such as black locust are drought-tolerant and are fast to grow when young, but slow down as they get older. They are native and problem-free.

Barberries work well in xeriscapes, but James warned to be careful where they are planted. Because they are potentially invasive, he suggested they not be planted near a creek.

"Put plants together that you think work well together and you'll learn to have fun with it."

He said contractors should set the expectations of their customers the right way. Some plants may not look like much the first year but, with patience, will look great down the road.

"Your customers aren't stupid. They didn't get financially well off enough to afford us by being stupid. They just may not know, and all they need is some information."

The customer, however, is much better informed than he used to be due to such resources as the Internet and garden clubs, James said.