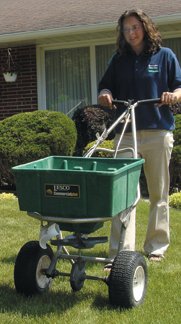 DEVELOPING environmentally-friendly yet profitable programs will be a challenge for lawn care operators and landscape contractors in Ontario now that a province-wide pesticide ban is imminent, but those willing to take that step can continue to offer their customers healthy, pest-free lawns.

Such was the message from Turf Revolution's Tim Cradduck who spoke in January at Landscape Congress in Toronto. His message, entitled "Green unleashed: strategies for the new lawn care industry," offered advice to those wishing to provide their customers with the best available programs yet doing so using a "green tool box."

It all begins with soil testing, he said. The contactor can meet with the customer, going over key points about what is happening with his turf "without getting lost in the science and confusing the customer." Such an approach, he noted, gives the contractor an added level of professionalism.

The key point to note in any soil test, Cradduck said, is the soil's pH level which, if out of whack, will send everything else out of whack. Cation exchange capacity, potassium-to-magnesium ratio, organic matter, soil texture and sodium content are other key points to look at in a soil test.

Turf Revolution uses a third party laboratory which conducts its soils tests using Ontario Ministry of Agriculture, Food and Rural Affairs standards. Testing is done in the form of a mail-in kit, providing the customer with full results in a PDF format within seven to 10 days.

Make sure your spreader is calibrated to the pace of the operator.

Using that soil test as a starting point, a core fertility program can be developed for the customer of four applications of fertilizer for the season. If the customer's soil is particularly sandy, one or two additional applications may be necessary because the nitrogen will be used up much faster. The soil test will indicate how many pounds of nitrogen are needed to be put down over the course of a season. The test will also suggest what correctives are necessary as well as the need for adding organics.

Cradduck said results from a soil test create an opportunity for contractors to "up sell" other programs to their customers.

"You've got an opportunity to sell aeration, overseeding, topdressing, correctives…those are all additional up-sells."

He said if a customer can be sold on four yearly fertilizer applications, he can perhaps also be sold on some up-sells.

It is important to understand the difference between synthetic and organic fertilizers, he said, because the way in which they work will be affected by the climate. Synthetic fertilizers, he noted, feed the plant directly vs. feeding the soil. High in nitrogen as a rule, they promote top growth but not a lot of root growth. Once it becomes hot and dry, the turf has difficulty surviving due to the imbalance between top and root growth.

The reason synthetic fertilizers have become so expensive of late, Cradduck said, is because of the natural gas necessary to make the urea as well as the inflated cost of potash.

Organic fertilizers, by law, contain a minimum of 15 per cent organic matter. The remaining 85 per cent of filler is synthetic fertilizer, in most cases.

"You may have been sold thinking you're buying an organic fertilizer, but the reality is you've bought a synthetic fertilizer with a little bit of chicken manure or something like that tucked in the back end."

Although organic fertilizers have their attributes, they also have their drawbacks which include odour, he said, as they are often derived from animal manures or processed human waste.

Cradduck said Turf Revolution chooses not to use any animal byproducts because of their propensity for odour and their salt content. Instead, the company uses plant/mineral-based fertilizers made from such products as corn, alfalfa and seaweed.

"The nice thing about it is you're feeding a plant back to a plant." Attributes include a low salt index, an excellent slow-release source of nitrogen, phosphorus and potassium, and a balanced source of nutrients.

"The neat thing about organics is there is lots of cool things that go on behind the scenes."

Cradduck said alfalfa, for example, is an ideal nitrogen fertilizer which contains a biostimulant called triacontanal. The biostimulant creates a stronger and healthier grass, more vigorous tillering, and a healthier and stronger cell wall.

Kelp also contains a biostimulant which produces significant root growth and doesn't cause the plant to stretch, yet keeps it solid, strong and healthy. It also helps with seed germination and drought tolerance.

Polymer-coated urea fertilizers offer a truer form of release among synthetics, Cradduck said, but they are difficult to find anymore due to increased shipments to China. He said if they can be found, they will be expensive.

"The nice thing about organics is they're totally natural slow-release fertilizers, so you'll get four to eight weeks of steady, slow feed out of an organic fertilizer."

He added organics don't produce the same amount of top growth that synthetics do, which means a company that removes its clippings will be less burdened. It also helps to ensure that only the top third of the blade is cut when mowing regularly.

"Ideally, we want to have a fertilizer that's balanced, meaning the first and last number (nitrogen and potassium) are close to being the same."

A balanced organic fertilizer will promote both top and root growth, he said.

Whenever weeds are present in a lawn, it tends to be a sign of other issues, including a pH level which isn't optimum, salt presence, compaction, low nitrogen levels, and nutrients tied up in the soil.

At Turf Revolution, a product called Salt Stopper is used to neutralize the salt content in soil, allowing it to be flushed out so that grass can grow. Cradduck said last winter's salt usage in his driveway damaged the turf on either side of the pavement. By using the Salt Stopper product, he was able to restore a lush, healthy lawn in those areas within three weeks.

The product is also helpful in preventing dog patch damage. Since it is the salt content in dog urine which causes the most damage, customers owning dogs can be up-sold on a Salt Stopper program, he said. Three applications in the spring, summer and fall of eight pounds per 1,000 square feet will stave off the problem.

"Once the salt levels go down, it actually releases nitrates back into the soil. It's also a great clay buster which helps to reduce compaction.

"Your core fertility program will be the key thing in your tool box," Cradduck said, recommending at least five pounds of nitrogen per 1,000 square feet for each of the four yearly applications. If the soil is sandy, six pounds may be required.

"The trick is, don't cheap out on this. This is where guys make a fatal error with their lawn care programs if they don't calibrate their fertilizer spreaders properly."

He said the walking speed of the applicator must be taken into account so that the spreader can be adjusted according to the individual. Taller people with longer strides will cover more ground in a shorter period of time than someone shorter.

The core fertility program is a big key toward crowding out weeds, but adding organic matter into the soil is also important. Microbes need to be replenished in the soil which can be accomplished by using organic fertilizers, retaining grass clippings and using compost.

When overseeding, certified seed blends should be used, Cradduck said.

"When you go shopping for seed, you'll have to pay a little more for a certified blend."

The bag tag will indicate the exact percentage of the type of seed it is as well as the seed variety. Seed should be selected according to its growing conditions, he added, suggesting full sun or predominant shade will dictate what is needed.

Seed type can combat potential damage from such pests as chinch bugs, billbugs and sod webworm. Ryegrass and creeping red fescue, for example, contain endophytes which upset the pests' stomachs, prompting them to stop feeding, dehydrate and die.

Cradduck recommended maintaining a mowing height of between 21/2 and three inches and leaving behind the clippings which add about a pound of nitrogen to the soil during the course of a season.

Water should be used judiciously, he suggested.

"If we've got an irrigation system set up and it's coming on every single day and it's splashing water on the lawn 20 minutes every day, the roots don't have to go down anywhere. They can stay right there. You want to make sure you've got a deeper root zone."

The customer needs to water less often, but for a longer period of time, he said, suggesting an inch of water per week on average is ideal.

Aerating should ideally be done in both the spring and fall. "If you can aerate twice a year, you're off to the races. If you can encourage your customers to aerate more than that, even better."

The idea behind aerating is to reduce compaction and increase the root zone. "We're root pruning the grass and it sends out more rhizomes which produces a bigger, thicker lawn and enables the water and nutrients down into the root zone."

Topdressing will increase organic matter in the soil. The more organic matter, the higher the turf's drought tolerance will be. Ideally, topdressing should be done in conjunction with aerating, Cradduck said.

If the right kind of compost is used, it should be free of weed seeds. Certified compost, or CQA, is weed-free. At the centre of the compost pile, the temperature is taken up to about 60 degrees Celsius so that any weed seeds or pathogens that may have existed are dead. The microbes, however, are still there digesting everything.

Turf Revolution uses a spreader-friendly compost product called Time Sav'R Topdressing which can be put down by a broadcast or drop spreader in a quick application. A 3,000-square-foot lawn can be done in 15 minutes. A soccer field can be done in 45 minutes using a broadcast spreader.

"Not all compost is created equal," Cradduck said, explaining that anaerobic compost-that without oxygen-is created inside a vessel. When taken out and exposed to oxygen, the microbes die and it tends to have a high salt index.

He suggested aerobic compost be used, which is produced with oxygen and material derived from leaf and yard trimmings.

"Don't get stuff with a high salt index to it because you'll pay for it in the end when you have to redo the lawn."

Cradduck said the Time Sav'R product is pelletized, spreader-friendly, derived from CQA compost, is composted from leaf and yard trimmings, and makes for a fast and easy application.