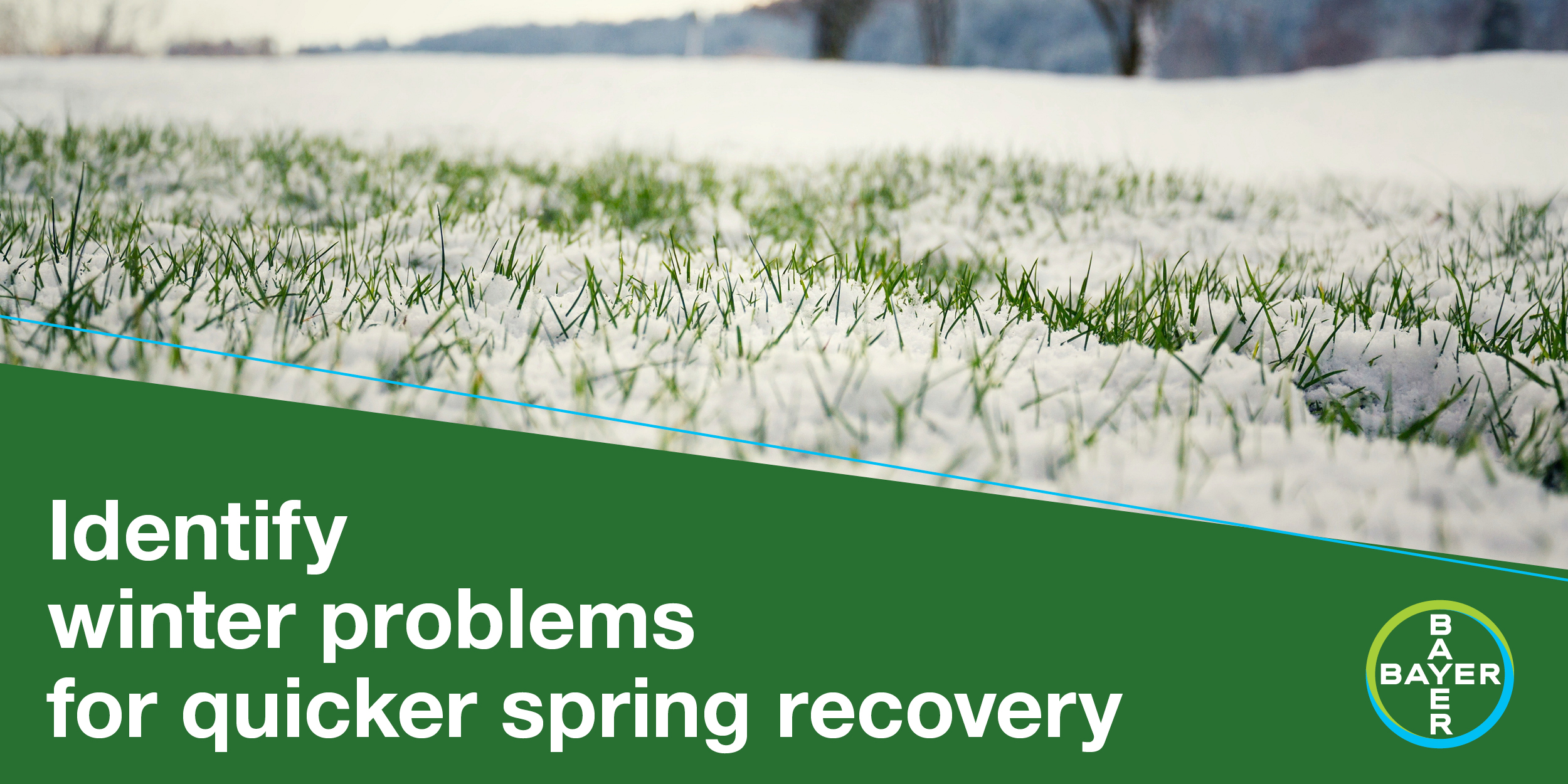 Winter isn’t kind to greens. But those warm, hopeful first days of spring can be even worse.

In late winter and early spring, social media fills with questions and opinions as we watch snow drifts melt and temperatures go up and down like a yo-yo. Should I blow the snow off the greens? Did I make a mistake covering the greens before winter? Is the ice bad enough that my greens are shot and I’ll have to replant?

The length of time turf is covered by ice and snow determines the extent of winter injury. “Winter kill” is a term used to describe the injury caused to turf by a few different problems. In Canada, our main enemies are ice suffocation, crown hydration, and snow moulds.

A thick layer of ice can starve turf of oxygen and trap harmful gases. Ice suffocation is worse under a thick layer of ice, and two to three inches of ice is a recipe for problems. Ice that is clear, instead of cloudy, likely has less oxygen which will lead to more damage.

The jury is out on whether busting up ice is the solution. It might release gases and allow oxygen underneath but sometimes the turf under the ice is having enough trouble. Opening up the ground to the freeze-thaw action in early spring could make things worse.

Some golf superintendents choose to reduce the collar ridge around the outside of greens so water can drain off quickly. But that solution won’t help if you’re staring at a skating rink this spring. Changing drainage is a warm-weather project.

In the spring, solving ice damage to turf takes a combination of quick action and patience. Move fast to identify issues once the ground is clear. Start a fertility program that includes a slow-release nitrogen source. This will limit a rapid flush of top growth and allow for a more balanced use of photosynthetic reserves within the plant. In some places, resurfacing putting greens with sod or re-establishing with seed may be necessary.

Another way to speed recovery is to incorporate a proven plant health product like Signature XTRA Stressgard into your spring program. Research has shown Signature’s unique Stressgard Formulation Technology and fully systemic mode of action delivers numerous plant health benefits that stimulate the plant’s defence mechanisms and help it fight through stress.

Crown hydration is the most common abiotic (physical rather than biological) winter injury. It happens when there is a warm spell and the plants start to metabolize. The plant just starts to green up when suddenly, with no snow cover for protection, temperatures plunge. Injury is most notable in annual bluegrass and perennial ryegrass. The crowns become hydrated but a rapid freeze causes ice to form and the cell membranes to burst.

Crown hydration is most likely where water is trapped either because of physical depressions or because the area is poorly drained. The water has nowhere to run off and the turf becomes super-hydrated and dies with plunging temperatures. Unfortunately, there’s not much you can do to prevent crown hydration other than improving drainage.

If you’re in a situation where you need to replant turf, Dedicate® Stressgard® will help protect the new turf by providing more plant vigour. It promotes more robust rooting and the turf will be healthier.

Once you’ve reached 200 growing degree days, the new seedlings will be mature and you can switch to Signature XTRA Stressgard. That will help the growth of bentgrasses. Use Banol® to prevent dampening off. You must wait until there is over 90 per cent recovery in the turf stand before using a plant growth regulator.

Of all winter injuries, snow moulds are actually the most manageable. Diseases like microdochium patch can develop in the absence of snow cover. Other snow moulds (grey snow mould and speckled snow mould) rely on deep continuous snow cover for infection. These snow moulds get progressively more severe during prolonged snow cover (more than 100 days).

Most high rates of fungicide treatments in the fall can provide acceptable control of snow mould for greater than 100 days. More than that and results may be variable.

If you see microdochium patch at the end of March and early April, you may have to pull the trigger on a cleanup or preventive fungicide application earlier than you’d planned. Once it catches hold it can be difficult to get rid of microdochium patch, and it can take a long time for the turf to grow out of disease. Often the turf won’t heal until later in May.