IRRIGATION is part of the solution to achieving healthy turf, and knowing how to properly manage an irrigation system is a vital part of realizing that end goal, an audience of sports turf managers were told in the fall. 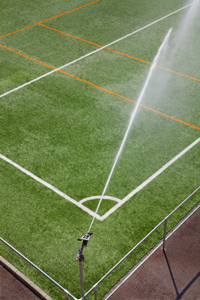 In his address, Taylor drew attention to the various components of an irrigation system, explaining how they work, their function and how they can be managed.

Sprinkler heads are the most visible part of an irrigation system. When working properly, they are to pop up, rotate, apply water, and retract when finished. Gear-driven sprinklers provide constant speed of rotation and proper application of water. They are available in stainless steel or non-stainless steel construction, but Taylor said, although the stainless steel units cost more, they are worth the additional cost if topdressing is part of the field maintenance regimen.

Under the ground is a swing joint which connects the sprinkler to the pipe, providing a flexible “elbow.”

Electric valves are the station which control a group of sprinkler heads. The valve opens when “energized” or is turned on. Water flows through the valve which closes when de-energized. Taylor said the principle is called “hydraulic advantage.” When one energizes a sprinkler, he is energizing a magnet which pulls a plunger, allowing water to flow.
He said he recommends the use of pressure-regulating valves when putting in a sports field, adding there will be varying pressures realized depending on how far the water is from its source.

“Sprinklers work optimally at certain pressure settings, and the electric valve will help to achieve that.”

One of the “Achilles’ heels” of the electric valve, Taylor said, is that dirty water can plug up its small ports. Most electric valves today are made of plastic, but brass models are still available. If valves are to be placed inside a building, he recommended brass be used because “a heck of a mess” will be the result of plastic splitting.

Quick couplings are an ideal addition to have in a system, Taylor said. They are well suited to hand-watering and for both season startup and blowout because they are on the main line, making it easier to flush water out of a larger-diameter outlet than through the much smaller orifice of a nozzle.

Controllers are the brain of the system, he said, adding modular units are becoming increasingly more popular. They allow for multiple stations to be put in.

“The big thing you want to have is continuity within your parts. With public tendering, that can be a challenge at times because it always goes to the low bidder, and you don’t necessarily always get what you wanted. But if the spec is hard and you can customize your system, you can plug in two stations, four stations, eight stations, 12 stations, and add on. You can have a base model with the system put in if you ever want to add to a system. It’s very easy to put in.”

Taylor addressed conventional systems with wires going out to valves, saying there are systems available where, instead of having individual stations, there could be two wires going out connecting decoders at valves. This could be a benefit with large systems, he said, adding going with a decoder system means tying into a proprietary technology.
He recommended a rain switch on a controller so that in the event of rain, the system will shut down.

“There’s nothing like the neighbours or taxpayers seeing it raining and sprinklers operating in the rain. They tend to get a little upset.”

Rain switches can be hard-wired or wireless. Taylor said he recommends wireless switches because they remove sensors out of the way of vandals. It is key yet inexpensive extra to incorporate, he said, adding it prevents irrigation when a certain water level is realized.

Typically, the controller is located inside a building. Having maintenance radio, however, allows stations to be turned on while the sports turf manager is out in the field. This can be particularly helpful when aerifying sports fields.
“You want to mark your sprinkler heads unless you want to harvest them with your aerator. With the maintenance radio, you can pop them up, put flags down and identify them.”

“So if someone breaks off a sprinkler head, that night when he goes to irrigate, the controller via the flow sensor will say, ‘Oops, I have an overflow going here,’ it will shut that station down and move on to the next station and have an alert…an alarm…on the controller.”

In the morning, the sports turf manager will be alert to the overflow.

In the event of a main line break, the entire system will typically shut down because it will realize something is wrong, but every single station isn’t likely to be broken. This translates into a significant water saver.

Although polyethylene pipe works well in a park setting, PVC pipe should be used on sports fields, Taylor said. It has greater water-carrying capacity and is the critical part of an irrigation system that many tend to take for granted.
For every 500 feet, it is recommended having a gasket extension joint of some sort, he said. PVC pipe is put together by solvent welding. When done properly, it is actually stronger than the pipe itself, he said.

“When it’s done properly, these joints should last for the life of the system.”

Wire joins the controller to the valves and provides the path through which the signal passes. TWU wire is 14-gauge and is the preference for sports fields, Taylor said.

“Use the right product up front and you’re not going to have any problem.”

A special cable is needed to monitor the flow sensor. Twisting of the wire when sending data across it will repel any interference. It has a foil sheath around it which protects it from interference from other power sources.

“It’s very important the flow sensor cable be that type.”

Taylor said that if a string of stations aren’t working, and they are in a certain order, the first thing to look at is the common wire.

“Individual stations will typically only affect one station.”

A 180-degree head puts down twice as much water as a full-circle head, taking 1 1/2 minutes to move each way as compared to three minutes for the head to go full circle.

Troubleshooting is something sports turf managers should be able to accomplish when problems are obvious, Taylor said. If a head is stuck up, it can be pushed downward by stepping on it in order to avoid it being run over by a mower. If a head is stuck on, it is a valve issue and not a sprinkler problem and is not shutting to allow the head to retract. If a head is broken off, a little “geyser” will become apparent.

“This is where a flow sensor pays for itself. The first time that station runs, it would turn on and then turn off. It would alarm the controller.”

When troubleshooting for wiring issues, Taylor said a multi-meter can be a valuable piece of equipment. If a station doesn’t come on, the voltage can be measured. The controller should be checked to see if there is voltage going out to the station. If voltage is going out, continuity can be measured. Continuity is tested through the station and will typically be about 29 volts. If there are two running, it will be doubled. If “wacky” readings appear, there is a problem, he said.

A particularly low reading means the solenoid has shorted out which requires having to open the valve box. If it is wide open with “one” flashing on the screen, there is zero continuity, meaning there is either a blown solenoid or a broken wire. If a number of stations are flashing “one,” the common wire needs to be checked.

Taylor said wire problems can be detected with a wire tracer which hooks onto the controller to trace the path of the wire. If it’s a direct cut, the cut will be found because the signal stops. If the problem cannot be found, a fault finder device can be used to determine where between two points the problem has occurred.

The best means to acquire evapotranspiration (ET) data, he said, is via an on-site weather station. The key is to know the precipitation rate of the sprinkler, understanding whether it is putting down one inch of water an hour or perhaps a half-inch. Another concern is the spacing of sprinklers, and whether it’s in a square or triangular pattern or if it’s inline or just a single head.

“How evenly is that water being applied to the turf?”

Taylor said central control is an important asset for the sports turf manager, allowing him to program and monitor from one site. He has access to flow sensing in real time and has one or more weather stations integrated into the system for accurate ET calculations. The central control system can be set up to allow the computer to determine how long irrigation should be taking place.

There are numerous ways to control satellites, he said. Some sites can be several miles away. To connect to those sites, there are land or ethernet connections if a network system is in place. A cell modem can be put inside the controller to allow access through the Internet. UHF radio is a viable  form of communication which has been around for several years. Another means is 900-megahertz radio which has no operational cost and no licensing fees. Cellular connections have a monthly fee and UHF radio has an annual fee.

“The more you have online with central control, the less often you have to go there as an irrigation manager.”

Taylor said central control will allow the turf manager to become aware of a leak before a crew member charged with mowing the field visually spots one and reports it.