Make sure your system is in working order and uses water efficiently. 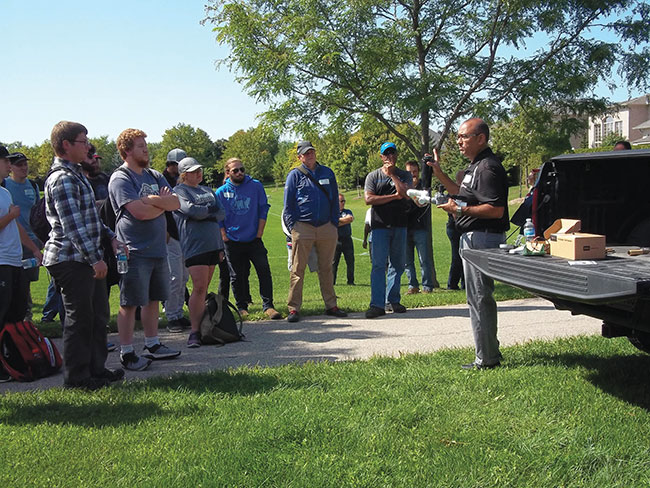 The creation of sports fields for public play represents a significant investment on the part of a municipality, and parks and recreation departments are obligated to protect that investment as best as possible. One strategy is to outfit a sports field with an irrigation system, especially if it’s a high-end playing surface that will serve as a venue for major tournaments aimed at bringing revenue into the community.

“The benefit of an irrigation system is to protect your large investment,” he told a large group of sports turf managers in attendance at the annual event.

In sports turf management, there is a requirement to irrigate at some point in order to maintain a healthy playing surface. Irrigation doesn’t necessarily have to be provided through an installed system. Fields can be watered through a quick coupler or water can be broadcast from a valve or from above ground irrigation sprinkler heads.

“We want to make sure it’s efficient use of water,” Hernandez said, noting that installed systems ensure water is used effectively. There is less waste because systems are specifically designed to cover targeted areas of turf on soccer fields, baseball diamonds or other playing surfaces. Automatic features also help save time.

Sports turf managers involved in the design of an irrigation system need to look where water is lost and how the loss of that water can be mitigated, Hernandez said.

“The master valve will hold back water to the main line irrigation system, and only when that zone or zones is requested to turn on will the master valve open and allow that water to enter into that main line.”

Hernandez said there have been occurrences of damage to the main line and, unless the matter is obvious where water can be seen gushing out of the ground, the problem is sometimes missed. Water will otherwise leak through the main line for the duration of the irrigation season.

“If it’s not caught right away, that’s a significant amount of water that’s leaking into the ground that’s not for irrigation purposes.”

Keeping a lid on water, money losses
The use of a master valve will control both water and money losses. Incorporating sensors will also save water and should be something to include when designing an irrigation system, Hernandez said. Rain sensors and soil moisture sensors will allow the irrigation system to shut down if there has been a significant amount of rainfall experienced.

“If we don’t need to irrigate because of rainfall, we are actually now saving more water from being used.”

Overwatering of sports fields is virtually eliminated by the use of soil moisture sensors. In most places in Canada, there is a desirable amount of precipitation in terms of rain and snow as well as a fair amount of available fresh water. Although sports turf managers consider themselves as water stewards, it’s still important to use water wisely, Hernandez said.

“It’s not so that we can just throw out an abundance of water onto a sports field just because we have it available to us.”

Most irrigation system manufacturers have sprinkler heads designed to shoot water a certain distance by using a certain size nozzle. Head-to-head coverage in which the spray from one sprinkler head reaches another and vice versa is the objective of a well-designed system.

“If you are designing an irrigation system for a sports field, it’s imperative that we design it in such a way that we’re using proper design techniques in terms of layout and in terms of spacing of the sprinkler heads.”

When designing a system for a soccer field, irrigation contractors and designers will consider the most trafficked parts of the playing surface such as goalmouth areas and the centre length of the pitch. They will ensure sprinkler heads are positioned accordingly so that water will reach key wear areas with the proper volume.

Hernandez recommended the installation of other valuable irrigation system components such as flow sensors to determine the amount of water running through the system when the sprinklers are on.

“It tells you in terms of volume or gallons per minute how much you’ve used on that cycle.”

Hernandez said more municipalities are tapping into central control as a means of keeping better tabs on their water usage. Without central control, more time is spent going from field to field to determine where there might be a fault in the system and why one area of a field is drier than another.

“Sometimes you have to inspect that system in order to verify where the problems are.”

“If you have a break in it, that’s a lot of water that can be released.”

Hernandez said the flow sensor might determine an excessive flow contrary to the volume of water that is supposed to flow through a particular zone. In such an instance the master valve can shut down if it registers an excessive flow, preventing large volumes of water from escaping.

Inspect the system
Like any mechanical structure, an irrigation system must be maintained with its components monitored and the system itself regularly inspected. All components must be adjusted to ensure they work properly and that the desired coverage is attained.

“We have to ensure the irrigation can and will function as it was designed to do. A properly working irrigation system will keep the landscape healthy and vibrant and will show water isn’t being wasted.”

An irrigation system should be inspected at least once a year, Hernandez recommended, adding it absolutely must be winterized in the fall. Failing to do so will result in the freezing and expansion of water within the system that can cause significant damage to the piping and workings of the system.

All aspects of an irrigation system’s components must be inspected. If the system is operated by central control, it will notify a sports turf manager when issues arise. Without central control, physically going out to inspect a field’s system is imperative, he said.

Before opening a water source in the spring, it is important to check for any damage that might have occurred during the winter and to inspect the system’s backflow prevention device, which must be done annually by law, Hernandez said. A backflow prevention device is a check valve that allows water to flow through it and into the irrigation system while not allowing water to re-enter potable water. It protects potable water from any contaminants or any back siphonage that may occur that could potentially suck back into potable water.

He cautioned that when starting up an irrigation system in the spring to open the valve slowly.

“If you just crank that valve open, the valve itself will allow water to shoot through that system and potentially shatter. It will break piping and shatter fittings.”

Filling the main line needs to be done slowly, he said, adding the amount of pressure in the pipe “is extraordinary.”

Visual inspections of a field should be made to ensure there is nothing out of the ordinary such as leaks or anything else the system wasn’t designed to do, Hernandez said. Valves, manifolds and valve boxes are other areas that should be closely inspected. A look inside a valve box can ensure there are no valves leaking and that the wiring to the valves is intact. The PVC manifold holding the valve in place should also be checked for leaks or cracks.

Don’t overlook wiring
Wiring must not be overlooked, he added, suggesting it can be a “nightmare” if there is a problem. Connectivity between the actual irrigation electronic valve and the timer must be in good standing, and nothing should be corroded or exposed. The inspection needs to ensure the timer “is talking to the valves.”

Hernandez suggested that when opening up water to an irrigation system – allowing entry at a slow rate – that each valve be cracked open zone by zone, allowing water to enter into the valves at the same rate.

“You don’t want to fill up the main line and then crack open a valve immediately, filling that valve which has been empty from the winterization, and now it’s filling up at a rapid rate.”

The water is under high pressure in many cases and could damage fittings, sprinkler heads and pipe. He suggested allowing water to enter into the lateral line side of a sprinkler zone at a slow rate when operating a system for the first time in the spring.

“Do so for each one of those valves until everything has had a chance to fill up with water. Then you can open the main line fully, close off all your valves and start testing from there.”

Scheduling is a vital part of the irrigation process to not only avoid overwatering, but under-watering as well. The signs of stress will be readily apparent with under-watering. Knowing the condition of the soil is a key consideration when scheduling. Sports turf managers need to know how much water each sprinkler head puts out. If the infiltration rate of the soil doesn’t allow water to enter the soil at a quick rate – such as with heavy clay – scheduling becomes important. A limit may need to be placed on the amount of water put down at one time, possibly spreading it out over the course of a week, depending on play.

“You want to make sure the schedule is tied into the type of watering we’re doing and the soil condition on which it sits.”

The sprinkler heads’ nozzles determine the volume of water being broadcast, making it imperative to ensure they are still in place in the spring. If not, they will need replacement. Hernandez said checks must be made to ensure all heads are delivering the proper coverage, including distance, rotation and arc. They need to pop up to their required height to establish the proper coverage yet not exceed that height so as to become a tripping hazard.

All components such as rain sensors, soil moisture sensors, flow sensors and the master valve must be tested each year to make sure they remain functional, he added.

Before putting a system to bed for the winter, components and piping need to be emptied of moisture before frost sets in or serious freezing temperatures occur. The compressor to be used in winterizing an irrigation system should be sized in accordance with the system itself, Hernandez suggested. Compressors, measured in cubic feet per minute, blow compressed air into the system to rid it of all water. The compressor can be detrimental to an irrigation system, however, because compressed air reacts differently from water and can damage piping, heads and valves if not used properly, he warned.

When running a compressor, outputting more pressure isn’t the best practice. Hernandez said between 40 and 60 pounds per square inch is adequate.

Before running a compressor on a system with a flow sensor, the sensor’s paddle should be removed, he said, noting the sensor might otherwise sustain significant damage.

“You remove the flow sensor paddle, put in a plug, and away you go and start winterizing.”

Special attention needs to be given to areas separated by isolation valves, he added.

“Once you’ve blown out that one section, close the isolation valve so you can maintain a certain pressure to blow out the rest of that system.”

When the system is being blown out, water will emerge from the heads followed by a mist. Once mist is no longer visible, it is likely that air has run through the sprinkler head for too long, Hernandez said, noting that sprinkler heads have small plastic mechanical gears that can overheat and damage the sprinkler head.