Beware of contributing factors that can derail a lawn 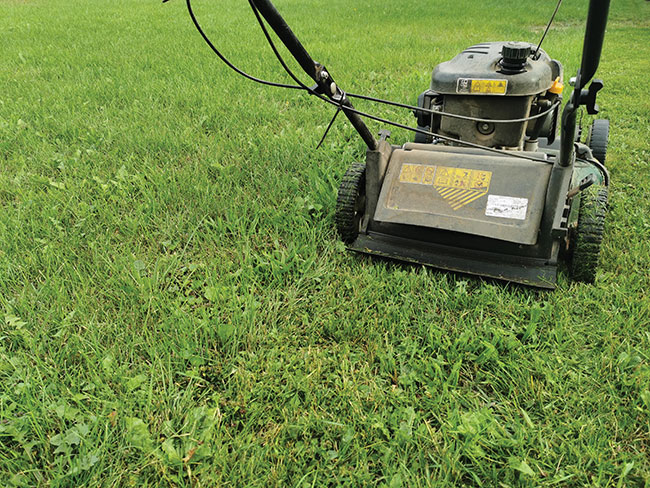 There are several obstacles that can get in the way of achieving a healthy home lawn. Inadequate sunlight, insects and too much or too little water are among the primary reasons that can keep lawns from reaching their full potential.

Lawn care professionals attending Nutrite’s 11th annual spring lawn care seminar in Guelph were presented with scenarios of various turf problems they are apt to encounter each season as well as the solutions to overcome them.

“We’ve been looking at soil microbiology for thousands of years, but really in only the past 20 or so years have we started to get our head around what’s going on down there,” he said.

Schneider pondered why some lawns fail while others thrive, citing inadequate sunlight as perhaps the No. 1 culprit. He reminded his audience that if there was one thing to be learned in university, it is that a plant requires air, light, water and food in order to grow.

Large trees not only block much-needed sunlight, but their roots compete for water, depriving turfgrass of its necessary fill.

“The tree wins every time.”

But there are other contributing factors that can derail a lawn, including root competition, heavy traffic and homeowner mistakes. Often, the latter is a leading contributor to a lawn that falls short.

Schneider said that when a homeowner installs an irrigation system, the result is almost predictable.

“They’re going to have bentgrass in a couple of years because they like to go out every night after dinner and have a coffee or drink and turn on their sprinklers and just water, water, water for that five or 10 minutes. That encourages bentgrass which is why every golf course in the world has sprinklers around the greens, tees and fairways. They are encouraging bentgrass.”

Homeowners, on the other hand, can actually grow bentgrass without trying, Schneider said, adding it just happens and then is difficult to get out.

A lawn care professional is often handicapped by a property’s soil type. He could be dealing with a sandy soil on a property in one end of town and one that is clay in another part of town. A soil’s physical, chemical and biological properties “can really determine how successful your plants and your programs are.”

Soil type
The professional must learn to deal with the soil type he’s been given.

“Soil physics is probably the No. 1 thing I encounter as the leading issue of the turf problem. Aerification and overseeding are essential. You’ve got to keep it up. Keeping that air in there and opening that soil up at the right time of year is essential.”

Maintaining soil pore space is vital as the ability for air to move down and water to adequately infiltrate also influence nutrient uptake. Nutrients applied won’t be as readily available to the plant if the soil is hard packed and not opened up.

Although a soil’s pH level is an important consideration, Schneider said little can be done to either raise or lower levels that aren’t optimum. The ideal pH range for a home lawn is between 6.5 and 7.2, but Schneider said good turf can still grow on soils outside those numbers.

“I’ve seen great turf on soils that were eight and excellent turf at 5.5. There’s a big swing in there.”

Testing for soil pH isn’t necessary every year and not even on every property, he said, but noted periodic testing of sections within a professional’s territory is encouraged.

Microbial activity in the soil isn’t readily apparent until May when the soil has had the chance to sufficiently warm up. Microbial activity typically drops off during the heat of summer, particularly when soil temperatures exceed 25 degrees Celsius.

Recalling the excessively wet spring of 2019 in much of Ontario, Schneider said there wasn’t a lot of microbial activity at the time. Once waterlogged soils began to dry out, activity picked up, including that of earthworms.

“Golf courses don’t like worms, but we like worms. Those are nature’s aerators. They’re doing the work that we don’t have to. It’s also the sign of a healthy soil.”

Carefully planning out fertility programs for lawn care customers is essential, Schneider said, including the need to select the right product to be used at the right time. He said three to five pounds is the typical range for Ontario, although some areas may need more while others require less.

“Don’t overstimulate the turf. Don’t use a really quick-release product in the spring unless you have to. If you have a poor lawn, you want some activity, but don’t add gas to a fire.”

A product with plenty of readily-available nitrogen that is 50 per cent slow release isn’t what should be used in mid-summer, he said, because of the potential for increased phytotoxicity or a higher salt index due to the urea content.

“Don’t make it a price per bag decision.”

Having to mow more frequently because of the product choices made will negatively impact revenue, he added.

“If you have a really sandy site, you might need a little more food.”

Added nitrogen
In an excessively wet year, such as that experienced in 2019, a pound can be added because it’s working quicker through the plant. He cautioned, however, to never exceed six pounds or apply less than three.

Three pounds of nitrogen three times a year with one product isn’t a bad program, he said.

“Don’t put your peaks and valleys in the wrong spot.”

Fertilizer should never be placed inside a moist hopper, he said, noting it will clog up the machinery.

Three fertilizations, three weed controls and two aerations make up a typical program, but Schneider suggested the best time to aerate is in August or September to help relieve turf of the stress of summer. Aerating in the spring is fine as long as the ground is dry, he added, but emphasized that the practice not ever be done in the heat of summer.

Overseeding a lawn can ideally be done in conjunction with aeration by dropping seed into the holes and establishing good seed-to-soil contact.

Laying sod is a service many lawn care companies prefer not to offer due to its labour intensity, yet sodding is sometimes a better option than “monkeying around” with a poor lawn, he said.

“Sometimes you have to pull the plug and start from scratch.”

Sodding is also an expense most homeowners wish to avoid. If sodding is necessary, however, it’s best to avoid doing it during the heat of summer. A starter fertilizer applied beneath the sod helps it to establish faster. After-care will be required, including watering and rolling.

“Water frequently for the first two to three weeks until you can’t pull that sod up.”

A lawn care professional needs to allow for other essential services, Schneider said, rather than focusing mostly on weed control.

“We’ve got to stop killing weeds and we’ve got to grow grass. It used to be, ‘let’s kill the weeds now and think about growing grass later.’”

Related
Keeping things simple can be a formula for profit in the lawn care business
Lawn care needs won’t always be the same from one year to the next
P.E.I. lawn care, landscaping companies awarded additional essential services
Compost topdressing a valuable part of lawn care