Artificial turf is not maintenance-free, contrary to popular belief, and can live past its projected lifespan if properly looked after. 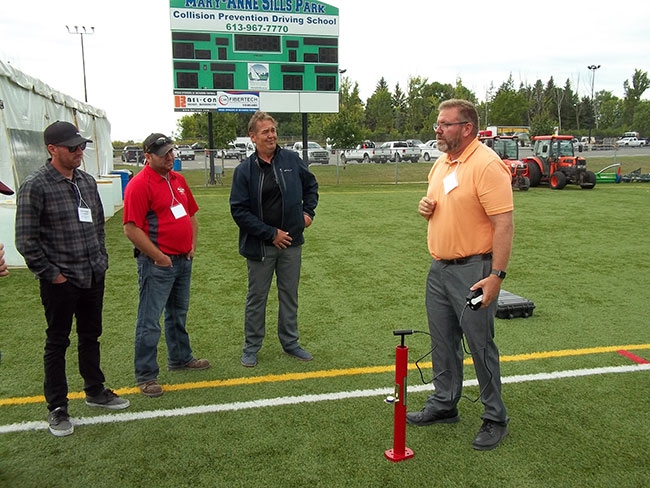 Dr. Eric Lyons, right, of the University of Guelph, explains the use of a Clegg hammer to test the surface hardness of the artificial turf field at Belleville’s Mary-Anne Sills Park. Among those looking on is Mark Klementti (black jacket) of RK & Associates, who spoke earlier about proper synthetic turf maintenance.

Regular and proper maintenance of artificial turf sports fields can extend their lifespans another three to four years, giving municipalities a much greater return on their investment.

Mark Klementti, principal/consultant at RK & Associates in Barrie, Ont., a firm specializing in the design, specification, tender and project management for artificial turf sports fields, said some of the synthetic fields in the Greater Toronto Area (GTA) have had to be replaced prematurely because they weren’t being properly or regularly maintained.

“We’ve replaced fields in Ontario that are nine and 10 years old because the maintenance is not being done,” he told an audience of sports turf managers attending Sports Turf Canada’s annual Ontario field day at Belleville’s Mary-Anne Sills Park in September.

Klementti cited the artificial field at Mary-Anne Sills Park as an example of how regular maintenance can give synthetic playing surfaces a longer life when they are routinely maintained.

“You never walk onto a natural field or even the artificial turf field here and see that there are issues with it. They’re always maintaining them. This field is 10 years old. It’s two years over the warranty. It’s in incredibly good condition, considering the usage that it gets. That’s due to the maintenance team here in Belleville.”

He said the city’s commitment to regular maintenance dispels an oft-heard myth about artificial turf.

Prior to his address at the field day, Klementti conducted a few tests on the park’s artificial playing surface. He said that when the field was first installed 10 years ago, its fibre depth was 55 millimetres. The depth today is 38 millimetres, giving the field another four years of potential use before it needs to be replaced. A measurement of the field’s infill depth also fell within acceptable parameters.

A study he conducted three months ago on nine artificial fields in the GTA found their fibre depths had eroded to 24 or 25 millimetres due to irregular or improper maintenance. Klementti said infill wasn’t being added as needed and groomers were run over the fields only sporadically.

Belleville’s field is one of the bigger success stories in artificial turf installations, he said, adding a critical mistake was almost made when it was originally designed for the park.

“Ten years ago we were asked to design and manage the installation of an artificial turf field here at the park. We met with the city and the local stakeholders and, within three or four weeks of starting the design, they came to us and said, ‘Why are you taking our best natural field and turning it into an artificial turf field?’”

Klementti said there was logic in their argument, and another site at the park was sought. The alternate site eventually chosen was essentially a waste area littered with rocks and stumps. In hindsight, he said the correct decision was made in order to preserve a pristine natural turf playing field.

“Artificial turf should and will never, ever take away or take over from natural turf fields,” he said.

Synthetic fields have their place, however, and can be a significant asset to municipalities that wish to maximize their sports programming, Klementti said.

Cost comparisons
When comparing the cost of construction of a category two or three natural field to that of an artificial turf field over a period of five years, the natural field will be a lot less expensive to build and maintain, he said. But over a period of 12 to 14 years – when the lifespan of an artificial turf field reaches its maximum – the synthetic field will have cost less over that period and can feasibly realize 30 to 40 per cent more usage than the natural field.

Klementti said cities such as Belleville will find that during their shoulder seasons – or even during a wet July –they can temporarily shut down some of their natural fields to allow them to regenerate while permitting play to continue on an artificial turf surface. Many municipalities in North America, he said, seek to have one artificial turf field for every five natural fields so that programs can be devised that allow the natural fields to close for a week to 10 days for recovery without inconveniencing user groups.

Municipalities considering the installation of an artificial turf field must know what they want from a performance, maintenance and durability standpoint, he said.

“How long do you want it to last?”

The decision-making process requires the collective input of the municipality or school board, the local user groups and the maintenance team. Klementti said budget is usually the deciding factor in determining the type of field desired.

“Budget will also drive the decision from the standpoint of what level of durability do you want.”

Using the artificial turf field at Mary-Anne Sills Park as an example, he said the field wouldn’t meet the specifications of a professional soccer team. The field was designed as a multi-sport surface that needed to be high in durability, low in maintenance and yet meet high usage demands.

Klementti said that depending on what the municipality does on its artificial turf fields will determine the level of maintenance required.

Attention to detail must be given top priority to ensure the municipality or school board gets what is specified and paid for, he said.