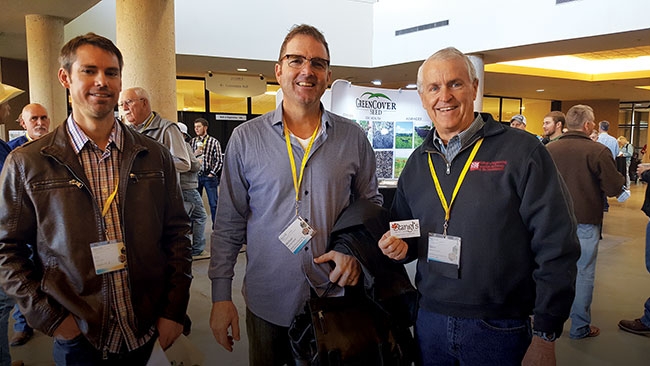 Michael Stangl, centre, and co-workers at a trade show. He’s been involved in lawn care since he was 16, and has gone from conventional lawn care to one that uses no fertilizer or pesticides.

May 13, 2019 – Not all lawn care businesses march to the beat of the same drummer. Many – probably most – offer their customers programs that include a specific number of annual fertilizer and pesticide product applications. The latter, usually herbicide applications, can vary from region to region, depending on the product’s legality.

Customers are generally satisfied with these companies’ work. They may not understand the science involved and probably don’t care one way or another. As long as they have a green, weed-free lawn, they’re content.

At least one company has a different approach toward establishing healthy lawns for its customers. Stangl’s Enviro Lawn Care of St. Catharines, Ont. has adopted a regenerative approach that targets the soil with an end goal that strives for greater sustainability.

“What got me into this was my own results of the toxic chemicals on me,” company owner Michael Stangl said. “I looked at the sustainability of the industry itself and I didn’t want to end up having cancer down the road.”

Stangl was introduced to the lawn care industry in 1981 as a 16-year-old working for his father. Their company was “atypical,” he said, offering its customers three fertilizer applications each year as well as a couple of pesticide applications. As the decade progressed, a rising call for organic alternatives began to emerge, but these products were both limited and comparatively expensive.

“It didn’t make it cost effective nor profitable to compete with major companies,” he said.

But the notion of a more natural approach got Stangl thinking.

“I can throw fertilizer on and when the fertilizer makes that grass grow green and it’s growing fast and doing the thing that fertilizer is known to do, the consumer identifies that visually that it’s working. Then when we put a spray on and see the destruction of a weed, the consumer also sees that as working. But in nature, nothing works as quick as that.”

Stangl said he recognized a need for change even though his business was doing more than a half million dollars in sales annually. In spite of the healthy revenue, the business took a step backward each time a rain event occurred shortly after a pesticide application was made. He said it would require another visit to do it again at no additional charge to the customer.

The company had catered to the customer’s desire for instant visual gratification, but Stangl began to question the impact he was making on the health of the soil itself. He also became concerned for his own health, noting that although he wore rubber boots, gloves and a respirator, he found his eyes were dilating and he was getting dizzy whenever he sprayed for weeds.

By about 2005, in anticipation of the coming Ontario ban on most traditional pest control products, Stangl began to invest in natural products and focus more on the soil. He said the association of the plant with the soil has gotten lost in lawn care “because it’s been stuck in a visual field.” That visual field, he noted, is fortified by the marketing strategies of commercial fertilizer manufacturers, which he suggested are taking a pharmaceutical approach to say, “Here’s your script for this month, here’s your script for that month…”

Stangl said companies that provide traditional lawn care services have led their customers to believe the type of work being done to their lawns is correct. He’s now on the other side of the fence and said that although his customer base is smaller, he’s happier.

Stangl says he is now in a niche situation and in a “blue ocean” without competition, suggesting the lawn care industry in general is in a “red ocean” doing the same thing with a fertilizer/spray approach.

Focus turned to the soil
Some weeds are still to be found on a number of the lawns in his care, but his focus has turned to what is happening in the soil. By correcting the soil’s biology, the plant life above the surface can also be corrected, he said, noting he has found success with compost teas and fish hydrolysates as fertilizer.

Stangl tests his customers’ soil using a penetrometer. At a Niagara Falls sports field he tested, the instrument showed 300 pounds per square inch in the top three inches. He said roots like 150 psi, adding that once 300 psi is reached, the infiltration of water and air in the root zone stop and fertilizer sits on top.

The field was aerated and a small harrow was pulled behind it to break up the cores and rip up the ground. Stangl said that without a proper infiltration rate, the tendency is to apply inputs to the field.

“You want the field green so you’ll use more fertilizer, destroying the biology and creating more dependency on the product, and at the same time the bacteria will create nitrates that will force up more weeds, including crabgrass.”

On a compacted soil, there is more anaerobic biology, he said, that creates or gasses off the minerals and nutrients the plant requires. If the plant isn’t getting what it requires, it becomes weak and is targeted by insects’ infrared vision.

Last year, a couple of residential lawns in his care were dug up in spots, suggesting the presence of grubs. In such instances, the compost teas prove helpful with natural input elements that are fungal, bacterial and predatory. When there is clear evidence that animals such as raccoons, skunks and opossums are digging into the ground, Stangl said he places a few drops of commercially available coyote urine onto the ground that is blown by the wind across the lawn. Digging animals can detect the urine as predatory and stay away from the site.

Michael Stangl, centre, and co-workers at a trade show. He’s been involved in lawn care since he was 16, and has gone from conventional lawn care to one that uses no fertilizer or pesticides.

“I now know that everything I do, I’m very conscious of it,” he said, adding that if he chose to change the environment, he’d be making it unhealthy by putting more carbon dioxide into the atmosphere. “I’m changing what the soil is really meant to be.”

Stangl said that when a new house is constructed, more thought is put into the building’s structure than what is outside. Builders figure all that is required outside is to throw “dirt” onto the ground, grade it and lay sod over it. He said the sod comes from a field that was fertilized and possibly subjected to Roundup.

“We might be absorbing this through our skin or it’s gassing off into the atmosphere or it gets into our water. If we change our way at how we look at the soil, every home lawn can become a carbon sink and drastically change the landscape itself by absorbing what it should be doing.”

He figures he absorbed 11 tons of carbon dioxide in 2018 and more than 50 tons over the past four years.

Regenerative lawn care has four properties to be successful, he said:

Stangl admitted, however, it can also be stressful, suggesting many of his competitors may perceive his approach as pseudo-science.

“I’m doing something justifiable for the entire planet and it’s sustainable and it works.”

In 2018, he said he had 30 per cent of the lawns under his care at well above 75 per cent of where they should be with only one or two weeds and no need to spray.

“That’s the first thing you see with a healthy soil – the insects disappear.”

While a typical program by most conventional lawn care companies is five applications, he does seven (one a month during the growing season). The person who wants an immaculate lawn is not his customer, adding companies that offer conventional lawn care services will “pound the snot” out of him. Those who subscribe to his process, he said, realize they’re helping to restore nature, restore the balance, pull carbon dioxide out of the atmosphere and put it back into the ground, decrease inputs and increase sustainability.

In traditional lawn care, there are three ways to lose a customer, Stangl said: bad communications, bad control of weeds and a lawn that isn’t green.

“If you’ve got two of those working for you – the lawn’s green and you’ve got great communication – they don’t mind a bit of weeds because they know we’re working on it and building a process.”

Stangl advises his customers to mow at a height of three inches, telling them, “The more the solar panel there is to collect the sun’s energy to do its job, the faster we can get through this (to establish a healthy soil).”