Features Agronomy
Micorrhizae helps to give turf a leg up

Mycorrhiza, referring to the symbiotic relationship between a beneficial fungus and the roots of a vascular plant, has been known for more than a century to help trees better survive, and that same science can be applied to the lawn care industry for the betterment of turfgrass health.

John Renaud of Premier Tech Home &â€ˆGarden spoke to lawn care professionals in March in Guelph at the fourth annual Nutrite professional seminar about the benefits of mycorrhizae and how the science can be useful in turfgrass survival and overall plant health. In an era when pesticide products have been banned in many parts of Canada and there is increased pressure to drastically cut back on phosphorus use, mycorrhiza has already been embraced by the industry in Quebec, and inroads are now being made in Ontario. 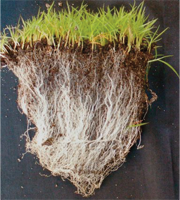 A plant’s roots serve several purposes, including anchoring the plant in the ground and pulling up water and nutrients from the soil. The symbiosis between the plant’s roots and hyphae mycelium gives the plant an added edge. The mycelium is a tiny network of hairs which are smaller than those on the human hand.

“They’re able to find the nooks and crannies in the pores in the soil to help the plant find water and nutrients, etc.,” Renaud said.

The spores penetrate the plant’s roots and develop a number of connections. After moving away from the plant, they will mine nitrogen, phosphorus, potassium, water and a number of microelements, and provide them to the plant.

“The plant says, ‘Thanks very much,’ it grows, becomes healthier and more vigorous through its leaves and needles, gets going to photosynthesize and make carbohydrates, and it’s going to give some of that to the fungus.”

The plant gets a greater percentage of nutrients and water than it would otherwise, and some is given back to the fungus.

Renaud said it is the hyphae mycelium which is the secret to the efficiency of mycorrhizae. To put its efficiency into perspective, Renaud said a single-leaf plant growing in a one-litre pot will have about one kilometre of hyphae. The mycorrhizae increases the root area about six to 10-fold, helping the plant to become much healthier.

About 90 per cent of all plants require mycorrhizae, he said, and they’re found in almost all ecosystems globally.

At Premier Tech’s laboratories in Rivière-du-Loup, Que., one can clearly see how nutrients are picked up by the hyphae and transported and given to the roots.

Spores are propagated and put into a formulation to be used by arborists, lawn care professional, sod growers and others.

Renaud said among the benefits of mycorrhizae are better establishment and plant survival. The expense and benefit to the landscaper in having the plant survive isn’t so much the cost of the tree or the shrub, he said, but rather the impact on payroll whenever an employee must go back to a site and replace a tree. Better growth and higher yields are other benefits of mycorrhizae.

Some of Renaud’s colleagues who have agricultural customers in Saskatchewan have reported five to 15 per cent increases in the yields of lentils, at the same time requiring less fertilizer.

Mycorrhizae offers greater resistance to stress, he added, saying results would compare to someone who exercises regularly, eats properly and takes care of his body.

“It’s that boring, but what it does do is give the plant a much better resistance to stresses.”

If one didn’t take proper care of his body, was overweight, didn’t get enough sleep and smoked, he’d be more prone to get sick. A healthy individual would have less chance of getting sick and would have a better chance of recovering from an illness if he was sick.

It is ideal for the reduction or optimization of fertilizer. Landscape Ontario has recently been promoting less use of phosphorus, noting the abundance of phosphorus already in soils. Yet it’s an ion which gets bound to the soil particles, and the plant is unable to break the bond. The mycorrhizae, however, can and the phosphorus in the soil is utilized without having to add any additional phosphorus.

Helping the plant access water is one of the pluses of mycorrhizae, Renaud said, especially with water table levels diminishing.

Renaud said mycorrhizae may not be the solution to the world’s woes nor will it fix bad planting habits, but it has its recognized benefits.

In situations of compacted soil which is dense and where porosity is minimal, mycorrhizae can reduce compaction and produce a better structured soil.

“The mycorrhizae can contribute very favourably to having good soil structure.”

In turfgrass use, significant inroads have yet to be made in Ontario, but a large lawn care company in Quebec incorporates mycorrhizae twice a year, in spring and August, for the purpose of helping the turf survive.

A 50-millimetre tree might cost a municipality about $500 to plant, but, “if they can improve the success of that tree surviving, it’s huge.”

The Canadian Food Inspection Agency evaluates all of Premier Tech’s products and confirms mycorrhizae works as is stated. Renaud said it has excellent viability for about two years, but suggested not discarding any product that might be as old as four or five years. Its viability may have diminished, but it’s still probably good, he said.

The way it is propagated is somewhat difficult, Renaud said, and requires a plant host. At one time it was propagated in a greenhouse environment, but, if there were pathogens in the greenhouse or in the soil the roots and fungus were sharing with other plants, the pathogens would also be shared.

Today, petri dishes are used in a laboratory setting with embryonic roots of carrots, and the mycorrhizae is grown and harvested.

Renaud said the benefits of the lab method is that the number of propagules is consistent, quantification is simple and accurate, it is pathogen-free, there is better flexibility and formulation, higher production capacity is realized, and a better quality product is produced.

He said many might wonder why mycorrhizae needs to be added if it is naturally-occurring, organic and is already there. He suggested that when new subdivisions are built on what was once farmland, soil is typically stripped and stockpiled and left to sit for a couple of years while residential construction takes place. When that soil is to be used again, it is “woefully lacking” in many of the key microbial components.

Construction practices, tillage, removal of topsoil, site preparation, compaction, pesticide use, and leaving soils bare all contribute to a reduction of mycorrhizae in the soil.

If a site is being seeded or sodded, the soil should be prepared in advance, the mycorrhizae broadcast and then seeded or sodded. Afterward, it can be rolled and watered, he said.

In areas where a pesticide ban exists, mower blades should be raised and sharpened and bare areas should be topdressed and overseeded, allowing the mycorrhizae to help the turf become thicker and healthier.
Renaud said mycorrhizae helps reduce phosphorus fertilization by about 75 per cent because it can pull what’s already in the soil. Plants with mycorrhizae can absorb five times more phosphorus than those without.

Watering needs are reduced and turf cover is achieved twice as quickly than without mycorrhizae.
In sod farming, he said sod can be harvested twice as fast and it won’t fall apart.

“It helps the sod knit better and be able to be harvested sooner.”

Sod farmers can also realize about a 33 per cent reduction in their fertilizer use.

There is less incidence of dollar spot because the plant is healthier and more resistant, Renaud added.
What the mycorrhizae contributes is subtle, but the difference can be observed over time if one row is planted with it while an adjacent row is planted without.

The product will give more of a cumulative benefit unlike the “big bang for the buck” that a product like Miracle Gro would offer. Miracle Gro will give an instant flush to annuals and perennials while mycorrhizae adopts a slower and more gradual process. If it’s put on in the fall, for example, it will likely sit dormant until about mid-March, but its impact can be observed by June or July.

Renaud said the quality of the soil will have an impact on the effectiveness of mycorrhizae. If the soil can be amended, it will make the nitrogen, phosphorus and potassium available for the plant.

The symbiotic relationship with the plant is basically forever, he said. If a landscaper is using mycorrhizae for trees and shrubs, he will use it once. It will stay there for as long as there are roots with which it can connect. With annual plants and vegetables, it will be used each year.

Something that will destroy mycorrhizae is compaction. In sports field applications, where there is a lot of wear and traffic, it will be used annually.