Having hosted two Canadian Open championships during the past 10 years,
and already preparing for the 2012 Open, the Hamilton Golf &
Country Club has had plenty of media exposure in recent times.

On Canada Day this summer, the more-than-century-old private golf club opened a new nine-hole short course in homage to legendary architect Harry Colt, who created Hamilton’s original west-south course in 1914. Six of the nine par 3 holes on the new short course are modeled after some of the more memorable holes which bear the Englishman’s stamp. 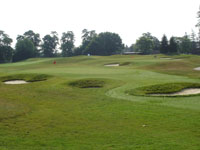 • The 11th hole at Royal Liverpool in Lancashire, England

• The 14th hole at Royal Portrush in Northern Ireland

• The 7th hole at the Stoke Park Club in Buckinghamshire, England

• The 14th hole at the Wentworth Club in Surrey, England

The remaining three holes pay tribute to the Hamilton club’s rich history and are named for the former farm which had occupied the golf course property, Colt’s longtime business partner Hugh Alison, and Colt himself.

The replica holes weren’t created to the precise specifications of the originals, superintendent Rhod Trainor said, but are meant more as scale models, giving Hamilton’s members an appreciation of the work Colt had done worldwide.

“It’s designed to give the members a flavour of what each hole looks like,” Trainor said.

The new short course, built at a cost of $300,000 by NGF Golf/Northgate Farms Ltd., was constructed within a tight 10-acre parcel of land that had previously served as Hamilton’s practice range. Designer of the short course was Tom Clark, who has provided his architectural expertise to the Hamilton club for the past two decades.

“We developed a great relationship with Tom Clark and Rhod Trainor,” said Bill Searle, NGF Golf president. “It was a unique project for us in that when you’re working on such a tight parcel of land, you have to make every square inch count as you put the pieces together.”
NGF Golf had previously completed a new irrigation pond at the golf course and made significant renovations to Hamilton’s east course last fall.

Two sets of tees on the new short course allow members to test their short game skills on total yardages ranging from 1,070 to 1,250 yards. The shortest hole from the tips is only 75 yards while the longest measures 210 yards.

Trainor said Hamilton boasts an active junior program, and the short course should prove to be beneficial to the younger set. With restricted tee times for juniors on the regular course, the short course is an ideal venue for younger golfers to develop the necessary skills and lessons in etiquette to bring forward to the championship layout.

“It’s going to be a great facility for members to enjoy,” Trainor said. “They will be able to work on their short game, it will be the ultimate learning centre, elderly members who feel uncomfortable on the big course will be able to play here, we’ll see a lot of family play, and the caddies will be able to get out there and have some fun. It will also be a great training ground for the maintenance crew.”

The short course was constructed using native soil available on site. Once the holes were shaped, seeding got underway in August of last year. Greens were seeded to T1 creeping bentgrass while remaining areas were seeded to L93 bentgrass.

Trainor said the greens will be maintained at a somewhat greater height than those on the west, south and east nines, to give the new putting surfaces a chance to adequately grow in, but will be mowed at the same height beginning next spring.

Bunkering is not as deep as that at the original holes on which the short course is modeled, but attempts have been made to ensure surrounding fescue stands are strong reminders of some of Colt’s finest handiwork. The putting surfaces are also not as large as the originals.
Trainor’s own staff installed the irrigation for the short course and worked closely with NGF Golf’s team. He said the short course project contributed to significant overtime for the grounds maintenance crew as they balanced the construction project with the maintenance of the west, south and east courses.

Hamilton’s practice range was relocated in 2009 to a more spacious site on the property. Measuring 360 yards deep by 350 yards in width, the facility allows members to be able to hit any club in the bag without the need for the installation of perimeter safety netting. The better equipped range is also more conducive to the needs of the PGA Tour professionals who will be playing in Hamilton at the 2012 RBC Canadian Open.

An ice storm in 2008 led to the collapse of the old range’s barrier netting, something which will no longer be a concern.

The site of the new short course will be transformed into hospitality areas for the Open with tenting and other infrastructure temporarily being erected. Because the tee areas are flat, tents and trailers will be easier to set up without the need for specialized propping. The infrastructure will likely kill the grass, Trainor said, “but that’s all it is is just grass.”

Hamilton has always had a short course on site,dating back to the construction of the original 18 holes. Changes had been made to the original short course in 1974 when Robbie Robinson designed the east course.

“Even though we’ve always had a short course, this has taken on a new life,” Trainor said.
Aside from being an ideal training ground for Hamilton’s junior program, the new short course has also become popular with many of the club’s older senior members who feel their game has become too slow for continued play on the regular course. Trainor noted, however, the course is intended for normal play and not to serve as a facility for members to hit ball after ball from a shag bag.

A 22-million-gallon water reservoir was recently constructed on the property which will give the course greater control of its water usage. Water levels are controlled automatically for the reservoir, irrigation pond and wells. Trainor said he plans to keep levels at the irrigation pond consistently down by six inches to allow for the possibility of a sudden thunderstorm. An intense storm can increase levels quickly, he said, and water which spills over the top will have been wasted. The pond features all new rock work around its perimeter, adding to its aesthetic value.

The Hamilton club is home to more than 1,200 members of which about 75 per cent are golfing members. About 200 new members have joined the club during the past five years.
The club was incorporated in 1906, but its history dates back to 1894 when its inaugural round was played on a 12-hole layout adjacent to the Hamilton Jockey Club property. Two years later, the club moved to a new nine-hole facility at the former Paradise Farm property on the south side of Aberdeen Avenue in Hamilton. It later expanded to 18 holes before the club relocated to its current Ancaster property on the former 200-acre Grange farm. In 1920, the club purchased an additional 119 acres east of the current fifth and sixth holes on the south course. Seventy-five of those acres were developed in the early 1970s to accommodate the new east course.

Colt’s original west-south course design has remained virtually intact with the exception of changes made to the old 15th and 16th holes and changes in green locations for the fourth and 13th holes.