Features Agronomy
Dollar spot: why is it so aggressive in the fall?

ALTHOUGH golf course superintendents are largely able to keep dollar spot under control through the first few months of a season, the disease traditionally makes an aggressive comeback in the early fall.

Theories abound as to why that’s the case, but Penn State University pathologist Dr. John Kaminski has a couple of possibile explanations of his own. 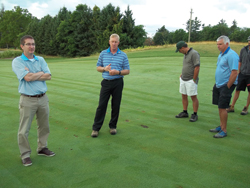 While on the first leg of a turf academy series sponsored by Plant Science/BrettYoung at four Ontario golf courses in July, Kaminski shared his theories with about 25 area superintendents at Otter Creek Golf Club in Otterville.

His first theory, which he admitted he doesn’t necessarily endorse, is based on data collected from a research trial at Penn State. In one trial plot, fungicide is sprayed every two weeks beginning in late May to keep the sclerotinia pathogen under control, with the treatment continuing until June or July. A second plot is left untreated.

“It almost takes out the entire turf,” Kaminski said.

He said that when controlling the inoculum and the dollar spot, perfect turf was realized. No nitrogen was put down on either of the plots. He speculated that maybe the dollar spot took off on the treated plot because there wasn’t as much nitrogen present as there was in the untreated plot due to it being hit so hard by the disease. On the untreated plot, perhaps the senescent tissue went back into the soil where nitrogen was present, and the turf recovered because it had enough of the nutrient available for recovery.

He said that although that was one possible explanation, he doesn’t necessarily agree with the explanation. His second theory, however, is likely more practical, he suggested.

When fungicide is sprayed on turf, not only does it control dollar spot, it is likely knocking out a multitude of natural antagonists to the sclerotinia pathogen, Kaminski surmised.

“So, if we’re knocking back the sclerotinia as well as these natural antagonists, and then we take that fungicide away and the antagonists aren’t there to stop it, it rebounds like crazy. Maybe that’s what’s going on.”

Kaminski offered a possible explanation for the results of the untreated plot where the 30 per cent dollar spot presence recovered on its own.

“What happens when you have something that feeds on something else? As populations of the food go up, so do the things that want to feed off of it. So maybe those antagonists were building up at the same time along with the dollar spot and then when the conditions were favourable for some regrowth, the antagonists dominated and the dollar spot went down.”

Kaminski said superintendents might be doing themselves a disservice by spraying for dollar spot every two weeks, keeping it checked, yet taking the antagonists out as well.

His suspicion is that by knocking back the antagonists, “there’s nothing there to protect against it, and dollar spot goes nuts.”

In September, there is perhaps a bioshift in dollar spot, he added, noting there are other factors at play.
“The conditions get right for it, your budgets have shrunk, you’re trying to stretch the intervals, you’re tired… And remember, when that rebounds, it rebounds way harder than it did had you been controlling it the whole time or not controlling it at all. You stretch that window by a week, it takes off and goes nuts. I think that’s what’s happening.”

The curative control of dollar spot isn’t impossible, Kaminski said, but it requires a lot of fungicides.

He also didn’t rule out the possibility of a different strain of dollar spot in the fall. His research includes looking molecularly to determine if there is a difference in the isolates from spring to summer to fall.

Dollar spot is more conducive to settings where soil is dry, Kaminski said, adding drier soils are more prone to the disease. Watering consistently overnight will effectively combat dollar spot, he said, but it will promote brown patch and other diseases.

Rolling’s ability to slightly compress the thatch layer means less air and a less-than-ideal environment for the pathogen, leading to lesser disease. Less spraying will be required, and perhaps the rebound effect in the fall will be diminished. Rolling is also effective at removing dew.

Regular dew removal is an important practice toward dollar spot control, Kaminski said, adding anything that can be done to reduce leaf wetness duration, especially in the morning, is big.

Golf courses which have sufficient manpower may be able to dew drag their fairways daily, whether it is a mowing day or not. Dew dragging can be performed by two individuals in golf carts, working together to pull a lead rope. One individual can also use PVC pipe pulled behind a golf cart.

Kaminski said that when mowing achieves its dual purpose of also removing dew, problems can arise where the practice concludes on the golf course. If the final fairway is completed at 10 a.m., following the same daily mowing order, that particular fairway will be the one most susceptible to dollar spot.

“I always recommend knocking dew off for sure, and if you don’t and you’re mowing in certain patterns, you should mix that up and start with some of the ones that are your worst to get the dew off as early as possible.”

Otter Creek superintendent/manager Randy Booker said he used to regularly remove dew from his course during the immediate years following the golf course’s opening in 2009, but he has had to endure a 50 per cent staffing cut in recent years which has forced him to eliminate the practice.

Fairways are mowed Mondays, Wednesdays and Fridays by one individual. By the time the front nine is complete, the dew is almost gone on the back nine holes.

“So I don’t really get the chance to remove the dew before it’s burned off,” he said.

Kaminski admitted economic hardships can have a negative impact on a golf course’s well being. So, too, can a false sense of security.

He said it’s possible that a new or renovated golf course can look great for its first few years, but, because it’s a living and breathing system, it will ultimately succumb to the usual disease challenges.

“You may be able to get away for a year or two without aerifying or topdressing or verticutting marginally, but the reason we do that every year and multiple times a year is because we don’t ever want to get to the point where we’re in trouble.”
Kaminski said that when he sees golf courses with problems, it’s typically a case in which the superintendent figures he doesn’t need to do a certain thing that season so that he can get through a big tournament or other significant event without disruption to the course. After a couple of years of that mindset, a particularly hot and humid year sets in, and the golf course goes into decline.

“You may ask what happened before realizing you weren’t doing some of the things you should have been doing.”

Often, it’s a simple matter of communicating with club members to stress the long-term health importance of aeration and topdressing. Kaminski said members may ask why aeration holes are being punched into what appears to them as a pristine surface. It’s important to respond by saying the practice is being done to ensure conditions continue to look good into the future.

It’s usually not for reasons of economics that golf courses will back away from aerating and topdressing, but because members don’t want any disruption to their golf course, Kaminski said, adding the economy seems to be getting better.
One of the problems facing the industry in the United States, he said, is a lack of new students entering the industry, understanding that becoming a superintendent is a difficult undertaking.

With fewer people entering the industry, labour has become a big issue in the United States, he said.

“It’s a struggle to find labour.”

New technology is beginning the change the way a superintendent has become accustomed to doing his job. Moisture meters, for example, were introduced about 10 years ago, but only few courses had the devices. Today they are commonplace.

Kaminski said the meters are “awesome” and tell a much better story about a green’s condition than the eyeballing of a putting surface. The superintendent might believe a green is dry, but the meter might detect a significant amount of moisture in the soil.

With the aid of flying drones, thermal imaging of a golf course can be rendered, allowing superintendents to see damage and problems through specialized cameras “way before you can see it with your eye.” Thermal imaging can locate areas of a golf course where temporary solutions can be made, including the strategic placement of fans.

The cost of the drones equipped with thermal imaging cameras and such other technology as robotic mowers, which is still in its infancy, are currently expenses many golf courses cannot afford, but Kaminski said he figures they will be in place to a large degree within the next decade.

“As labour costs go up, the technology doesn’t seem as expensive.”

The turf academy included stops during the next three days at Credit Valley Golf Club in Mississauga, Cranberry Golf Resort in Collingwood, and the Oshawa Golf Club.