Messages from the brain must travel without interference through the spinal cord and out the nerves to every organ, cell, and tissue in the body 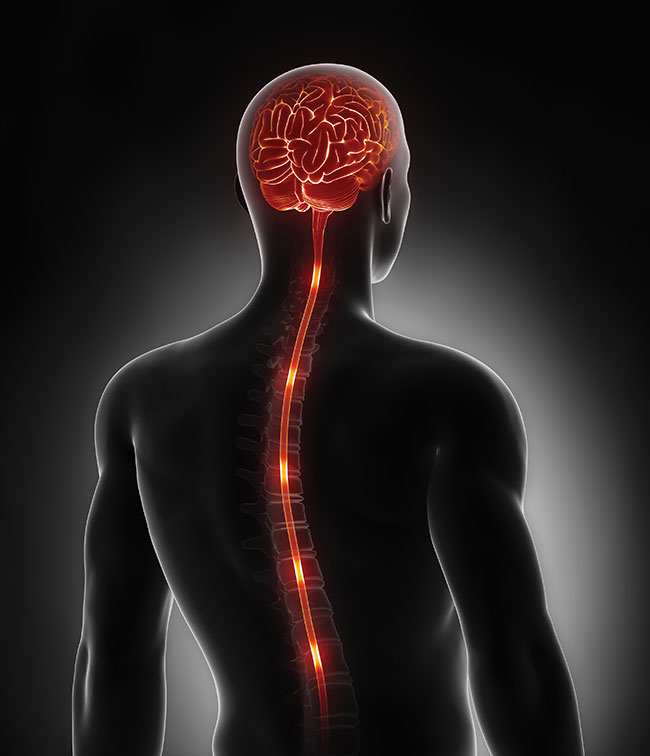 The brain and spinal cord are the keys for optimal health. Life flows from the brain, through the spinal cord and into every cell in the body. Photo credit: Cliparea.com/Adobe Stock

A healthy worker is apt to do a better job, will have the stamina and energy necessary to get through a full workday, and will be an asset to his or her company. Not all employees, however, may be entirely healthy, and many others may have health issues and not realize it.

Dr. Matthew Posa, a Milton, Ont. chiropractor, speaking in January at the virtually presented Landscape Congress conference, said a person’s health is regarded as his greatest asset, but many people don’t fully understand the concept of health.

“What is telling you if you’re healthy or not healthy?” he posed, adding the usual response is whether one looks good or feels well. Those who maintain a proper diet and exercise regularly may claim to be healthy if they look good and feel well. But instead of health being something people try to achieve regularly, it becomes something to which they react.

“You’re now being reactionary instead of being pro-active about your health,” Posa said, adding people tend not to do anything about their health until they begin to look bad and feel unwell. “The problem with reacting to health is you’re going to miss the top killer in our country today.”

Heart disease is ranked as the No. 1 cause of death among Canadians, yet 80 per cent of the time the first symptom experienced is death because of either a massive heart attack or a stroke.

“Eighty per cent of the time you don’t feel anything until you’re dead.”

Those who have died of a heart attack or stroke likely weren’t truly healthy, even if they ate well and exercised regularly, he said.

The No. 2 cause of death among Canadians is cancer, and everyone with cancer in his body is unaware of it until it’s diagnosed, Posa said.

“You can have cancer in your body and not know it. More people in Canada, and even the world, are dying of things they don’t even feel. That is scary and says a lot.”

The problem, Posa said, is that we live in a society in which we’re led to believe that the state of our health is based on how we look and feel. When someone begins to look or feel bad, he visits his doctor and is usually presented with two options: drugs or surgery. Symptoms of an ailment are the body’s way of sending a warning signal that something is amiss. Symptoms can include headaches, depression, blood pressure changes, heart rate issues, numbness, or any type of pain.

In the case of heart disease or cancer, symptoms may not be felt until it’s too late.

A worker may appear healthy and feel well, but may have underlying issues of which he isn’t aware. Photo credit: W Production/Adobe Stock

“If you don’t put out the fire, the building is going to burn down.”

If medication is used to deal with a health issue, does the problem still exist if the symptoms disappear? Posa said those relying on multiple medications aren’t living the kind of life they were meant to live and are mostly getting increasingly sicker.

“They spend their lives in an imprisoned body. If you continue to cover up the symptoms, the fire gets worse. It will burn brighter and hotter, and the disease process will get worse and worse by covering up symptoms.”

The “house” will eventually burn down, if attention isn’t given to the fire, he said.

Health is based on the way we function, Posa said, adding that when every organ, cell and tissue is doing its job and our bodies are functioning correctly, we are in a state of health. It’s in coherence. Food is the raw material needed to build the body while exercise is needed to get the body moving, changing, and adapting. Health is the optimal functioning of the body.

Yet it’s the brain that controls the body’s functions and where all life, health and healing reside, he said. Life flows from the brain into every cell within the body. Cells receive both electrical and mental impulses which are transmitted along the spinal cord and out through the nerve roots.

To achieve optimal health, we must ensure messages from our brain travel without interference through our spinal cord and out the nerves to every organ, cell, and tissue in the body.

“I want my brain to be aware of everything that’s happening so that it can respond and react accordingly without my body even knowing it and without me knowing it.”

When an area of the body is functioning poorly, it’s no longer healthy, Posa said, and is in a disease process. The problem among most people is that they base their health upon how they look and feel.

“You don’t hear it, smell it or taste it until the very end stage where you may start to feel pain symptoms, sickness or disease, or you may have the worst symptom of all which ends up killing you.”

Take care of the brain, spinal cord
This demands proper care for the brain and spinal cord, he said, because they are the body’s two most delicate tissues.

“You have everything inside your body to get better.”

The worst thing anyone can do, he said, is to treat symptoms or effects. Instead, the best thing is to correct the problem. Chiropractic medicine is not voodoo or pseudo-science, he added, noting it will take pressure off the nervous system so that the body better adapts. It turns the “light” back on.

When a nerve is damaged, it acts like a dimmer switch and dims the life, healing, and potential that those areas of the body deserve. Practitioners of chiropractic medicine use the term subluxation to describe a slight misalignment of the vertebrae which causes many health problems.

“You don’t know you have subluxation until you know and until you get it checked.”

The presence of subluxation presents interference that causes a degenerative neurological condition that can be changed. If pressure is removed from the nervous system, it enables the body to bounce back from interference. Although it’s not a cure for such conditions as heart disease, cancer, or diabetes, it allows the body to respond better.

“If you have cancer, where you have a disease process in your body and there’s interference, your body will be able to heal or bounce back or do what it needs to do to adapt by having less interference as you’re doing treatment for those conditions.”

The healing potential lies inside the body, Posa said, suggesting the key to optimal health is to take care of the nervous system. People tend to take better care of their cars, homes, and other possessions than they do their own health, he added.

Posa has been practising chiropractic medicine for 10 years and recently marked 150,000 patient visits.

Both his father and a sister are chiropractors.