For the first time in its history, Sports Turf Canada (formerly the Sports Turf Association) has a president from outside Ontario. 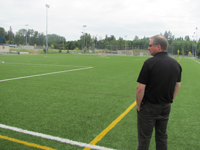 In recent years, Sports Turf Canada has established new relationships with provincial organizations in New Brunswick and British Columbia in an attempt to turn the once Ontario-based organization into a national body.

Buckner is past president of the Western Canada Turfgrass Association which had signed an agreement with Sports Turf Canada, stipulating that if prospective members who lived in British Columbia or Alberta wished to join the national association at a reduced rate, they would have to become a member of the WCTA first.

The move was designed to grow both associations.

“My personal objective is to grow the association nationally through regional partnerships.”

As part of his two-year term as Sports Turf Canada president, Buckner said he wishes to not only grow the national association, but develop relationships with such other industry organizations as the Southern Alberta Turfgrass Association and others, to work with them, help support them at the regional level and grow Sports Turf Canada.

“With the demographics of Canada, it’s hard if the national association doesn’t have a good relationship with the regional people and support them and then feed up from there.”

Buchner said he hopes to make some inroads from among the provinces currently not represented on the Sports Turf Canada board.

One strategy to boost a sense of national and regional cooperation is a first-ever joint collaboration between Sports Turf Canada and the WCTA this August for a field day in Calgary.

“Hopefully, maybe we’ll see something come from Saskatchewan potentially, or at least make a start. Maybe we can have a field day the next year or year after in Saskatchewan and try to expose ourselves.”

Another unique event Sports Turf Canada recently embarked upon was an educational program based on the First Green concept which uses golf courses as environmental learning labs for young school students. The “First Sports Field” event was held in May for Langley Secondary School Grade 9 students, providing an insight as to how sports fields are managed.

The project was a collaborative effort among Sports Turf Canada, the WCTA, Kwantlen Polytechnic University and the Township of Langley’s parks department.

“We’re going to talk about how irrigation systems work with electricity, valves and controllers, and things of that nature,” Buckner said in advance of the inaugural program.

Other stations dealt with soil chemistry and analysis, fertility, and cultural practices. The sessions were designed to challenge students to deal with situations using academic skills they already possess. For example, students were to use their math skills to calculate the amount of topdressing material required for a particular aerated area.

Mechanical instructors from Kwantlen Polytechnic University taught students the proper use of such equipment as backpack blowers, even initiating friendly competitions among the participants.

“It’s modeled after the First Green. We’re changing it up a little so that it’s more for sports fields than for golf. The basic concepts of fertility, soil science and cultural practices are somewhat similar, but not as intensive.”

Buckner said the group of students involved in the First Sports Field program were pursuing vocational studies at their school and could potentially develop enough of an interest in the subject that they may wish to further their studies at Kwantlen or another post-secondary institution which offers turfgrass management training.

He said he hopes the program was successful enough that it might one day expand into other parts of Canada.
“It’s very easy to put on. The difficulty with the golf course one is that schools generally have to bus the kids to the golf course, and there’s a cost involved.”

With school fields readily available, the program is much more mobile than its golf counterpart, Buckner said.
“You just have to have a willing teacher and a willing participant in the area to foster it.”

Later, when Buckner became president of WCTA, he met with former Sports Turf Association presidents Propedo and Paul Gillen at the annual WCTA conference in Victoria to discuss ideas for which the two organizations could assist one another.

A membership proposal was drawn up by the Sports Turf Association which was agreed upon by both organizations, and the affiliation has continued since.

Buckner said efforts are being made to tweak some of the Sports Turf Canada literature so that it includes a better perspective on matters of relevance to both the east and west coasts of Canada.

He said he wonders if perhaps Ontario should have its own regional association if Sports Turf Canada is to continue to pursue its “bottom up” approach to growing itself. The WCTA already represents British Columbia and Alberta, but suggested the possibility of both a prairie and Ontario association that would allow them “to feed up to a higher level. That’s a thought, and I’m not sure if that’s the proper way to do it, but we need to rejig the board a bit so that we have more national representation.”

In spite of the presence of four board directors from outside Ontario, Sports Turf Canada remains Ontario dominated.
“I want to be inclusive of everybody, but I want the regions telling us where they need the assistance. I don’t want us dictating and saying we’re going to do this and this and this. We want to work with them (provincial or regional associations) and hopefully grow both memberships to see the benefits of both.”

Buckner said the association is well equipped to tap into today’s technology so that board members don’t have to be physically present during key meetings. With representation coming from both Canada’s east and west as well as from Ontario, technologies such as Skype can be used  to allow all board members to have their say in real time without having to travel halfway across the country to attend meetings.

In the Township of Langley, Buckner is responsible for 67 natural fields—of which 95 per cent are sand-based—and six synthetic fields. He said before the synthetic fields became affordable, the area’s young soccer players were forced to practise on gravel, all-weather fields during the fall and winter. A couple of these fields still exist, but are being phased out.

The majority of the township’s fields are used for soccer during the fall and winter and for baseball in the spring and summer. Only a few fields are stand-alone for one sport or another. Because of the Lower Mainland’s moderate winter climate, soccer is a fall and winter sport, unlike in most other areas of Canada. Consequently, soccer and baseball are not played simultaneously.

Having synthetic fields at his disposal is another tool in the tool box, Buckner said. The synthetic playing surfaces are particulary attractive on the west coast because of its ample rainfall activity. This is especially true with soccer being a fall/winter sport.

“We need synthetic turf because we end up closing our natural grass fields quite a bit off and on.”

Even though the natural fields are largely sand-based, they can instantly become mud pits when subjected to 50 to 60 millimetres of rain.

He said most municipalities on the west coast allocate only 12 hours of play each week on natural turf fields during the rainy months whereas upwards of 64 hours of usage are provided for synthetic turf fields.

The absence of synthetic turf fields would result in otherwise cancelled games if they were to be played exclusively on natural turf.

“We still have to close synthetic turf sometimes because, with the moisture content, they’ll freeze and then they’re rock solid.”