Not even seven years ago, Greg Lampman was an employee of the Ford Motor Company in Oakville, Ont. Two months ago, he was named by Sports Turf Canada as its sports turf manager of the year.

The change in careers in 2010 began a journey for Lampman which has proven itself to be both successful and rewarding. 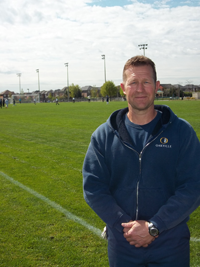 “I love what I do,” the Town of Oakville’s sports turf operator said, admitting he has no regrets over leaving his position of 10 years with Ford. “You can’t beat this (the town’s array of sports fields) as an office.”

Earlier in his working life, Lampman annually renewed a seasonal contract position with the Niagara Conservation Authority for a number of years before moving on to the Ford Motor Company.

“Once I was hired there (at Ford), I did everything in my efforts to get out of there. I didn’t like the roof and the walls.”

Lampman now believes he is in his element. Working largely outdoors, his primary focus is on overseeing the town’s more than 25 soccer and baseball fields which range from Class A to C.

He began his employment with the town as a seasonal crew leader in turf, but moved over to sports fields after one season. His superiors were impressed with his work ethic, and Lampman refined his qualifications through various educational pursuits, including the University of Guelph’s turf manager’s short course.

Lampman said one of the aspects of his career he appreciates most is the relationship he has with his superiors, including Jane Arnett, senior manager of operations of parks and open space, who is a past president of Sports Turf Canada (the Sports Turf Association during her tenure).

“It’s hard not to succeed in this job when you have the kind of support you have from your management team,” he said, noting he is frequently given the opportunity to freely experiment with different products and techniques. “If there’s an idea that has some promise, we definitely research that idea and if we think it holds merit we’ll pick a field and do an experiment on it.”

Given the freedom “to think outside the box” has paid off handsomely for Lampman in his quest to provide the town’s playing fields with the best possible conditions.

One such strategy was the use of chicken manure as a fertility supplement which he used on soccer field goal mouths.
“I just did it on a whim. I just took a few bags of chicken manure out one day and thought I’d do my own study on this and see how it works.”

The goal mouth areas, which typically undergo the most wear of any location on a soccer field, were able to endure more play before showing wear. Realizing positive results, Lampman began to use the manure on his entire fields last season.

“I thought there was a drastic improvement, so you couple that with your regular fertilizer program and it’s a nice supplement.”

He said he likes the fact that it’s a natural product and contains a healthy amount of macronutrients.
“It’s incredible. The turf loves it.”

Lampman said he has also had good success with worm castings.

Working with a generous budget has proven to be advantageous to Lampman, who said it has allowed him to be experimental in his maintenance practices. Knowing of his experimental tendencies, several suppliers will approach him with different products to use in various trials.

Most of the fields for which Lampman maintains are classified as A or B with only a handful of Cs. Class A fields are those which are both irrigated and lit, and some are fenced in. Class B fields tend to be just lit while Class C fields are mainly school fields or smaller playing surfaces that are neither irrigated nor lit.

The Class A fields are given a higher priority and are used for premier league play. They are typically tackled first thing in the morning while the remaining fields and other projects are looked after during the afternoon.

“I’ll make sure my fields are spotless, and tend to any repairs that need to be done so there are no safety issues.”
Days usually begin with a staff meeting at the department’s central office to go over what needs to be done that day. Lampman said his work detail is never dictated to him as his superiors understand he knows best of all what needs to be accomplished.

“They pretty much let you do what you need to do. It’s a pretty cool concept with a lot of trust.”

One of the challenges he faces on a regular basis is the amount of use each of his fields undergoes. Ideally, usage of a Class A field should not exceed 750 hours annually, but one field at the Oakville Soccer Club’s premier complex on Pine Glen Road saw about 2,200 hours of usage.

A field at the complex used largely by an elementary school next door is also subject to an excessive number of hours and undergoes wear from soccer, track and field events, recess play time, and several other activities.

The average hourly amount of usage of the fields at the soccer complex ranges between 1,500 and 1,700 hours yearly. Although the fields are owned by the soccer club, the town has been commissioned to maintain them.

The abundant use of the Class A fields leads to excessive wear which Lampman must constantly address. He said it’s a matter of aerating and relieving compaction as best as possible, “dumping” seed and adding fertilizer or a supplement “to give the grass a little bit of a punch that it needs.”

Even beyond the fields’ scheduled use, other people will use the fields after hours, contributing to their wear.

“It affects play when you have bare spots. But we’re also a publicly-funded entity, and we have to keep the taxpayers happy. You can’t close your fields.”

The town’s Class A fields were aerated during the second week in May. Using small aerators, Lampman will additionally aerate such high-traffic areas as goal mouths and around players’ benches every two weeks, seeding afterward to maintain a good seed bank.

During dandelion season, the outer perimeter of the fields bear a distinctive bright yellow colour with a multitude of the weed, but the playing surface itself is devoid of dandelions.

“People are constantly questioning me whether we’re using chemicals. This is a perfect example of proper IPM practices, proper irrigation and proper fertilizing. I really can’t take full credit for that.”

Contributing to the fields’ conditions is a dedicated irrigation and IPM department in Oakville.

“They run a really tight program.”

The town also has dedicated cutters who mow the fields at 21/2 inches and will provide crisp lines during tournament play.

Like other turf professionals, including golf course superintendents, Lampman emerged from the winter of 2013-14 with plenty of turf damage caused by extended periods of ice cover.

“The ice storm did tons of damage. It was unbelievable. We had tons of bare spots.”

Lampman said dealing with his fields’ user groups proved to be an educational process in the winter’s aftermath. Fielding concerns from others, he filled them in on what happened as well as plans to rectify the damage.

The Oakville Soccer Club is the largest user group of the town’s fields, and Lampman said he has developed solid relations with the organization over the years.

“It’s a great relationship,” he said, adding he will deal with its personnel face to face rather than via other means of communication.

Mother Nature was much kinder to Lampman this spring as compared with the previous two years. Seeding his goal mouth areas this spring, however, didn’t at first produce the results he wanted. Not wishing to sod the goal mouth areas, the new seedlings’ growth was a bit stunted at the outset, but the addition of some starter fertilizer helped warm them up to the point where “they just exploded.”

In addition to two major soccer field complexes and other fields used for the sport, Lampman oversees a number of baseball fields, most of which have baseball mix infields, as well as a field hockey surface that is currently set up for mini-soccer but will be reverted back for its intended sport in late summer.

Some of the town’s high school fields are managed by Lampman, but those surfaces’ upkeep are subject to lesser budgets than those earmarked for Class A fields. Nevertheless, he said there is sufficient funding available to ensure they pass monthly field safety inspections.

Lampman recently became certified in synthetic field maintenance and safety inspections. He currently looks after two artificial fields and will soon inherit the management of a third which is being resurfaced for play by the local soccer club. Even with the synthetic fields, there are user groups which specifically wish to play their games on the natural fields “because it’s a whole different game.”

Earning the title of Sports Turf Canada’s sports turf manager of the year has been “humbling” for Lampman.