Features Landscaping
Select the right seed for your turf cover 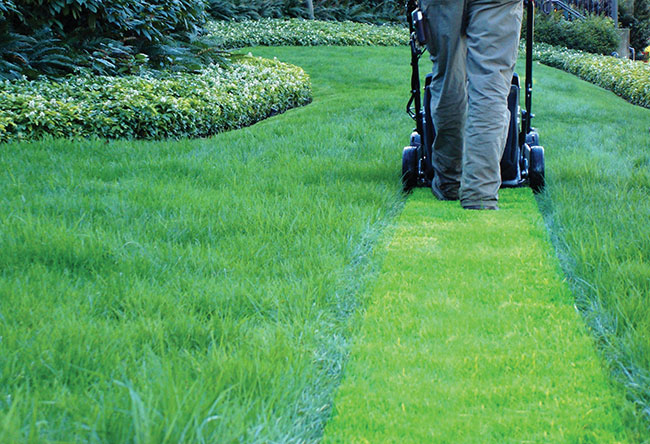 Mowing heights tend to be based on species and variety. Some will allow lower mowing heights. Photo credit: © Horticulture / Adobe Stock

Selecting the right seed is crucial if the goal is to establish a resilient lawn that requires minimal pest management. When selecting turfgrasses, it’s actually genetics that are being selected, says the director of the Guelph Turfgrass Institute.

“With turf, we have to really pay attention to management because the management we put on the turf changes the environment greatly,” he said.

Among the management tasks that have a particular bearing are mowing heights and mowing frequency, he said, adding some turf species respond well if the one-third rule is broken while others fare poorly. Other cultural practices such as aeration and thatch control, and how often they’re done, will influence the type of grass desired for a green, tee or fairway in a golf course setting.

“There’s a lot going on in turf that aren’t there for other things,” he said. “When we talk about what variety is best, it really depends on how you’re going to use it.”

Fine fescue and Colonial bentgrass, for example, are grown on the greens at the Old Course at St. Andrews in Scotland. The bentgrass type provides a “backbone” to the greens during the winter months because the fescue fades away without a sufficient number of sunlight hours.

Lyons said lab tests show fine fescue can survive the least amount of sunlight the most.

“It’s not really shade tolerant or low light tolerant. It just has a muted response to shade which means it grows better in shade.”

Mowing heights are based on species and variety, he said, noting tall fescue and Kentucky bluegrass can be mowed fairly low, yet tall fescue can also fare well at three centimetres. Some perennial rygrasses can survive as low as a half-centimetre. Within a species, certain cultivars can be mowed lower than others.

Sports such as soccer and rugby demand playing surfaces are mowed low. Many such sports fields are grown to perennial ryegrass due to its low mowing tolerance in comparison with Kentucky bluegrass.

Lyons said if the ideal mowing height for most Kentucky bluegrasses is two inches, and if it’s taken down to a half-inch, it’s slower to recover from divoting than if it’s left to the higher height. He said Kentucky bluegrass can survive OK when mowed as low as one centimetre, but between four and 2½ centimetres it reaches a threshold where it becomes much less competitive with weeds.

“That is a big deal on home lawns and sports turf.”

Raise your mowing height
The often-heard advice to mow higher to reduce the amount of weeds is true when the height is raised to 1½ inches from an inch, but Lyons said adjusting to two inches from 1½ inches shows no change in weed populations, according to studies.

There are few parks and sports fields being mowed below two inches, he said, adding mowing at a height of about 2¾ inches isn’t going to have much of an impact on broadleaf weed invasion.

Kentucky bluegrass can be mowed low as long as there is good management and weed control that doesn’t let up. Without such control, it could impact the choice of seed that’s purchased, Lyons said.

Attributes of Kentucky bluegrass include stress tolerance and the ability to withstand winter, drought and wear. Its stress tolerance is due primarily to its rhizomes, yet mowing heights are limited and it should be blended. Because its growing points are below ground, it’s protected from winter desiccation, extremely low air temperatures and ice damage.

Although perennial ryegrass has some winter issues, it grows well, is quick to germinate, has good seedling wear tolerance, has a wide range of mowing tolerance, has endophytes which prevent feeding among chinch bugs, is ideal for overseeding and has a bunch-type growth habit. Conversely, perennial ryegrass doesn’t have the same survival ability as Kentucky bluegrass, and, at lower mowing heights, some varieties are susceptible to grey leaf spot.

There are several varieties of fine fescue. It has a muted shade response and, because of this, it doesn’t respond to shade as quickly as many other grasses and doesn’t change its growth habits. Fine fescues tolerate a wide range of mowing heights, from a few millimetres to about seven centimetres. They have a low traffic tolerance, especially in the heat. Lyons said if fine fescue is mowed on a hot day, the mower’s wheel marks will still be visible a day or two afterward.

Tall fescue, on the other hand, has limited mowing heights and struggles below three centimetres. It, however, has a range of quality and growth habits, and has superior heat tolerance and superior growth during drought. Although it greens up early in the spring if there’s no snow mould, it tends to be slow in wear recovery. It also has moderate ice encasement survival. 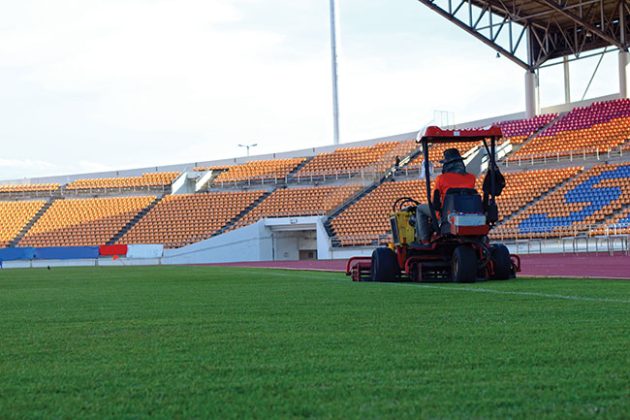 Some sports, including soccer and rugby, demand lower mowing heights. To meet that demand, the right turf species must be present.
Photo credit: © Oilslo / Adobe Stock

The right cultivar
Choosing the right cultivar can be difficult, Lyons said, because they’re often not listed, especially in lawn and sports field mixes. Creeping bentgrass mixes, however, will almost always list the cultivar.

He said most suppliers are willing to supply whatever information is needed.

A good way to learn more about the various varieties of seed is from the National Turfgrass Evaluation Program (NTEP), but valuable information can also be obtained from the Turfgrass Water Conservation Alliance (TWCA) and the Alliance for Low Input Sustainable Turf (A-LIST).

Because turf has no yield, it has to be assessed and brings in the human allowance to determine how it’s assessed. Such considerations include colour, tiller density and root depth.

Lyons said Kentucky bluegrass cultivars should be blended, with at least three cultivars and from different types and classifications.

“We need different types in the same blend so that they look good together.”

Each type in the mix plays a specific role, such as one being more drought resistant while another may be more dense or more aggressive. If one variety becomes susceptible to a disease such as powdery mildew a year after establishment, the others can carry through, he said.

When overseeding, however, perennial ryegrass will provide a quick fill-in, good seedling wear tolerance and persistence in traffic.


Related
Options abound for overseeding of sports fields
Understanding the importance of turfgrass selection and the benefits of overseeding
Poa supina worth looking at as overseeding option on sports fields
It may be expensive, but supina bluegrass can help maintain turf coverage in high traffic