THE humanitarian efforts of a group of Canadians engaged in the turfgrass industry have resulted in the construction of a new soccer field for 165 orphaned children in the Dominican Republic. 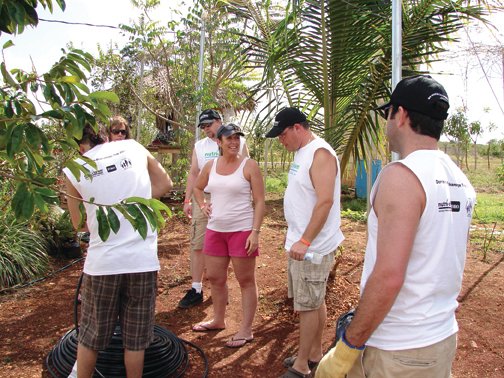 A team of 12 volunteers, made up of Nutri-Lawn franchisees, its corporate president, its director of operations, and the Canadian sales manager from The Toro Company spent a week at the improverished Caribbean country in January, constructing a playable field for the Nuestros Pequeños Hermanos orphanage and installing an irrigation system for its community garden.

The trip was organized by Nutri-Lawn’s “re:nourish” program which, since 2008, has contributed to worthy projects considered environmentally sustainable and which encourage community health.

“An important part of our re:nourish program is to reach out to communities beyond where we currently operate and live,” said Ryan Vincent, president of Nutri-Lawn.

Jordan Lavin, director of operations for Nutri-Lawn, organized the
Dominican trip, recruiting franchisees from across Canada, who each
antied up $2,500 to participate. The Nutri-Lawn initiative was
conducted in conjunction with the non-profit Friends of the Orphans
(FOTO) organization, an Illinois-based agency which, for more than 40
years, has worked to end the cycle of poverty by giving safe and loving
homes to children in the Caribbean and Latin America.

Lavin, who said the orphanage’s inhabitants range in age from infancy
to later teenage years, noted the children had previously played soccer
on a rocky, dirt field. Injuries to the children were numerous, and it
was felt a safer, built-to-specifications field could be constructed in
its place. His team’s goal was to reconstruct the field in one week’s
time, complete with an inground sprinkler system.

Nuestros Pequeños Hermanos, which is Spanish for “our little brothers
and sisters,” is located in the town of San Pedro de Macoris, “well off
the beaten track,” Lavin said.

Rebuilding the field’s soil structure was considered to be the most
arduous aspect of the project. Lavin arrived at the job site several
days in advance of the others to initiate the grading and finalize all
arrangement for equipment and supplies. The original plan was to seed
the field, but sodding became the more practical method to establish
its surface.

A total of 35,000 square feet of bermudagrass sod was trucked in from a
local supplier, but Lavin said it arrived in “chunks” rather than
rolls. Fifteen local workers were hired to help lay the sod, completing
the job in four days.
“It turned out all right when we were done,” Lavin said, adding the laying of sod chunks proved particularly challenging.

Before sod could be laid, several rocks needed to be removed from the
open field. Construction equipment was borrowed from a local Nick
Faldo-designed golf course maintained by Troon Golf, to aid in the
stone removal process. A trencher borrowed from the course was
instrumental in the installation of irrigation line. About 2,000 feet
of 11/2-inch PVC pipe was donated for the project by Corripo, a large
manufacturer and distributor in the Dominican Republic.

Another 1,500 feet of drip tube was installed in the garden where the orphanage grows its own vegetables.
“As we were working on the field, we also had a crew working on an
irrigation system for the community garden that produces all the
vegetables for the orphanage,” Lavin said. “There is an onsite,
pre-existing well that was used to fill buckets by hand, and then the
water was poured onto the plants. With the new, fully-automated system
that draws its water from the local well, we are saving a huge expense
of energy that can now be refocused.”

The soccer field project, from start to finish, was a labour of love
for the team of volunteers, who endured long hot and humid days in
which the January temperature averaged 30 degrees Celsius every day.
“All the guys there were really into it,” Lavin said.

In addition to rebuilding the field, the Canadian volunteers took with
them 10 hockey bags filled with other donated items to complete the
experience for the young benefactors. The items included soccer shoes,
jerseys and shin pads for everyone as well as medical supplies.

“We went with a purpose,” Lavin said.

Throughout his stay in the Dominican Republic, Lavin maintained a
regular blog to keep others at home informed of ongoing developments as
well as his personal experiences.

An example of his shared thoughts:

“The kids at the orphanage are great kids…very respectful, well
behaved and very well off as far as quality of life compared to the
rest of the country. To be submerged in the poverty that surrounds the
NPH property for 10 days really put things in perspective for me. When
an entire village of 300 people share two outhouses—one with a
door—that makes you appreciate the luxury that we live in. When
65-year-old men are at the end of a shovel all day to earn a meager $5
to feed his family rice, that pulls on your emotional side.”

Lavin said the team ideally wanted to pay the local hired help more
than the $5-per-day standard, but had to be careful not to set a
precedent, knowing how much the full-time staff at the orphanage earned.

At the heart of Nutri-Lawn’s re:nourish program is its company motto,
“We nourish lawns and lives.” The company believes that nurturing
communities, both near and far, is manifested through giving
communities back their greenery.

“In the orphanage, team building occurs in the classroom and also on
the playing field,” Vincent said. “Seeing the excitement and wonder in
the eyes of the 160 children when they were released from school and
were able to run and play on the field for the first time, is a moment
I will not soon forget.”

A local worker was trained to both use the irrigation system and to
properly maintain the field on a weekly basis. Damon DiGiorgio, course
superintendent at Roco Ki Golf Course, which lent its trencher to the
volunteers, agreed to periodically check on the field’s condition once
the Canadians returned home.

Lavin said the volunteer team was able to overcome the language barrier
through the assistance of a couple of Peace Corps personnel from the
United States who acted as interpretors.

Other businesses, including Green Financial in Woodstock, Ont. and
Transcontinental, made financial or in-kind contributions toward the
project.