To celebrate a brand new $1-million renovation of the Cherry Hill Golf Course near Fort Erie, Ont., members officially cut the ribbon and inaugurated the new course with a ceremonial teeoff as part of its recent men’s opening day activities. 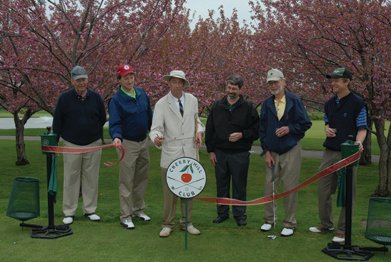 Travis, portrayed by Cherry Hill member Mike Reynolds, was on hand to assist with the ribbon cutting and to hit the first ball in the ceremonial teeoff. Also on hand to officiate were club president Kingman Bassett, Jr. and 2008 president Robert P. Borneman. Representing the Walter J. Travis Society was Ed Homsey of Stafford Country Club.

Ian Andrew, of Ian Andrew Design and Weir Golf Design, was the architect for the renovations, which include reconstruction of all bunkers with Travis-style grass faces and surrounding mounds as well as several new tee locations and a major pond expansion. Andrew spoke to the membership about Travis, and conducted a tour of select holes, while explaining the rationale for improvements and strategic shot options presented by the new improvements which were designed to reflect the style of Walter Travis.